OCEAN BEACH (KUSI) – We have an update now on the Ocean Beach Pier, which has been locked down for more than three months.

According to an engineering report obtained by the “OB Rag,” the damage done over the years is a lot worse than people have been told. 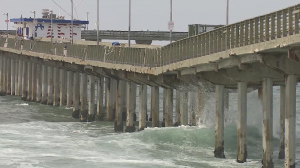 An engineering report from 2019 shows the lowest point on the pier to be the weakest link, where most of the serious damage is happening.

“In a nutshell, if the City doesn’t get really in front of this — and they haven’t yet — and start working a plan to retrofit, or to fix the issues — the pier could be closed indefinitely,” Mark Winkie from Ocean Beach Town Council said.

But repairs from the city could be coming as soon as next week.

Dan Plante joins us live now from the Ocean Beach Pier with the very latest.