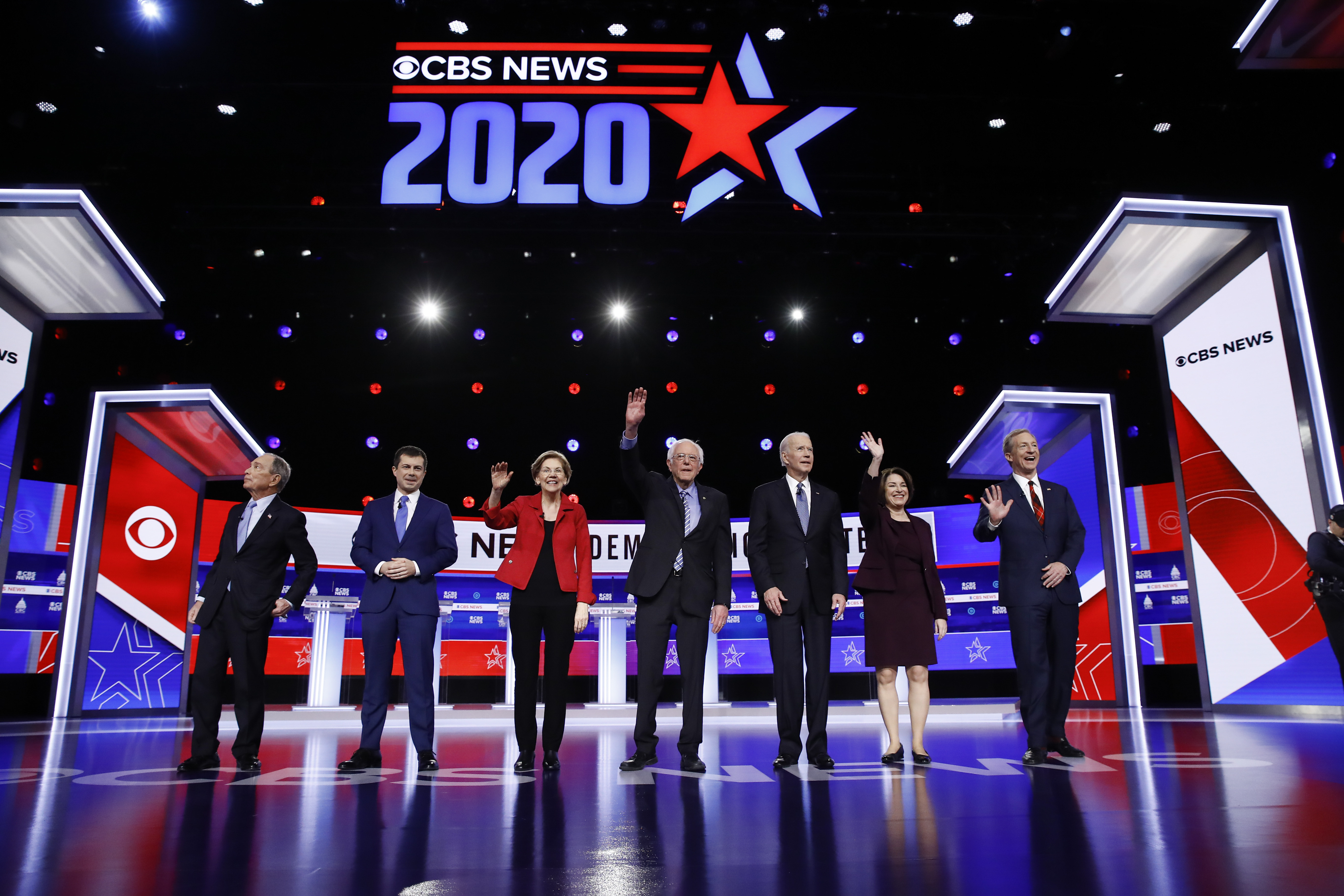 Here are some key takeaways.

Bernie Sanders is rarely a quiet voice, but he has managed to get through nine debates with few bruises. That ended Tuesday night when he was attacked on multiple fronts by every opponent.

The overarching themes: Sanders can rile up a crowd but can’t get things done. He is unelectable as a democratic socialist. He will drag down the Democratic House majority.

Sanders parried some of the blows but also got into shouting matches. Asked by a moderate how he’d pay for his plans, he responded coolly, “How many hours do you have?”

Centrist Democrats who hoped the Vermont senator would come off as not electable may be heartened, but so could Sanders’ supporters who see their candidate as passionate and authentically unpolished.

BLOOMBERG TRIES TO BOUNCE BACK

The good news for Bloomberg is this debate didn’t go as badly as the last one. The bad news is no one is grading on the curve.

He ceded prime target status to Sanders, but took his share of criticism. He still got scratched and occasionally came off as brittle.

Massachusetts Sen. Elizabeth Warren continued to be his nemesis, slamming him for funding Republican senators and for accusations that women at his company were mistreated. She brought up an allegation that Bloomberg had told a pregnant woman in his employ to “kill it” — which Bloomberg heatedly denied.

Later, he tried to make a joke about how everyone else onstage should have been scared to show up “after I did such a good job of beating them last week.”

The joke was one of many he offered up that didn’t land. A comedian’s timing he does not possess. A billionaire’s wallet, though, he does. And he bought advertising for the commercial breaks during the debate.

Former Vice President Joe Biden has called South Carolina his “firewall,” even before his dismal finishes in Iowa and New Hampshire. If he gets the breakthrough he needs, it probably won’t be because of a sterling debate performance.

Biden seemed as comfortable as he has on any Democratic debate stage since the first encounters last June. But he little to offer a new rationale for his candidacy.

He emphasized his affinity for issues dear to black voters and reminded them of his decades-long advocacy.

Overall, it was a steady performance when Biden most needed it. And he expressed some confidence. Pressed on whether he’d drop out if he doesn’t win Saturday, Biden declared, “I’m going to win South Carolina.”

WARREN’S CASE AGAINST SANDERS (AND BLOOMBERG)

Warren had to make a difficult straddle at the debate — she wanted to spotlight her liberal positions to pry voters from front-runner Sanders, but she also had to make a pitch for why they should back her rather than him.

She has been hesitant to fully voice her criticism of Sanders but leaned into it Tuesday night. “Bernie’s winning right now because the Democratic Party is a progressive party and progressive ideas are popular ideas,” she said.

Warren also reprised her attacks on Bloomberg, which might not help her win votes, but clearly helps her raise money.

BUTTIGIEG: ANOTHER GOOD NIGHT, BUT WILL IT MEAN VOTES?

If the race were about skill on the debate stage, it might be hard to deny Pete Buttigieg the nomination. He continued to answer questions with calm and clarity, and showed he could throw an elbow too.

But his path forward is still unclear, given that his support is overwhelmingly white — and the Democratic electorates in most upcoming primaries are not.

Buttigieg helped lead the moderates’ charge against Bernie Sanders, almost mocking the idea of a general election between Sanders and President Donald Trump. “Imagine spending the better part of 2020” listening to such a match-up, he pondered.

It added up to another consistent performance for Buttigieg. The question is whether that will mean anything at the ballot box.

KLOBUCHAR FIGHTS TO BE HEARD

The star of the New Hampshire debate had to fight to be heard in Charleston.

Klobuchar pulled out some of her go-to lines — like the one about checking with the duck hunters in her family as she formulates gun control policies — but she was often cut off by moderators for going over her time.

She consistently made the case for a Midwestern moderate as the best candidate to take on Trump. She hammered Sanders on the cost of his plans.

And she had one striking moment, when she was asked about coronavirus and said the issue was too serious for politics. “I’m not going to give my campaign website,” Klobuchar said. Instead, she pointed viewers to CDC.gov, the website for the Centers for Disease Control and Prevention.

But she had a hard time breaking through at a time she may have needed it most.

Tom Steyer has pinned his hopes on snatching South Carolina from Biden. But on Tuesday he looked like someone whose momentum has been yanked away.

Steyer spluttered after Biden accused him of investing in private prisons as a hedge fund manager. He condemned both Sanders and Bloomberg as unelectable but never was able to make a clear case for himself.

Without a clear win in South Carolina, it’s hard to see how Steyer wins anywhere else.

The moderate, anti-Bernie lane remains crowded. So crowded that several candidates couldn’t agree on a strategy to clear some of the space.

Buttigieg acted as if Biden wasn’t on the stage at all, trying to make himself the clear alternative to Sanders. Biden and Bloomberg barely acknowledged one another. Klobuchar and Buttigieg did not renew their blood feud.

The jumble underscores the uncertainty of the race beyond the reality that Sanders is still the front-runner. He’s not a commanding one yet. But he may not have to be if the moderate muddle continues.

The seven white Democratic presidential candidates took turns offering various reasons black voters should support them. Some attacked their rivals — or struggled to defend their own records.

Steyer said he’d spent his career and his political activists fighting for, among other things, “racial justice.” But Biden went after him, too, for his investments in private prisons.

The scenes highlight the oddity of an all-white slate of presidential candidates in party where about four out of 10 voters are non-white. It’s even more stark in South Carolina, where black voters are likely to make up more than 60% of the primary electorate.

When they weren’t attacking each other on race, several candidates found ways to name drop Rep. Jim Clyburn, the House majority whip and the most influential Democrat in the state. Clyburn is expected to endorse a candidate Wednesday.

The Latest: Scottish city in lockdown after virus cluster