WASHINGTON (AP) — President Donald Trump expressed qualms Monday about extending the current 15-day shutdown recommended by the federal government, even as his officials warned that the coronavirus crisis is deepening and Congress and the White House struggle to complete a nearly $2 trillion economic rescue package.

In all capital letters, he tweeted: “We cannot let the cure be worse than the problem itself. At the end of the 15-day period, we will make a decision as to which way we want to go.” His suggestion that the remedies may be more harmful than the outbreak contradicts the advice of medical experts across the country.

WE CANNOT LET THE CURE BE WORSE THAN THE PROBLEM ITSELF. AT THE END OF THE 15 DAY PERIOD, WE WILL MAKE A DECISION AS TO WHICH WAY WE WANT TO GO!

House Speaker Nancy Pelosi assailed Trump’s apparent wavering on the federal response and statements he’s made about the pandemic that some of his public-health officials have had to walk back. 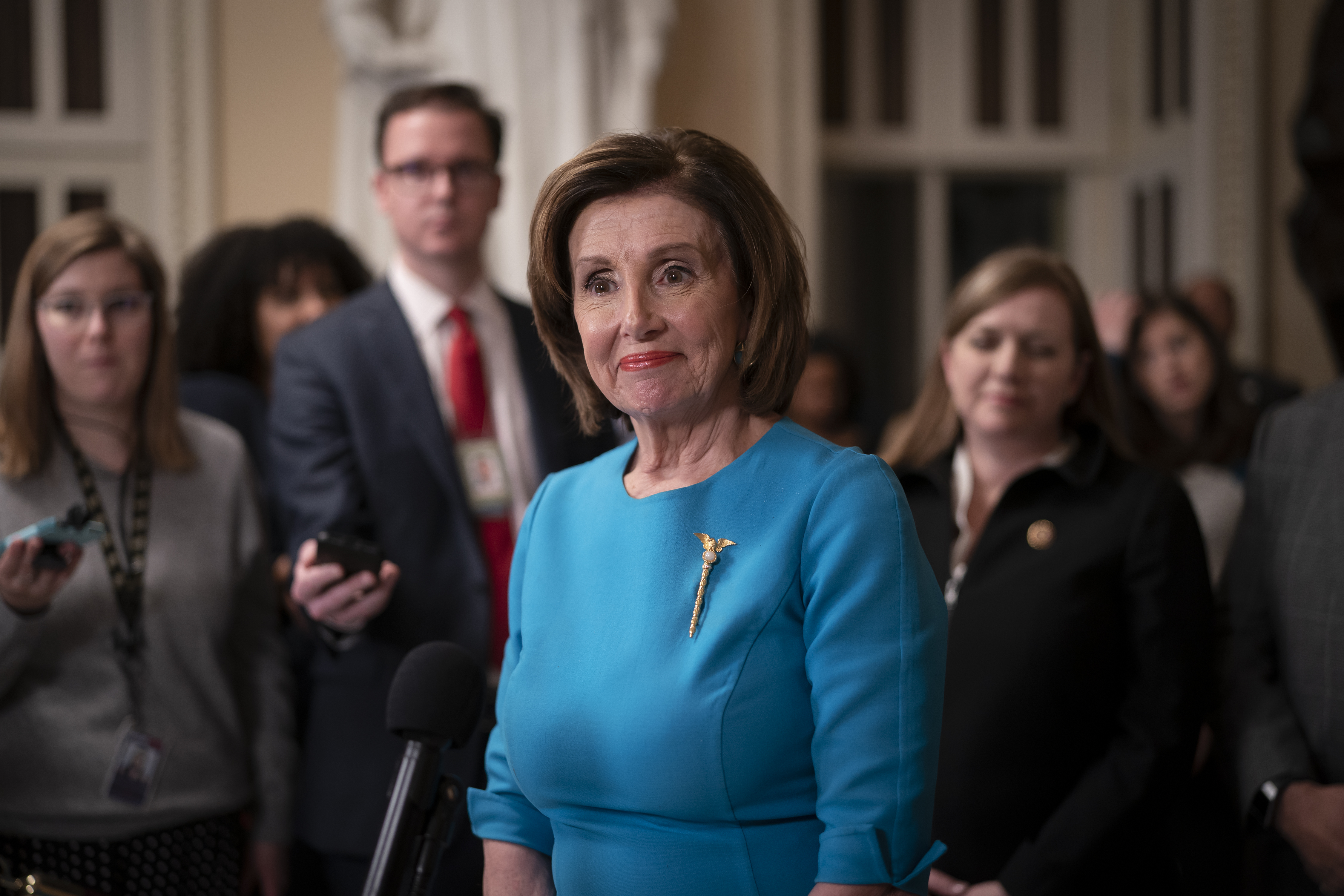 Speaker of the House Nancy Pelosi, D-Calif., pauses as she makes a statement ahead of a planned late-night vote on the coronavirus aid package deal at the Capitol in Washington, Friday, March 13, 2020. (AP Photo/J. Scott Applewhite)

“He’s a notion-monger, just tossing out things that have no relationship to a well coordinated, science-based, government-wide response to this,” she said on a health-care conference call. “Thank God for the governors who are taking the lead in their state. Thank God for some of the people in the administration who speak truth to power.”

A week ago, the White House came out with a “15 Days to Stop the Spread” plan that encouraged Americans to work from home and avoid bars, restaurants and discretionary travel, as well as groups of more than 10 people. It also told older Americans and those with serious underlying health conditions that they should stay home and away from other people.

Since then, states that have become hot spots for the virus have implemented even more radical measures, which the White House has applauded.

Yet on Sunday, Vice President Mike Pence said the country should expect new federal guidance “which will make it possible for people that have been exposed to return to work more quickly with — by wearing a mask for a certain period of time.”

On Monday, Treasury Secretary Steven Mnuchin was back on Capitol Hill after officials worked through the night on the massive economic rescue plan.

“It’s going well,” Mnuchin told reporters as he shuttled through the halls. Tempers flared and emotions were raw after days of wrangling over critical aid, but the top Senate Democrat, Chuck Schumer of New York, said: “We’re very close to reaching a deal.”

At the Capitol, the virus has struck close. Republican Sen. Rand Paul of Kentucky said he tested positive for coronavirus, and is now among five senators now under self-quarantine. Several other lawmakers have cycled in and out of isolation. And the husband of Sen. Amy Klobuchar, D-Minn., is in a hospital with pneumonia after testing positive, she said Monday.

Democrats had derailed the aid plan Sunday night, arguing it was tilted toward corporations and did too little to help workers and health care providers. Schumer said earlier the bill would “affect this country and the lives of Americans, not just for the next few days, but in the next few months and years — so we have to make sure it is good.”

As talks progressed, Pelosi said she would roll out a bill later Monday to push ahead on Democratic priorities.

“It’s time to get with the program, time to pass historic relief,” McConnell said as he opened the chamber. “The eyes of the nation are on the Senate.”

.@SenateMajLdr Mitch McConnell slammed Democrats for for blocking a massive coronavirus bill that would have provided relief for American families and businesses.

Trump has also balked at using his authority under the recently invoked Defense Protection Act to compel the private sector to manufacture needed medical supplies like masks and ventilators, even as he encourages them to spur production. “We are a country not based on nationalizing our business,” said Trump, who has repeatedly railed against socialism overseas and among Democrats.

“Trump keeps saying he’s a wartime president,” Biden said in an online address from his Delaware home. “Well, start acting like one.”

On the economic front, the Federal Reserve announced Monday it will lend to small and large businesses and local governments as well as extend its bond-buying programs as part of a series of sweeping steps to support the flow of credit through an economy ravaged by the viral outbreak.

With a population on edge and shell-shocked financial markets entering a new work week, Washington labored under the size and scope of a rescue package that’s more ambitious than any in recent times — larger than the 2008 bank bailout and 2009 recovery act combined.

Democrats say the largely Republican-led effort does not go far enough to provide health care and worker aid and fails to put restraints on a proposed $500 billion “slush fund” for corporations. They voted to block its advance.

Democrats won a concession — to provide four months of expanded unemployment benefits, rather than just three as proposed, according to an official granted anonymity to discuss the private talks. The jobless pay also would extend to self-employed and so-called gig workers.

But Republicans complained Democrats were holding out for more labor protections for workers, wanting assurances that corporations taking federal aid will commit to retaining their employees.

Alarms were being sounded from coast to coast about the wave of coronavirus cases about to crash onto the nation’s health system.

New York City Mayor Bill de Blasio said from the pandemic’s U.S. epicenter: “April and May are going to be a lot worse.” On NBC’s “Meet the Press,” he all but begged Washington to help procure ventilators and other medical supplies and accused the Republican president of “not lifting a finger” to help.

Trump urged Congress to get a deal done and, during the Sunday briefing, responded to criticism that his administration was sluggish to act. He cited his cooperation with the three states hardest hit — New York, Washington and California — and invoked a measure to give governors flexibility in calling up the national guard under their control, while the federal government covers the bill.

But even as Trump stressed federal-local partnerships, some governors, including Republican Greg Abbott of Texas, expressed unhappiness with Washington’s response. The president himself took a swipe at Democratic Gov. J. B. Pritzker of Illinois, saying that he and “a very small group of certain other Governors, together with Fake News” should not be “blaming the Federal Government for their own shortcomings.”

The urgency to act is mounting, as jobless claims skyrocket and financial markets are eager for signs that Washington can soften the blow of the health-care crisis and what experts say is a looming recession.

Central to the package is as much as $350 billion for small businesses to keep making payroll while workers are forced to stay home. There is also a one-time rebate check of about $1,200 per person, or $3,000 for a family of four, as well as the extended unemployment benefits.

Hospitals would get about $110 billion for the expected influx of sick patients, said Treasury Secretary Steven Mnuchin.

Democrats have warned the draft plan’s $500 billion for corporations does not put enough restraints on business, saying the ban on corporate stock buy-backs is weak and the limits on executive pay are only for two years.

For most people, the new coronavirus causes only mild or moderate symptoms, such as fever and cough. For some, especially older adults and people with existing health problems, it can cause more severe illness, including pneumonia. The vast majority of people recover from the new virus. According to the World Health Organization, people with mild illness recover in about two weeks, while those with more severe illness may take three to six weeks to recover. 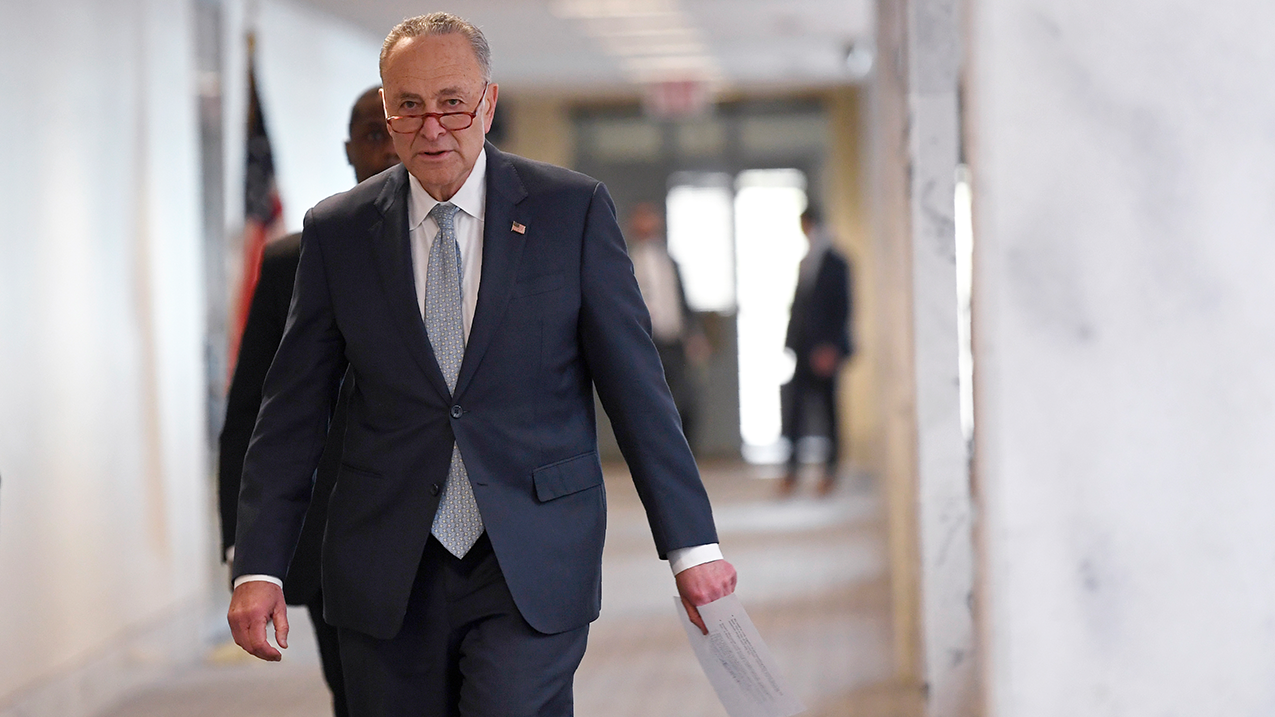 Senate Minority Leader Sen. Chuck Schumer of N.Y., arrives for a meeting on Capitol Hill in Washington, Friday, March 20, 2020, to work on an economic relief package regarding the coronavirus. (AP Photo/Susan Walsh)