Democrats grapple with Mueller’s finding of No Collusion; GOP exclaims ‘move on’

WASHINGTON (AP) — Disappointed Democrats grappled with special counsel Robert Mueller’s findings on Monday, calling evening strategy sessions as Republicans gleefully called for them to “move on.” President Donald Trump accused those responsible for launching Mueller’s Russia probe of “treasonous things against our country” and said they “certainly will be looked into.”

Trump said the release of Mueller’s full report “wouldn’t bother me at all” as the Democrats clamored for the Justice Department to release the entire document and not just Sunday’s four-page summary from Attorney General William Barr.

Barr’s letter said Mueller did not find that Trump’s campaign “conspired or coordinated” with the Russian government to influence the 2016 presidential election — knocking down arguments from Democrats who have long claimed there was evidence of such collusion.

But Mueller reached no conclusion on whether Trump obstructed the federal investigation, according to Barr’s summary, instead setting out “evidence on both sides” of the question and stating that “while this report does not conclude the president committed a crime, it also does not exonerate him.” Absent a recommendation from Mueller, Barr stepped in and decided there wasn’t sufficient evidence to establish that the president obstructed justice. 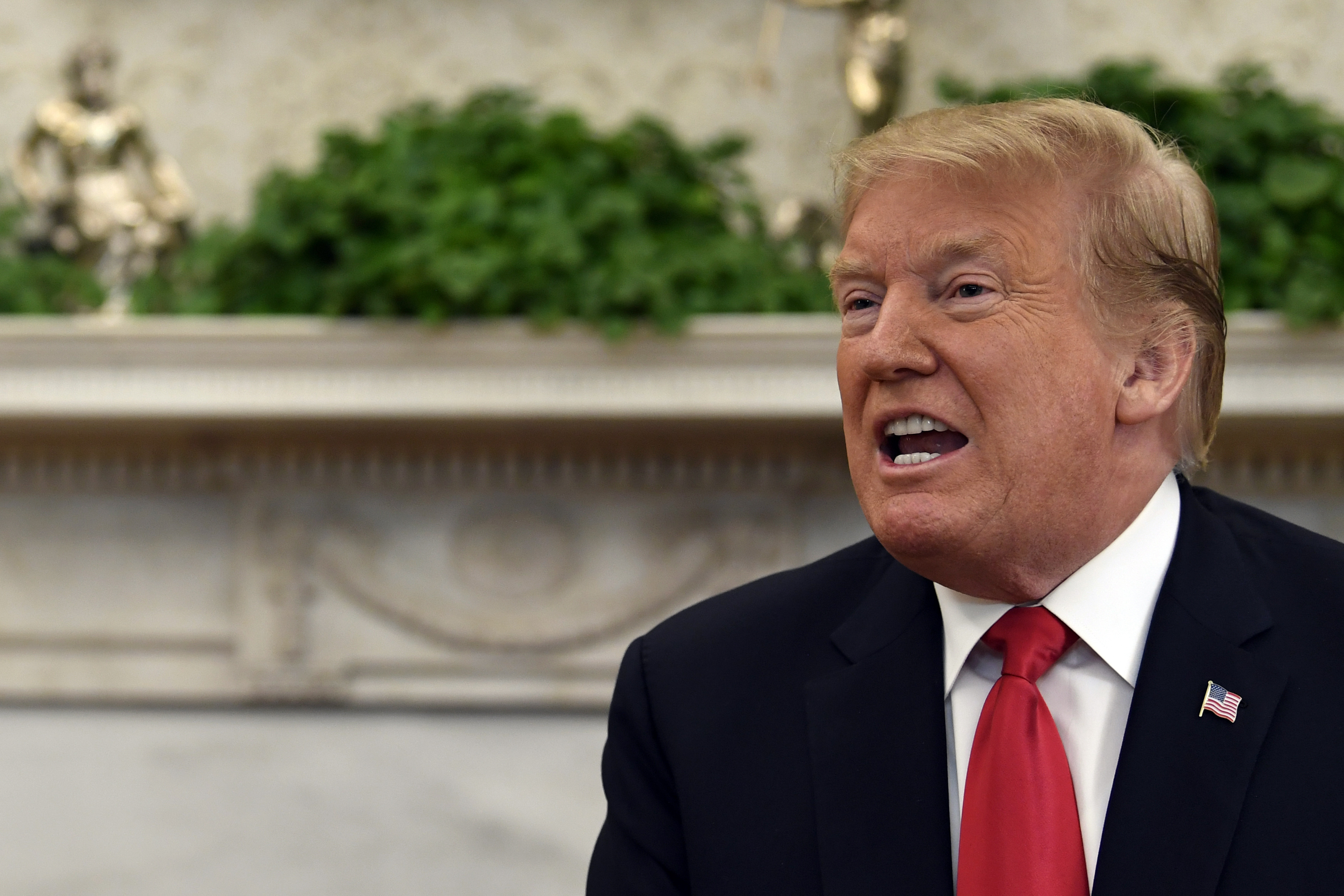 President Donald Trump speaks in the Oval Office during a meeting with Israeli Prime Minister Benjamin Netanyahu at the White House in Washington, Monday, March 25, 2019. Trump said the release of special counsel Robert Mueller’s full report “wouldn’t bother me at all” as congressional Democrats demanded that the Justice Department hand it over quickly. Trump’s remarks came as Democrats planned to huddle behind closed doors Monday evening to figure out how to move forward with their own investigations on obstruction of justice and Russian collusion.. (AP Photo/Susan Walsh)

Trump, his spokesmen and leading congressional Republicans all claimed total vindication for the president anyway. Questioned by reporters, Trump said he welcomed Mueller’s results but complained he had been abused by the investigation occurring at all and taking too long.

“We can never let this happen to another president again,” he said. “There are a lot of people out there that have done some very evil things, very bad things, I would say treasonous things against our country.”

“Those people will certainly be looked at. I’ve been looking at them for a long time. And I’m saying why haven’t they been looked at. They lied to Congress. Many of them you know who they are.”

He didn’t name names, but Trump has spent months railing against former Justice Department officials, including former FBI Director James Comey, accusing them of an illegal witch hunt for the purpose of delegitimizing his presidency. He has also falsely claimed that the investigation was based on memos compiled by former British spy Christopher Steele, and even blamed former Sen. John McCain, who died last year, for passing the memos to the FBI.

The investigation began months before the FBI saw the dossier — and the FBI already had a copy by the time McCain turned it in.

Ahead of their Monday meetings, Democrats discussed strategy in a flurry of calls over the weekend. House Speaker Nancy Pelosi and Senate Minority Leader Chuck Schumer talked repeatedly, including several calls Sunday from her home in San Francisco. As soon as Barr’s letter arrived, Pelosi quickly convened a call Sunday with the Democratic chairmen of major House committees.

In a joint statement, Judiciary Committee chairman Jerrold Nadler, intelligence committee Chairman Adam Schiff and Oversight and Reform Committee chairman Elijah Cummings seemed to concede that collusion had not been found, saying they had confidence in Mueller, “notwithstanding the very public evidence of Trump campaign contact with and willingness to receive support from Russian agents.”

Still, they said, “it will be vital for the country and the Congress to evaluate the full body of evidence collected by the special counsel, including all information gathered of a counterintelligence nature.”

Monday on Capitol Hill, GOP lawmakers called for Congress to move on. “This is done with,” said House Majority Leader Kevin McCarthy. “It is time for the country to move forward.”

At the same time, however, Republicans followed Trump’s lead in looking into how the investigation began. Senate Judiciary Committee Chairman Lindsey Graham promised to “unpack the other side of the story” of the Russia investigation.

Graham, who spent the weekend with Trump in Florida, said his committee will probe the actions of the Justice Department. Still, he said the investigation was legitimate and had to happen in order to answer questions about Russian interference in the 2016 election.

The South Carolina Republican also had a warning for Trump using his pardon power to help those who were ensnared by Mueller’s investigation.

“If President Trump pardoned anybody in his orbit, it would not play well,” Graham said.

Among those whom Mueller charged during the course of his investigation were the president’s former campaign chairman, Paul Manafort, and his first national security adviser, Michael Flynn. Five Trump aides pleaded guilty and a sixth, longtime confidant Roger Stone, is awaiting trial on charges that he lied to Congress and engaged in witness tampering.

Sunday evening, before most lawmakers had returned from a break, Pelosi and Schumer said in a joint statement, “The fact that Special Counsel Mueller’s report does not exonerate the president on a charge as serious as obstruction of justice demonstrates how urgent it is that the full report and underlying documentation be made public without any further delay,”

Democrats seem more likely to focus on their multiple investigations of the president, calls for transparency and frustrations with Barr rather than engaging in the talk of impeachment that has been amplified on Pelosi’s left flank. As the release of Mueller’s report loomed, she recently tried to scuttle that talk by saying she’s not for impeachment, for now.

But Mueller’s report hasn’t dissuaded some of Trump’s fiercest critics among the new Democratic lawmakers who helped flip the House from Republican control. By the end of the month, Rep. Rashida Tlaib, D-Mich., is still planning to introduce her resolution calling for the Judiciary Committee to investigate grounds for Trump’s impeachment.

No Collusion: The ONLY News That's Fit To Print. pic.twitter.com/YGCEyHTL3K

Now that @POTUS @realDonaldTrump has been vindicated, I’m sure House Democrats will move on to more important things like eliminating planes, cows, and buildings.

One thing is clear, as the Attorney General states, the Special Counsel’s report does not exonerate the President on the serious charge of obstruction of justice. This is why the entire report and all the underlying documents must be made public. #ReleaseTheReport