DES MOINES, Iowa (AP) — Democratic party officials in Iowa worked furiously Tuesday to deliver the delayed results of their first-in-the-nation caucus, as frustrated presidential candidates claimed momentum and plowed ahead in their quest for the White House.

In a statement early Tuesday, the Iowa Democratic Party blamed a “coding issue in the reporting system” that it said has since been fixed. The problem kept party officials from releasing results from Monday’s caucus, the much-hyped kickoff to the 2020 primary. It was an embarrassing twist after months of promoting the contest as a chance for Democrats to find some clarity in a jumbled field with no clear front-runner.

Instead, caucus day ended with no winner, no official results and many fresh questions about whether Iowa can retain its coveted “first” status.

State party officials said “our plan is to release results as soon as possible” later Tuesday. It said it had verified the accuracy of the collected data and said the problem was not a result of “a hack or an intrusion.”

The statement came after tens of thousands of voters spent hours Monday night sorting through a field of nearly a dozen candidates who had spent much of the previous year fighting to win the opening contest of the 2020 campaign and, ultimately, the opportunity to take on President Donald Trump this fall.

The candidates didn’t wait for the party to resolve its issues before claiming, if not victory, progress and moving on to next-up New Hampshire.

“It looks like it’s going to be a long night, but we’re feeling good,” former Vice President Joe Biden said, suggesting the final results would “be close.”

Vermont Sen. Bernie Sanders said he had “a good feeling we’re going to be doing very, very well here in Iowa” once results were posted. “Today marks the beginning of the end for Donald Trump,” he predicted. 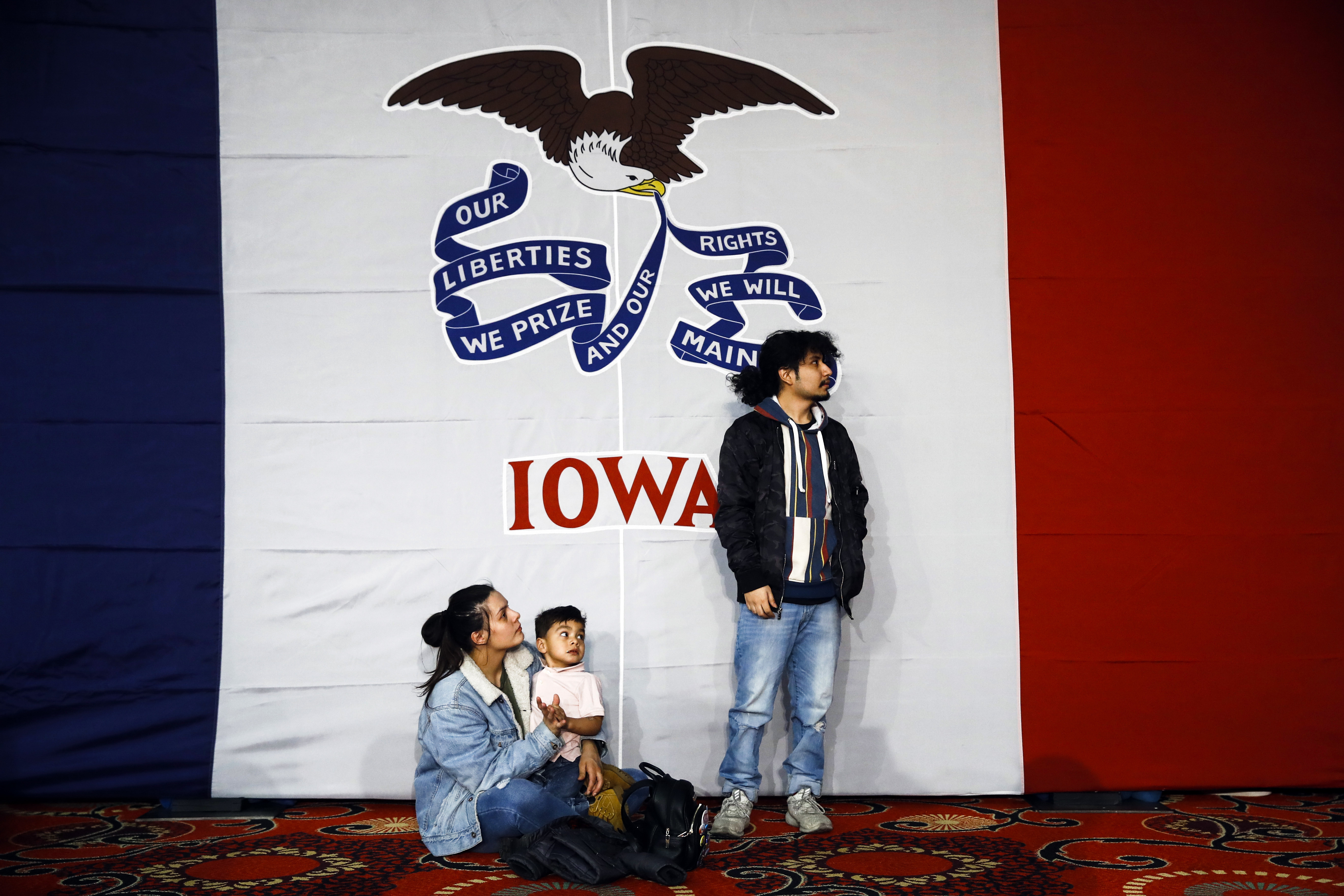 “Listen, it’s too close to call,” Massachusetts Sen. Elizabeth Warren said. “The road won’t be easy. But we are built for the long haul.”

And Pete Buttigieg, the former mayor of South Bend, Indiana, was most certain.

“So we don’t know all the results, but we know by the time it’s all said and done, Iowa, you have shocked the nation,” he said. “By all indications, we are going on to New Hampshire victorious.”

Democrats faced the possibility that whatever numbers they ultimately released would be questioned. And beyond 2020, critics began wondering aloud whether the Iowa caucuses, a complicated set of political meetings staged in a state that is whiter and older than the Democratic Party, are a tradition whose time had passed.

The party has tried to accommodate critics, this year by promising to report three different data points about voters’ preferences, presumably improving transparency. But the new system created new headaches.

State party spokeswoman Mandy McClure said it had “found inconsistencies in the reporting of three sets of results,” forcing officials to try to verify results with “underlying data” and the paper trail.

Some of the trouble stemmed from issues with a new mobile app developed to report results to the party. Caucus organizers reported problems downloading the app and other glitches.

Des Moines County Democratic Chair Tom Courtney said the new app created “a mess.” As a result, Courtney said precinct leaders were phoning in results to the state party headquarters, which was too busy to answer their calls in some cases.

Shortly before 2 a.m., the state party was making plans to dispatch people to the homes of precinct captains who hadn’t reported their numbers. That’s according to a state party official in the room who was not authorized to share internal discussions publicly.

Earlier in the night, Iowa Democrats across the state cast their votes, balancing a strong preference for fundamental change with an overwhelming desire to defeat Trump. At least four high-profile candidates vied for the lead in a contest that offered the opening test of who and what the party stands for in the turbulent age of Trump.

It’s just the first in a primary season that will span all 50 states and several U.S. territories, ending at the party’s national convention in mid-July.

For Democrats, the moment was thick with promise for a party that has seized major gains in states since Trump won the White House in 2016. But instead of clear optimism, a growing cloud of uncertainty and intraparty resentment hung over the election as the prospect of an unclear result raised fears of a long and divisive primary fight in the months ahead.

One unsurprising development: Trump won the Republican caucus, a largely symbolic victory given that he faced no significant opposition.

The president eagerly seized on the Democrats’ problems.

“The Democrat Caucus is an unmitigated disaster,” Trump tweeted early Tuesday. “Nothing works, just like they ran the Country.” He added: “The only person that can claim a very big victory in Iowa last night is ‘Trump.’”

The Democrat Caucus is an unmitigated disaster. Nothing works, just like they ran the Country. Remember the 5 Billion Dollar Obamacare Website, that should have cost 2% of that. The only person that can claim a very big victory in Iowa last night is “Trump”.

Big WIN for us in Iowa tonight. Thank you!

Pre-caucus polls suggested Sanders entered the night with a narrow lead, but any of the top four candidates — Sanders, Biden, Warren and Buttigieg — was positioned to score a victory. Sen. Amy Klobuchar, who represents neighboring Minnesota, was also claiming momentum, while outsider candidates including entrepreneur Andrew Yang, billionaire activist Tom Steyer and Hawaii Rep. Tulsi Gabbard could be factors.

“We know one thing: We are punching above our weight,” Klobuchar said late Monday, promising to keep fighting in New Hampshire.

About one-quarter of all voters reported that they were caucusing for the first time, according to AP VoteCast, a survey of voters who said they planned to take part in Monday’s Democratic caucuses. The first-timers were slightly more likely to support Sanders, Warren or Buttigieg, compared with other candidates.

At the same time, VoteCast found that roughly two-thirds of caucusgoers said supporting a candidate who would fundamentally change how the system in Washington works was important to their vote. That compared to about a third of caucusgoers who said it was more important to support a candidate who would restore the political system to how it was before Trump’s election in 2016.

The 2020 fight has already played out over myriad distractions, particularly congressional Democrats’ push to impeach Trump, which has often overshadowed the primary and effectively pinned several leading candidates to Washington at the pinnacle of the early campaign season.

Meanwhile, ultrabillionaire Mike Bloomberg, the former mayor of New York City, is running a parallel campaign that ignored Iowa as he prepares to pounce on any perceived weaknesses in the field come March.

The amalgam of oddities was building toward what could be a murky Iowa finale before the race pivoted quickly to New Hampshire, which votes Feb. 11.

For the first time, the Iowa Democratic Party planned to report three sets of results: a tally of caucusgoers’ initial candidate preference; vote totals from the “final alignment” after supporters of lower-ranking candidates were able to make a second choice; and the total number of State Delegate Equivalents each candidate receives.

There is no guarantee that all three will show the same winner when they’re ultimately released.

The Associated Press will declare a winner based on the number of state delegates each candidate wins, which has been the traditional standard.

The Democrat Party in Iowa really messed up, but the Republican Party did not. I had the largest re-election vote in the history of that great state, by far, beating President Obama’s previous record by a lot. Also, 97% Plus of the vote! Thank you Iowa!

It is not the fault of Iowa, it is the Do Nothing Democrats fault. As long as I am President, Iowa will stay where it is. Important tradition! https://t.co/bX3FLvua1C

For three years, we’ve been preparing for the process that officially kicks off tonight in Iowa: the Democratic presidential primary. Today our chair, @TomPerez, reflects on the reforms we’ve made to make this the most transparent primary in our history: https://t.co/8w7gtSfqil