OSAKA, Japan (AP) — With a smirk and a finger point, President Donald Trump dryly told Russia’s Vladimir Putin “Don’t meddle in the election” in their first meeting since the special counsel concluded that Moscow extensively interfered with the 2016 campaign.

Democrats on Capitol Hill were quick to criticize the president, saying he was making light of Russian meddling in the 2016 election. It was the two leaders’ first meeting since special counsel Robert Mueller said that while Moscow intervened, he could not establish a criminal conspiracy between Russia and the Trump campaign.

The moment at the Group of 20 summit in Osaka echoed one of the most defining moments of Trump’s presidency in Helsinki, Finland. There, he pointedly did not admonish Putin about election interference and also did not side with U.S. intelligence agencies over his Russian counterpart. 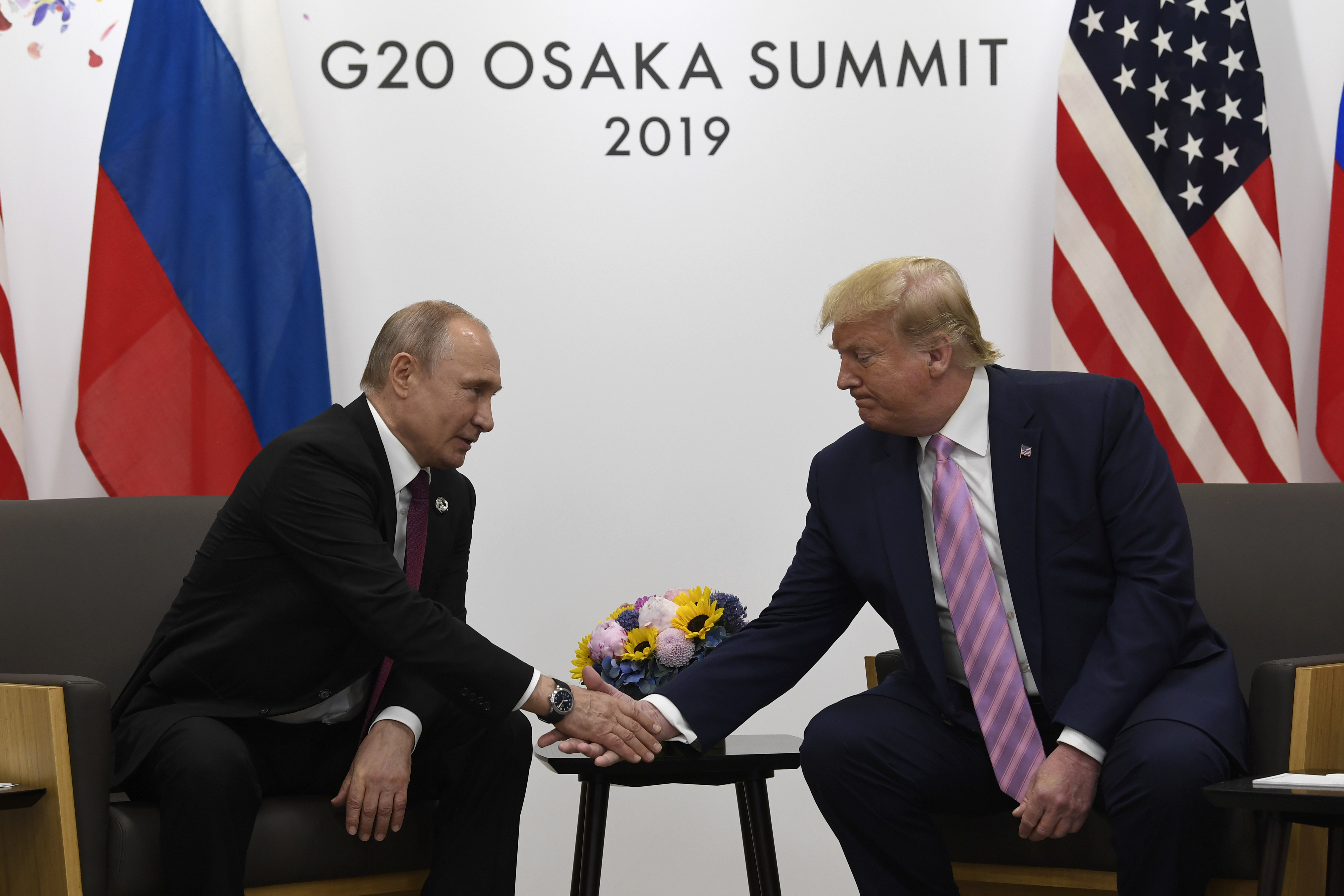 Trump and Putin traded brief remarks Friday, the first time they sat together since Helsinki, about issues they planned to discuss when a reporter asked Trump if he would warn Putin not to meddle in the 2020 election.

“Of course,” the president replied. Then he turned to Putin and facetiously said, “Don’t meddle in the election.” He playfully repeated the request while pointing at Putin, who laughed.

Senate Minority Leader Chuck Schumer said the joke is on America and “Putin’s the only one laughing.”

New York Rep. Hakeem Jeffries, a member of the House Democratic leadership, said election meddling is “not a laughing matter.”

Trump said he enjoyed a “very, very good relationship” with Putin and said “many positive things are going to come out of the relationship.” The Kremlin says Putin has invited Trump to visit Russia next year to mark the 75th anniversary of the allied victory in World War II.

Putin has repeatedly dismissed the Mueller report’s conclusion that Russia had systemically interfered in the 2016 U.S. election, telling the Financial Times earlier this week that it was “mythical interference.”

Putin said that what really happened was that Trump saw changes in American society and took advantage of them.

Putin, who has highlighted national populist movements in Europe and America, told the newspaper that he thinks liberalism — the main political ideology in the West since the end of World War II — is dead.

He praised Trump for trying to stop the flow of migrants and drugs from Mexico.

“This liberal idea presupposes that nothing needs to be done — that migrants can kill, plunder and rape with impunity because their rights as migrants have to be protected,” Putin said in the FT interview.

“Every crime must have its punishment. The liberal idea has become obsolete. It has come into conflict with the interests of the overwhelming majority of the population.”

While Trump has long placed a premium on establishing close personal ties with Putin, his administration has increased sanctions and other pressures on the Russian government.

The United States and Russia also are on opposing sides of the escalating crisis with Iran, which shot down an American drone last week. Trump nixed a possible retaliatory air strike, but says the U.S. remains firm that Tehran should not have nuclear weapons and that it needs to stop supporting militant groups. “There’s absolutely no time pressure,” Trump said. “I think that in the end, hopefully, it’s going to work out. If it does, great. And if doesn’t, you’ll be hearing about it.”

At a summit last November in Argentina, Trump canceled his meeting with Putin over Russia’s seizure of two Ukrainian vessels and their crew in the Sea of Azov. Those crew members remain detained, yet Trump opted to forge ahead with the Osaka meeting. Trump said Friday alongside Putin that the fate of the sailors had yet to be discussed.

The leaders also have announced their withdrawal from a key arms control pact, the 1987 Intermediate-Range Nuclear Forces Treaty. It is set to terminate this summer, raising fears of a new arms race. Another major nuclear agreement, the New Start Treaty, is set to expire in 2021 unless Moscow and Washington negotiate an extension.

The White House said after Friday’s meeting that the leaders agreed to keep talking about a “21st century model of arms control,” which Trump said needs to include China. In addition to Iran, the two leaders also discussed Syria, Venezuela and Ukraine. The U.S. and Russia are on opposing sides on those three issues too.

But the backdrop of U.S.-Russia relations remains Moscow’s 2016 election interference.

Though the meeting occurred in the early morning hours back in the United States, some were quick to denounce the president’s comments. Michael McFaul, who was U.S. ambassador to Russia under Barack Obama, tweeted that he found Trump’s conduct “depressing.”

“Trump’s admiration and appeasement of Putin is so bizarre,” he wrote. “I can’t think of one concrete U.S. interest that has been advanced by Trump’s behavior.”

The sit-down with Putin came amid a gauntlet of negotiations on international crises and trade wars. The president is to meet on Saturday with Chinese President Xi Jinping. Trump said he believed there was “a very good chance” they could make progress toward ending their trade dispute.

Trump also is keeping an eye on the race to replace him back home. Ten Democrats met in Miami, Florida, as part of the first debates of the 2020 presidential race.

“I just passed a television set on the way here. I saw that health care and maximum health care was given to 100% of the illegal immigrants coming into our country by the Democrats,” Trump said, telling German Chancellor Merkel during their meeting that a debate the previous night “wasn’t very exciting.”

Later, while meeting with Brazil’s president Jair Bolsonaro, Trump segued from a discussion on the crisis in Venezuela to declare that he had heard a rumor that the Democratic Party will change its name to the Socialist Party. “I’m hearing that, but let’s see if they do it,” Trump said.

There have been no such rumors.