Dispatchers received a 911 call around 9:45 p.m. Thursday from a person reporting that a man in an apartment in the 3100 block of Cauby Street had cut his own throat with a knife and the knife had been taken away from the man, San Diego police Lt. Anthony Dupree said.

Officers responded to the location and the man’s family member let them into the apartment and led them to a back bedroom, Dupree said. When officers approached the man in the bedroom he allegedly pulled out a knife from his jacket pocket and raised it up toward officers.

The officers then drew their weapons and ordered the man to back up, but the man continued to advance on the officers with the knife pointed at them, the lieutenant said.

One of the officers then fired his weapon at the man, striking him at least once in the upper body, Dupree said.

Officers administered medical aid until paramedics arrived and transported the man to a hospital with life-threatening injuries, he said.

It was unclear if the man, whose name was not immediately available, had cut his own neck with the knife.

The officer who shot the man is a six-year veteran of the San Diego Police Department, Dupree said. The officer’s name was not immediately available.

Homicide detectives were called in to investigate the officer-involved shooting. 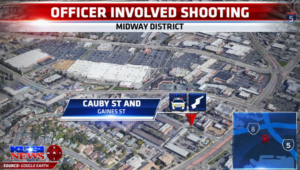