During the interview, Press asked Perez to share his thoughts on the 28-year-old socialist’s primary win over Rep. Crowley who is the fourth most powerful Democrat in Congress. Perez responded by saying, “She represents the future of our party. She ran a spirited campaign. I have great respect for Joe Crowley. Joe Crowley is a good Democrat – one of the sponsors of the Medicare for all bill.” You can watch the interview here.

Ocasio-Cortez is a dues paying member of the New York City Democratic Socialists of America. That group has recently called to abolish profit, prisons, cash bail, and borders. Ocasio-Cortez has not yet endorsed those goals, but she has called for abolishing ICE.

CNN reports a number of different factors that likely catapulted Ocasio-Cortez shed light on the new Democratic party and where they could be headed for the 2020 presidential nomination.

A day before Alexandria Ocasio-Cortez, 28, clinched her remarkable Democratic primary victory in New York’s 14th Congressional District, she took a moment to note how she was being described in the political press.

“A Girl Has No Name: Headlines from the Political Patriarchy,” she tweeted. In the tabloids and on some local television stations, she was, over and again, simply Rep. Joe Crowley’s “primary opponent.”

A Girl Has No Name: Headlines from the Political Patriarchy pic.twitter.com/xohAiHSk3b

A little more than 24 hours later, that’s beginning to change. Ocasio-Cortez, fresh off a thorough defeat of the 10-term incumbent, the No. 4 House Democrat, is quickly becoming a household name.

Her win on Tuesday caps off a remarkable ascent — which will likely make her the youngest person in Congress come 2019. Should she defeat her Republican opponent, she will arrive in Washington with a clear progressive agenda — to push for “Medicare for all,” the abolition of US Immigration and Customs Enforcement and legislation to drag big money out of politics.

Ocasio-Cortez’s own story begins in the Bronx, the same borough that, along with parts of Queens, delivered for her on primary day. She was born and raised there, the daughter of Puerto Rican parents — her father born in the South Bronx (he died in 2008, while she was in college); her mother on the island — she went on to study at Boston University and work in the the office of liberal lion Sen. Ted Kennedy of Massachusetts.

When she returned home, Ocasio-Cortez worked as a community organizer and, eventually, with economic stresses rooted in the recession and the loss of her father taking hold, began low-wage, long-hour work at restaurants to help support her family.

During the 2016 presidential season, she worked as an organizer for Sen. Bernie Sanders, who ran in the Democratic primary. In 2017, Ocasio-Cortez launched her campaign to unseat Crowley, the powerful Democrat who chairs the party in Queens County.

Her candidacy began to gain traction — and Crowley, who hadn’t been challenged in more than a decade, started to show his weakness — earlier this year. Crowley drew the consternation of The New York Times editorial board for failing to show up to a debate against his opponent, citing scheduling conflicts.

Speaking to CNN’s Poppy Harlow Wednesday morning, Ocasio-Cortez emphasized that her campaign reached doors not usually “knocked on” by the Democratic establishment: “young people … communities of color, people who speak English as a second language, working class people, people with two jobs that are usually too ‘busy’ to vote.” 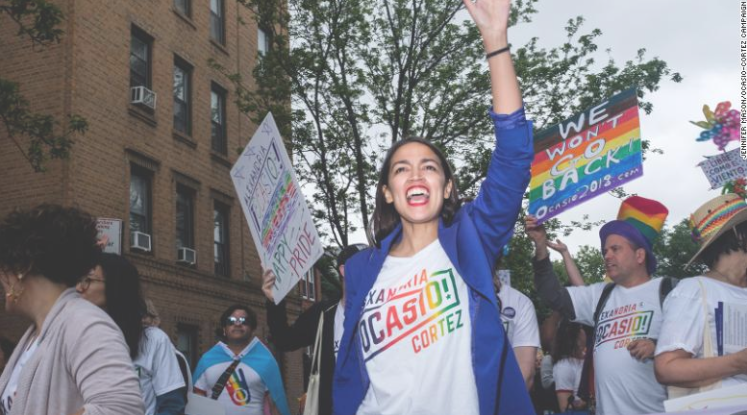 “When people feel like they are being spoken directly to,” she said on “CNN Newsroom,” “I do feel like … they’ll do things like turn out in an off-year, mid-year primary.”

Though he outraised Ocasio-Cortez, a member of the Democratic Socialists of America, by a jarring 10-to-1 margin, her bid was super-charged with the release of an online ad late last month produced by a pair of fellow DSA members.

“Women like me aren’t supposed to run for office,” Ocasio-Cortez says at the outset of the two-minute ad.

Anyone familiar with New York’s machine politics would have been hard-pressed to dismiss the line as common campaign rhetoric. After Tuesday night, it’ll be just as difficult to ignore Ocasio-Cortez.

KUSI wants to hear Your Voice, let us know what you think on our Facebook post below.