Doormen fired for failing to intervene in anti-Asian attack

NEW YORK (AP) — Two New York City apartment building workers have been fired for failing to help an Asian American woman as she was being violently attacked on the sidewalk outside. 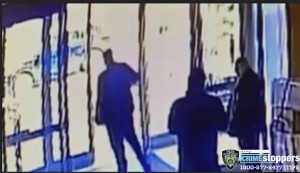 This image taken from surveillance video provided by the New York City Police Department shows an apartment building employee, center, closing the building’s front door after a man assaulted a 65-year-old Asian American woman, Monday afternoon, March 29, 2021, a few blocks from New York’s Times Square. The property developer and manager of the building wrote on Instagram that it was aware of the assault and said staff members who witnessed it were suspended pending an investigation.(Courtesy of New York Police Department via AP)

The building’s management company said Tuesday the doormen failed to follow required emergency and safety protocols during the March 29 attack near Times Square.

The doormen’s union, SEIU 32BJ, confirmed that they had been fired but declined to comment further.

The union previously said they waited until the attacker walked away to check on Kari and flag down a nearby patrol car because they thought he had a knife.

Padres Pedal the Cause joins forces to provide Groceries 4 Good

Critter Encounters is providing up close animal presentations to the community

A financial consultant's tips on a successful tax season

A financial consultant's tips on a successful tax season