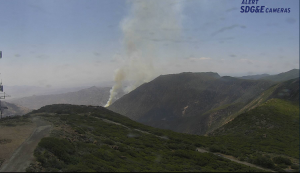 The Overland Fire in the community of Canebrake.

No structures had been threatened as 500 acres were reached by 1:20 p.m., according to Cal Fire San Diego.

.@CALFIRESANGIEGO is at scene of a vegetation fire in the community of Canebrake. The fire is 10 acres with a slow rate of spread. The remote location is making access by ground difficult. Ground and Air resources assigned.#OverlandFire pic.twitter.com/ZAYg4UCUpY

The fire was a half-mile west of County Highway S2.

“Air attack advising it will be an extended attack fire due to inaccessibility issues,” the agency said.