SAN DIEGO (KUSI) – The story of Navy SEAL Chief Eddie Gallagher grabbed national headlines after he was charged with war crimes in the death of an ISIS fighter in Iraq.

Ultimately, Chief Gallagher was found innocent of murder and the real fallout from the trials surrounded a corrupt investigation, including the dismissal of the lead prosecutor in the case.

Gallagher never testified at his trial, but has now told his side of the story in great detail through their new book entitled, “The Man in the Arena.” 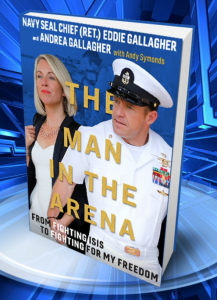 The retired Navy SEAL Chief explained that he wrote the book to tell his side of the story, which was not mentioned during the trial or in the media, he said.

“But the main reason I wrote it is to really highlight what heroes my wife and my brother were during this whole ordeal and just the extent that they went to to get the truth out there and get me out of prison,” Eddie said.

Jeffries followed the Gallghers’ case closely, prompting the couple to mention her in their book as the only person in the media who had reported his case fairly.

Now that the book is published, the couple told Jeffries that they’re focusing on The Pipe Hitter Foundation, which is dedicated to supporting service members, police, and first responders.