SAN DIEGO (KUSI) – The downtown San Diego building that houses the San Diego Union-Tribune and an office of Sen. Kamala Harris, D-Calif., was evacuated Wednesday for about an hour after a cluster of suspicious packages was found on top of a patio table near a corner of the building.

Officers responded to 600 B Street about 8:15 a.m. and ordered the evacuations of the 24-floor building as well as several businesses in the area, San Diego police public-affairs Officer Billy Hernandez said. Police also closed Sixth Avenue between A and B streets to traffic during the evacuations.

About an hour later, police determined the boxes were filled with everyday items.

Officers scanned the boxes and determined they were filled with various items including shoes, children’s books, a football and bags of potato chips, Lt. Kevin Wadhams said.

The boxes, which were on top of a patio table next to an orange air pump, were not addressed to anyone in particular, Wadhams said.

Surveillance video showed a person dropping off the boxes around 1:45 a.m., but officers were unable to identify the person from video, Wadhams said.

The buildings nearby the location were evacuated “out of an abundance of caution,” Wadhams said.

Augie Lopez, 27, who works at the front desk of the building as a security guard said it was the first time the building has been evacuated in the three years he has worked there.

The evacuations in downtown San Diego came on the same morning several suspicious packages were discovered across the country.

The fact that Harris — an outspoken Democratic critic of President Donald Trump — has an office in the San Diego building raised concerns that the suspicious packages might be linked to the other cases.

“Our office was evacuated today after suspicious packages were found near the building,” Harris spokeswoman Lily Adams said on Twitter. “The packages were not addressed to the senator or our office. We are grateful to the San Diego Police Department for their work to swiftly investigate this issue.”

SDPD Lieutenant Kevin Wadhams updates us on the evacuation of the WeWork building in downtown San Diego.Details: http://bit.ly/2PPawZH

SDPD Lieutenant Kevin Wadhams updated us on the evacuation of the WeWork building in downtown San Diego. He said the building was evacuated and the streets shut down out of an abundance of caution. The boxes were filled with children’s books, a football, a shoe, and an empty bag of potato chips. 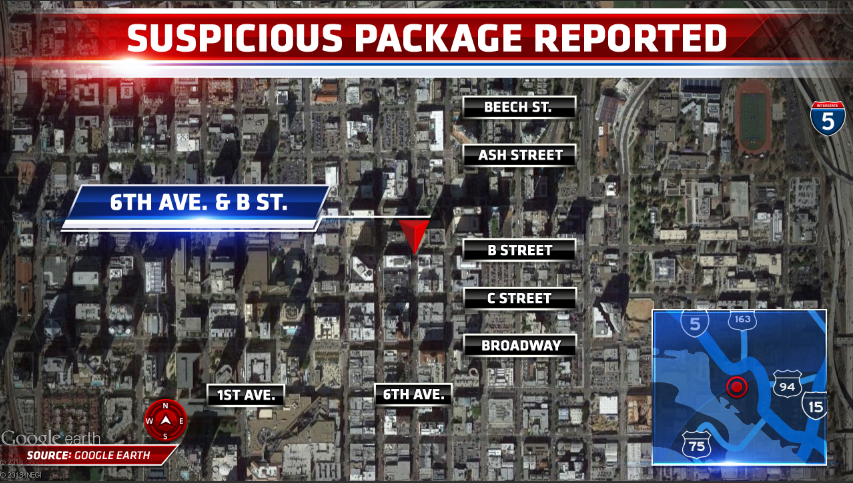 Suspicious package outside the @sdut building this morning. #journalism pic.twitter.com/KV7ovOEW5f