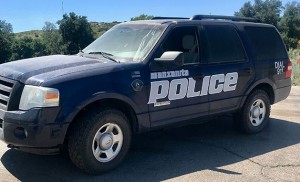 In his plea agreement, Anthony Reyes Vazquez admitted that the money should have gone to the tribe instead. Image source: The Manzanita Tribal Police Department’s website

SAN DIEGO (KUSI) – A former chief of the Manzanita Tribal Police Department pleaded guilty Monday to stealing more than $300,000 from the Manzanita Band of the Kumeyaay Nation as part of a scheme to sell police department membership to dozens of unqualified individuals.

Anthony Reyes Vazquez, 49, of Camarillo, served as the department’s chief from 2012 to 2018, during which time federal prosecutors say he sold fake badges to people seeking to become members of the department and have attendant law enforcement privileges, such as carrying concealed weapons.

Despite those individuals having little to no law enforcement experience, the U.S. Attorney’s Office said they paid from $5,000 to $100,000 to join the department.

Those recruited people — known as the “VIP Group” — were not expected to perform any law enforcement services and many had never visited the Manzanita Band reservation, according to the U.S. Attorney’s Office.

According to its website, the department enforces tribal ordinances and applicable federal laws on the Manzanita Reservation in the southern Laguna Mountains near Boulevard.

The U.S. Attorney’s Office said the department was not recognized by the state of California or the Bureau of Indian Affairs as a police department and didn’t have authority to enforce state or federal laws.

Donations from the VIP Group to Reyes Vazquez totaled around $300,000, which he admitted in his plea agreement should have gone to the tribe instead, the U.S. Attorney’s Office said.

Prosecutors also say Reyes Vazquez paid cash kickbacks and commissions to recruiters, in addition to paying himself around $2,000 per month as reimbursement for travel expenses from his home to the reservation.

Reyes Vazquez’s plea agreement included admissions that he had a 1992 felony drug conviction and illegally possessed around two dozen firearms while serving as the tribal police chief.

FBI Special Agent in Charge Suzanne Turner said, “This brazen scheme not only deprived the Manzanita Band of funding, but also caused numerous untrained ‘officers’ to believe they were authorized to carry concealed weapons on and off the reservation and enforce laws with little to no training.”