The letter of recommendation was written for Susumo Azano Jr., the son of Jose Susumo Azano Matsura, a millionaire foreign national who prosecutors believe illegally funneled more than $500,000 into local political campaigns, including Dumanis’ failed mayoral run. He is now facing federal charges.

The letter was written September 28, 2012 to Mary E. Lyons, President of the University of San Diego, in support of Azano Jr.’s admission application to the school. In the letter, Dumanis calls Azano Jr., “a bright, energetic, compassionate and genuinely well-rounded young man.” In Wednesday’s live interview on Good Morning San Diego, Dumanis admitted she has never met Azano Jr. She says long-time friend, retired San Diego police detective Ernie Encinas, asked her to write the letter. She says it is common practice to write letters of recommendation for people she has never met at the request of those whose judgment she trusts. Encinas pleaded guilty in March to conspiracy to commit crimes against the United States and filing a false tax return in connection to his involvement with the campaign finance dealing of the elder Azano.

Word of this letter of recommendation first spread the weekend before Dumanis was elected to her fourth term as District Attorney. Her opponent, Bob Brewer, went to court to seek the release of the letter which was part of the file in the case against Azano. The judge denied the request.

Local media outlets have been pressuring Dumanis to release the letter herself. KUSI-TV was approached to join the others, but refused to engage in the attempt at legal action believing the letter was protected speech and part of a federal investigation. 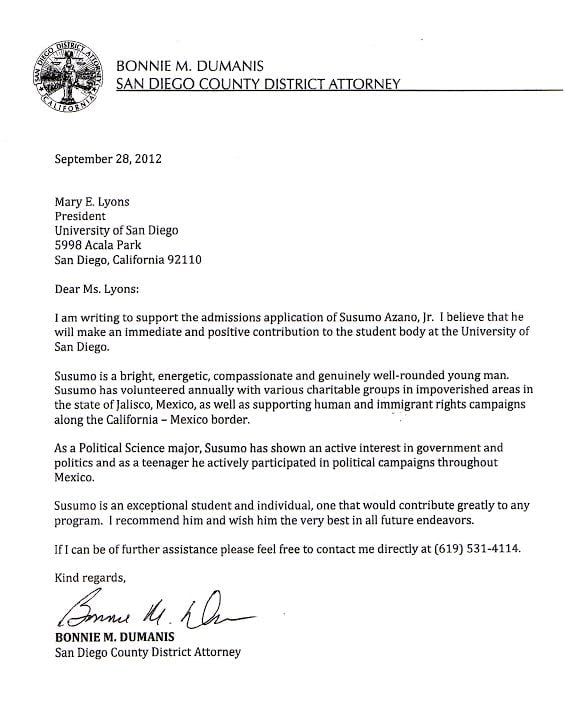