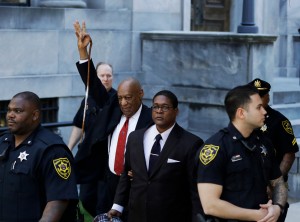 FILE – Bill Cosby gestures as he leaves the Montgomery County Courthouse on April 26, 2018, in Norristown, Pa., after he was convicted of drugging and molesting a woman in the first big celebrity trial of the #MeToo era. Pennsylvania’s highest court has overturned comedian Cosby’s sex assault conviction. The court said Wednesday, June 30, 2021, that they found an agreement with a previous prosecutor prevented him from being charged in the case. (AP Photo/Matt Slocum, File)

PHILADELPHIA (AP) — Bill Cosby’s sexual assault conviction has been thrown out by Pennsylvania’s highest court, which ruled that he was unfairly prosecuted because a previous district attorney had promised he wouldn’t be charged.

The justices found that Cosby relied on that promise when he agreed to testify without invoking his Fifth Amendment right against self-incrimination in a lawsuit brought against him by Temple University employee Andrea Constand.

The ruling is extremely rare.

One law professor who has followed Cosby’s case closely over the years says he has never heard of a high court in Pennsylvania or anywhere else grappling with a prosecutor’s informal promise not to prosecute.