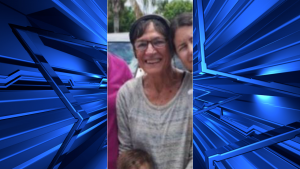 Roy suffers from dementia and has been known to walk away from her home before, Seiver said.

The sheriff’s search and rescue volunteers conducted an all-day search of the Santa Margarita riverbed Saturday on foot, using off-road vehicles, dogs and drones, he said. They searched a shallow pond and a river in the area but could not locate Roy.

She is white, 5 feet, 4 inches tall and weighs about 120 pounds. She has graying dark hair and wears glasses, according to deputies.

Cataldo told Village News that Roy, who prefers to go by her maiden name Lorea, has had “incrementally increasing dementia” over the past four or five years.

“The only thing that matters to me is that she shows up, period,” Cataldo told Village News.

World of Wonder: The 1964 Alaskan earthquake

Santee Lakes is open and now stocked with 2,500 lbs of trout and catfish!

Update on the Republic Services Sanitation strike one month later