SAN DIEGO (KUSI) – A letter was sent Tuesday to all the passengers by Celebrity Cruises instructed them to self-quarantine for 14 days.

“Celebrity Cruises has recently been advised that a person who sailed on Celebrity Eclipse from March 1st through 30th has recently tested positive for COVID-19. Because you were a passenger on the same voyage, it is possible you were exposed to someone who was sick with COVID-19,” the letter reads.

Passengers were advised to take their temperature twice daily and monitor for symptoms such as fever, coughing and shortness of breath.

County health officials said Monday that no patient aboard the ship had been diagnosed with the illness, and Celebrity Cruises appeared to confirm that earlier Tuesday morning before the diagnosis was announced.

“We received clearance from port authorities and public health officials to disembark our guests and return them safely to their homes. No guests or crew members reported with symptoms throughout the sailing, and guests are going through exit health screenings when they leave the ship. We remain in continuous contact with public health authorities and appreciate their guidance to protect the well-being of our guests and crew,” the cruise line statement read.

Dr. Eric McDonald, the county’s medical director of epidemiology, said Monday the health of the ship’s occupants was excellent. County health officials were in continuous contact with the ship’s crew for any sign of symptoms, he said.

The cruise ship, which began disembarking more than 2,300 passengers Monday, was the last one allowed to disembark in San Diego after a county health order prohibiting any disembarkations after Tuesday. County officials said the remaining passengers will disembark Tuesday after health screenings.

KUSI News obtained a copy of the exact email from Celebrity Cruises: 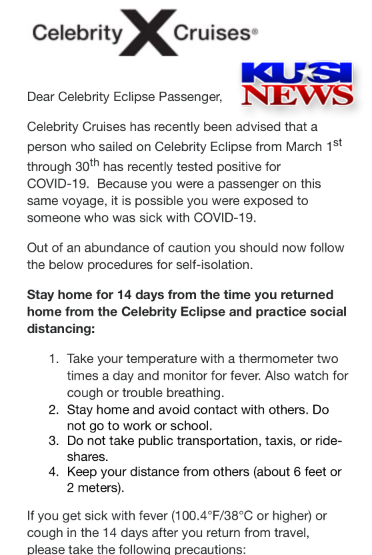 As I first reported, Celebrity Cruises now acknowledges a positive #COVID19 case on board. AFTER they released more than 2000 passengers yesterday. @KUSINews pic.twitter.com/dCI3WsO7eA

SAN DIEGO (KUSI) – KUSI has learned that at least one of the passengers on a cruise ship that docked in San Diego today is in intensive care tonight. Her family says the hospital confirms, she tested positive with Coronavirus.

The woman in her 60’s was aboard the Celebrity Eclipse cruise ship that disembarked in San Diego this morning. Everyone on board was healthy and showing no symptoms, officials said.

However, the woman has been sick for nearly a week. The cruise started in December and was supposed to last around 4 months.

About 5 days ago, the woman developed a fever and was diagnosed with possible bronchitis. She was not quarantined and sent back to her state room.

Two days later she developed pneumonia, was put on an IV and had difficulty breathing. Today hospital officials confirm to the family she has COVID-19 positive.

KUSI reached out to the county for reaction, and they referred us to Health and Human Services. Officials there told us they were unaware of a COVID-19 case on board the ship.

As far as the other passengers allowed to leave, they were instructed to self-quarantine after being screened on the ship.