SAN DIEGO (KUSI) – The family of a young girl who was wounded in the 2019 hate crime shooting at the Chabad of Poway has filed a lawsuit alleging insufficient security measures were in place at the synagogue when a gunman opened fire on the last day of Passover, killing a woman and injuring three others. 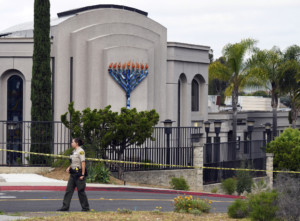 FILE – In this Sunday, April 28, 2019 file photo, a San Diego county sheriff’s deputy stands in front of the Poway Chabad Synagogue in Poway, Calif. The gunman who attacked the synagogue last week fired his semi-automatic rifle at Passover worshippers after walking through the front entrance that synagogue leaders identified last year as needing improved security. The synagogue applied for a federal grant to better protect that area. The money, $150,000, was approved in September but only arrived in late March. “Obviously we did not have a chance to start using the funds yet,” Rabbi Scimcha Backman told The Associated Press. (AP Photo/Denis Poroy, File)

The suit filed last week in San Diego Superior Court alleges security guards should have been hired to safeguard the congregation at the time of the April 27, 2019, shooting and that the synagogue lacked enough fences, gates, barriers and other measures to keep threats out. The lawsuit also alleges the Chabad received federal funds intended to be spent on security upgrades in anticipation that the synagogue would likely be a target of antisemitic attacks, yet the money was not spent.

Plaintiffs include Israel Dahan, the father of Noya Dahan, who was 8 at the time of the shooting and was wounded along with her uncle, Almog Peretz, and the Chabad’s former rabbi Yisroel Goldstein. Killed in the shooting was 60-year-old Lori Gilbert Kaye, who was shot twice in the synagogue’s foyer.

Other plaintiffs include minors identified only as N.D., L.D. 1 and L.D. 2.

Defendants include the Chabad of Poway, the Chabad of California, Rabbi Simcha Backman — who oversees security grants for all 207 Chabad organizations across the state — and the alleged shooter, 21-year-old John Timothy Earnest.

Representatives with the Chabads and Backman did not immediately respond for comment regarding the lawsuit.

According to the complaint, the Chabad of Poway applied to a federal grant program in May 2018 to secure funding for security upgrades “because it believed it was at risk of an antisemitic or terrorist attack on its congregants.” The synagogue received an initial portion of grant funding in March 2019, but was made aware about six months earlier that the funding was granted, according to the complaint.

Backman told The Associated Press in 2019, “Obviously, we did not have a chance to start using the funds yet.”

The complaint alleges that despite the delay in receiving the funds, the synagogue could have begun incurring expenses for security measures, then -used the grant funds as reimbursement.

“The delay in receiving federal funds does not excuse Chabad of Poway from its deficient security and for not taking target-hardening measures in advance of the date of the shooting,” the complaint states. It also alleges the Chabad had other sources of funds that could have been used to hire security guards.

“Regardless of whether or not Chabad of Poway received federal safety grant funds, Chabad of Poway is responsible for providing a safe and secure premises for its congregants, including Plaintiffs and it failed to do so,” the complaint states.

Meanwhile, Earnest remains in custody and could face the death penalty in the case filed by state prosecutors, which charges him with murder, attempted murder, arson and hate crime allegations. He also faces more than 100 federal counts in a separate prosecution regarding the shooting and could also face capital punishment in that case.

Earnest is also charged with allegedly setting fire to the Dar-ul-Arqam Mosque, also known as the Islamic Center of Escondido about a month prior to the shooting.