SKYLINE (KUSI) – Homicide detectives are still trying to piece together what led to a Thanksgiving tragedy in Skyline. Nearly a week since 12-year-old child Angel Domingo Gaspar Gallegos was fatally shot by stray bullet in his backyard, the family is no closer to understanding how and why this happened. Angel’s aunt, Maria Gaspar-Casillas, said the family is still trying to process the tragedy.

“You know, you try to keep them from harm’s way and your backyard is supposed to be the safest place,” Gaspar-Casillas said. “The community has been impacted beyond just our family, including anyone who has young ones, because it could have been anyone’s child.”

There were around 30 people gathered for Thanksgiving celebrations, with the night ending and most getting ready to leave. Angel was playing video games in the backyard patio portion of the home with dozens of cousins when they described hearing a loud bang.

“His brother comes running inside telling us his brother was bleeding. Of course, you don’t want to believe that,” Gaspar-Casillas said. “I rode with him to the hospital, I still remember every bump, turn — I can still feel him fighting to keep him with us.”

Despite first aid being rendered immediately, Angel died at a local hospital. Homicide investigators have provided little details about their findings over the course of week, but confirmed a single bullet struck Angel from the east, hitting him in the back. A vigil has grown outside the family’s home with the community encouraged to visit and provide comfort as they mourn a life taken too soon.

“He was just a kid who was loved by all who knew him, he was just an angel on earth, he was an angel who walked with us and we’re grateful we got him for 12 years,” Gaspar-Casillas said.

The family said as they begin to make funeral arrangements and come to terms with the tragedy, they are pleading with anyone who has information that could be helpful in the investigation to come forward.

“We just want someone to say something, we just want justice, we want to know why it happened, how it happened,” Gaspar-Casillas had this message for the person who may have fired that fatal shot. “Just come forward. Maybe you made a mistake, maybe it was a mistake or an accident. There’s no way this was done purposefully. He was a good kid; he wasn’t in gangs. He wasn’t a bad kid at all.”

“Thanksgiving is never going to be the same, but we’re going to continue celebrating Angel’s life. And his wings will continue to fly,” Gaspar-Casillas said.

A GoFundMe campaign has been set up to help support the family as they move forward.

KUSI’s Hunter Sowards was live from Skyline Tuesday night with the latest. 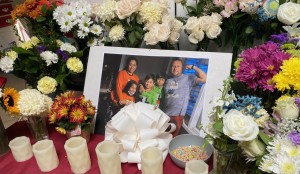 ‘We just want to know what happened’ This is where a stray bullet entered the backyard of a Skyline home fatally striking 12-year-old Angel Gallegos on Thanksgiving. Loved ones are pleading for anyone with information to come forward and help bring their family closure. pic.twitter.com/fbLm2bINgB