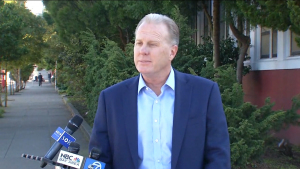 SAN DIEGO (KUSI) – Former San Diego Mayor Kevin Faulconer announced Monday his gubernatorial campaign is planning to file a lawsuit against the Secretary of State’s Office regarding his ballot designation in the recall election.

In a statement issued Monday, Faulconer’s campaign announced it would take legal action regarding his desired ballot designation as “retired San Diego Mayor.”

The Secretary of State’s office did not immediately respond to a request for comment.

“It defies common sense that Kevin Faulconer wouldn’t be allowed to use “retired San Diego Mayor” as his ballot designation, where he was elected and re-elected, leaving office only at the end of last year, campaign spokesman John Burke said.

“This is not fair to voters who should be given accurate information as to who the candidates for this recall actually are. Our campaign is suing the Secretary of State to ensure that this is rectified.”

Faulconer, a Republican, is one of dozens of candidates seeking to replace Gov. Gavin Newsom if voters choose to recall him in the Sept. 14 election.