NEW YORK (AP) — The apparent suicide of Jeffrey Epstein has brought new scrutiny to a federal jail in New York that, despite chronic understaffing, houses some of the highest-security inmates in the country.

Epstein’s death is also the latest black eye for the U.S. Bureau of Prisons, the jail’s parent agency that already was under fire for the October death of Boston gangster James “Whitey” Bulger, who was fatally beaten at a federal prison in West Virginia shortly after his arrival.

Taken together, the deaths underscore “serious issues surrounding a lack of leadership” within the BOP, said Cameron Lindsay, a former warden who ran three federal lockups, including the Metropolitan Detention Center in Brooklyn.

The Bureau of Prisons did not respond to repeated requests for details about Epstein’s death. But Attorney General William Barr demanded answers, saying he was appalled by the apparent suicide and announcing a pair of federal inquiries by the FBI and the Justice Department’s inspector general.

Attorney General William Barr said Monday the Justice Department has already found “serious irregularities” at the Manhattan jail where Epstein was being held, adding that the facility “failed to adequately secure this prisoner.” 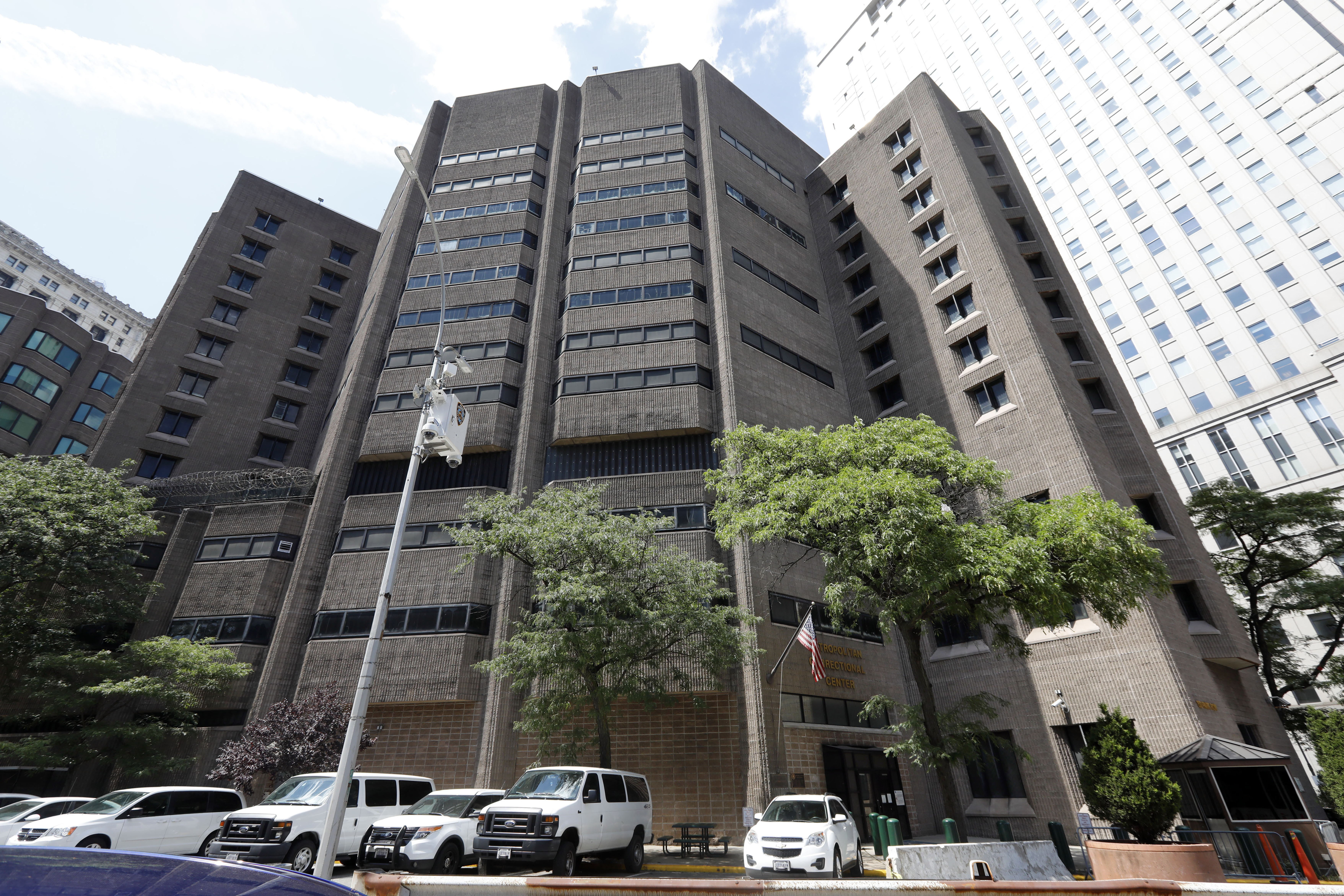 This July 1, 2019 photo shows the Manhattan Correctional Center, in New York. Financier Jeffrey Epstein died by suicide while awaiting trial on sex-trafficking charges in New York, a former law enforcement official said Saturday. He was found in his cell at the Manhattan Correctional Center Saturday morning, according to the officials, who was briefed on the matter but spoke on condition of anonymity because he wasn’t authorized to discuss it publicly. The medical examiner’s office in Manhattan confirmed Epstein’s death. (AP Photo/Richard Drew)

Barr also issued a stern warning, saying the case was far from over and that anyone who may have conspired with Epstein “should not rest easy.”

Epstein, 66, had pleaded not guilty to federal sex trafficking and conspiracy charges. His lawyers maintained the charges against him violated a non-prosecution agreement he signed over a decade ago.

Epstein’s death brings fresh attention to the staffing at Manhattan’s Metropolitan Correctional Center, where shortages worsened by a partial government shutdown prompted inmates to stage a hunger strike in January after they were denied family and lawyer visits.

Eight months later, the lockup remains so short-staffed that the BOP is offering correctional officers a $10,000 bonus to transfer there from other federal lockups. That’s on top of a so-called “recruitment incentive” that amounts to 10% of new guards’ first-year salaries.

Staffing shortfalls are resulting in extreme overtime shifts, in which guards may work up to 16 hours a day. A person familiar with the jail’s operations told The Associated Press that a guard in Epstein’s unit was working a fifth straight day of overtime and another guard was working mandatory overtime the day he was found.

The person spoke on condition of anonymity because he lacked authorization to publicly discuss jail operations.

Those conditions could make it more difficult for correctional officers to enforce the BOP’s strict measures for screening security risks. Those protocols acknowledge that inmates held in so-called special housing units, as Epstein was, “may be at a higher risk for suicidal behavior.”

Those safeguards — including cell checks every 30 minutes — were not followed the night before Epstein’s death, The New York Times reported Sunday, citing a law enforcement official familiar with the investigation.

Epstein had been alone in his cell when he was found unresponsive Saturday, even though he only recently had returned to the Special Housing Unit from suicide watch, the person familiar with the jail’s operations said. The jail had placed him on 24-hour monitoring — with daily psychiatric evaluations — after he was found injured on the floor of his cell two weeks ago with neck bruises.

Catherine Linaweaver, who retired in 2014 after 16 months as the MCC’s warden, said some people were overreacting to Epstein’s suicide because he was well known. She noted the limitations jailers face when someone decides to take his or her own life.

“If someone really wants to commit suicide,” Linaweaver said, “they’re going to do it.”

For more than a decade, the union that represents federal correctional officers has been warning of what it describes as “unsound” and “dangerous” staffing levels at prisons around the country. In general population units, there’s often just one officer to deal with more than 125 inmates.

Eric Williams, a correctional officer at a federal penitentiary in Canaan, Pennsylvania, was working alone on a bi-level unit in February 2013 when inmate Jessie Con-ui hurled him down a concrete staircase and stabbed him repeatedly with a makeshift blade, killing him.

The attack came so suddenly and with such force, Williams never had a chance to call for help. No one at the prison thought to look for Williams until an officer noticed he had not returned at the end of his shift.

The MCC’s sister federal lockup — the Metropolitan Detention Center in Brooklyn, which houses more than 1,600 inmates — has had its own troubles in recent years.

In February, the Justice Department asked the Office of Inspector General to review whether the Bureau of Prisons responded appropriately to a weeklong power outage at the facility that left inmates shivering and led defense lawyers to sue over what they described as a “humanitarian crisis.”

“What I see is a continued deterioration of leadership in the BOP,” said Jack Donson, a retired correctional treatment specialist who worked for the agency for more than two decades.

Epstein’s death is hardly the first scandal at the Metropolitan Correctional Center, which last year saw a prison guard plead guilty to taking more than $25,000 in cash bribes to smuggle cellphones, alcohol and food to a wealthy Turkish gold trader. The guard, Victor Casado , was sentenced in January to three years in prison by a judge who called the crime an assault on “our entire system of justice.”

The 12-story jail had been designed to house 449 inmates when it opened in 1975 near the Brooklyn Bridge. Its population ballooned within two years to 539 inmates, prompting a judge to declare it “unacceptably cramped and oppressive for most healthy inmates.”

Authorities tightened security after a guard was seriously injured in 2000 by a terrorist convicted in the deadly 1998 embassy bombings in Kenya and Tanzania.

Ron Kuby, who once represented a blind Egyptian sheik sentenced to life in prison after a 1990s Manhattan terrorism trial, said the lockup houses some of “the highest-security prisoners on earth.”

He said that while suicide attempts among inmates are commonplace, “it’s been a long time since they lost somebody.”

“The overall quality of staffing tends to be better than your average county jail in Bumbleberg,” he said.