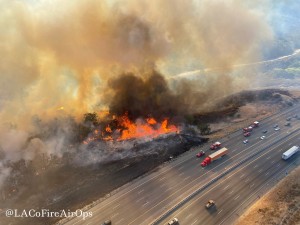 CASTAIC, Calif. (AP) — Authorities have reopened nearly all lanes of a major Southern California highway as firefighters made progress on a wildfire that jumped across the road.

The fire erupted Saturday on a dry hillside near Castaic in northern Los Angeles County and grew to more than half a square mile, prompting highway authorities to temporarily shut a stretch of Interstate 5.

The fire remains uncontained due to the mountainous terrain, but officials say firefighters are making progress with the help of water-dropping aircraft and an aggressive ground attack.

Near Lake Tahoe, more evacuation orders are being lifted as firefighters gain the upper hand on the huge Caldor Fire.