Firefighters bracing for fires that could resemble 2007 fire event 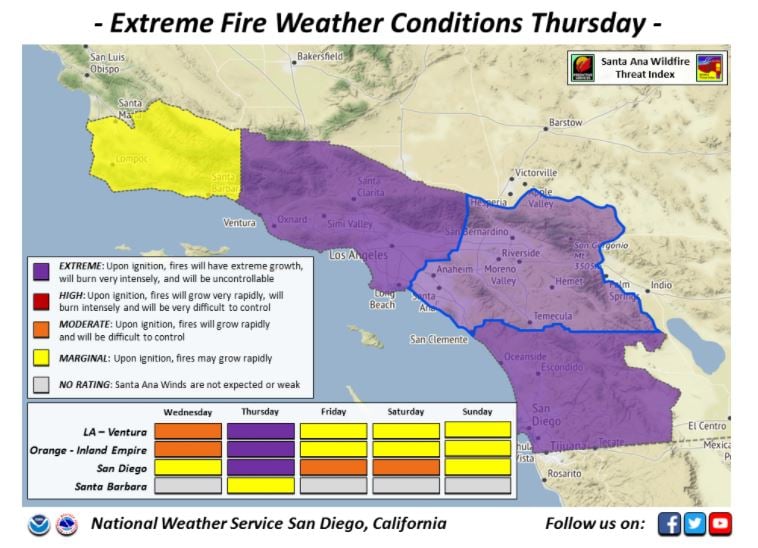 Additionally, the federal agency lengthened an accompanying high-wind warning for the county’s valleys and mountains by 24 hours, moving back its scheduled expiration to 4 p.m. Friday.

The most critical fire hazards likely will occur Thursday and Friday, forecasters said.

On the upside, mild temperatures are expected to help mitigate the fire danger somewhat, though significant risk will remain due to the strong winds and humidity levels in the 5- to 15-percent range, the NWS advised.

To prepare for the dicey conditions, both the San Diego Fire-Rescue Department and San Diego Gas & Electric beefed up staffing levels this week.

"Meteorologists at the National Weather Service have not seen models for a Santa Ana event like this in many years,” San Diego Fire Chief Brian Fennessy said. "We are being vigilant in up-staffing to protect San Diegans and their property. We ask that residents practice their evacuation plans and be prepared in case of a wildfire.”

SDG&E — which last week lost a ruling in relation to the 2007 wildfires the company was found responsible for starting — said it may need to turn off power this week in certain areas "if weather conditions threaten the integrity of our system and create the possibility of an imminent emergency.”

Several years of drought coupled with heavy rains last winter have led to significant fire fuel in the form of underbrush and grass, and a lack of recent rainfall coupled with frequent low humidity have dried out the extra fuel, making it ready to burn freely, according to firefighting officials.

The San Diego Fire-Rescue Department also increased their staffing this week as a result of the threat level.

“Meteorologists at the National Weather Service have not seen models for a Santa Ana event like this in many years,” said Fire Chief Brian Fennessy. “We are being vigilant in upstaffing to protect San Diegans and their property. We ask that residents practice their evacuation plans and be prepared in case of a wildfire.”

SDFD upstaffing means an increase in the number of personnel as well as apparatus available for fire suppression efforts. Here is a summary of upstaffing levels for next week. Please keep in mind that these apparatus and personnel are in addition to the daily staffing requirements.

An additional Strike Team (brush rigs) will be added because of elevated fire threat conditions in our area. This Strike Team matches the configuration of the previously mentioned team and will be available for any incident within the limits of the County of San Diego. Brush rigs are large off-road capable fire apparatus which carry between 600 and 1500 gallons of water. Water tenders carry 3000 gallons of water and provide water supply to engines at vegetation fires.

Additional apparatus for SDFD Air Operations are a fixed-wing air tactical plane and pilot. The pilot acts as the coordinator of the air and ground attack on a fire incident. General Atomics is also prepared to respond to our city or a regional emergency incident with their intelligence, surveillance and reconnaissance (ISR) fixed-wing aircraft. This aircraft collects a variety of information including photos and video. This information can be used in strategic fire suppression efforts.

SDFD is prepared and reminds San Diegans to be prepared as well. Practicing an evacuation plan in advance of an emergency can mean the difference between injury and death. Often, wildland fire-related deaths occur because people wait too long to leave their homes.