WASHINGTON (AP) — Melania Trump is marking the 100th anniversary of women gaining the right to vote with an art exhibit based on works by children from all 50 states and the District of Columbia.

The first lady called adoption of the 19th Amendment to the Constitution that granted women voting rights a “turning point” in the women’s rights movement.

In remarks prepared for Monday’s unveiling in front of the White House, she said the exhibit would encourage parents to talk to their children about the “important conversations taking place around equality” and help them understand the history behind women’s suffrage.

Mrs. Trump was also using her appearance — on the opening day of the Republican National Convention — to promote certain aspects of her husband’s record on women’s issues. Polls show President Donald Trump facing a yawning deficit with female voters.

In the remarks, the first lady says under “our administration” the child tax credit was doubled, women experienced some of the lowest rates of unemployment on record and the Republican president put women in many senior administration positions.

One of those women, White House counselor Kellyanne Conway, who is one of the president’s longest-serving aides, announced late Sunday that she is leaving at the end of August to spend more time with her four children. Conway was Trump’s third campaign manager and made history in 2016 as the first woman to steer a winning presidential campaign.

Joining Mrs. Trump for the launch of the “Building the Movement: America’s Youth Celebrate 100 Years of Women’s Suffrage” exhibit will be some of the young artists, female administration officials, Cabinet secretaries and state and local elected officials.

Historic photographs depicting women’s suffrage will be included in the exhibit.

“It is these women and their brave actions that have provided strength and inspiration to so many mothers, daughters, and sisters who have stamped their own mark on our country, ensuring future generations of women have the ability to pursue their dreams,” the first lady says in the prepared text obtained by The Associated Press.

She was with the president last week as he signed a proclamation marking the centennial.

Mrs. Trump announced the art project in June with a call for entries from students around the country. More than 450 submissions flooded in. The first lady, the Women’s Suffrage Centennial Commission and the White House curator’s office chose the winners.

The full exhibit will be available online. 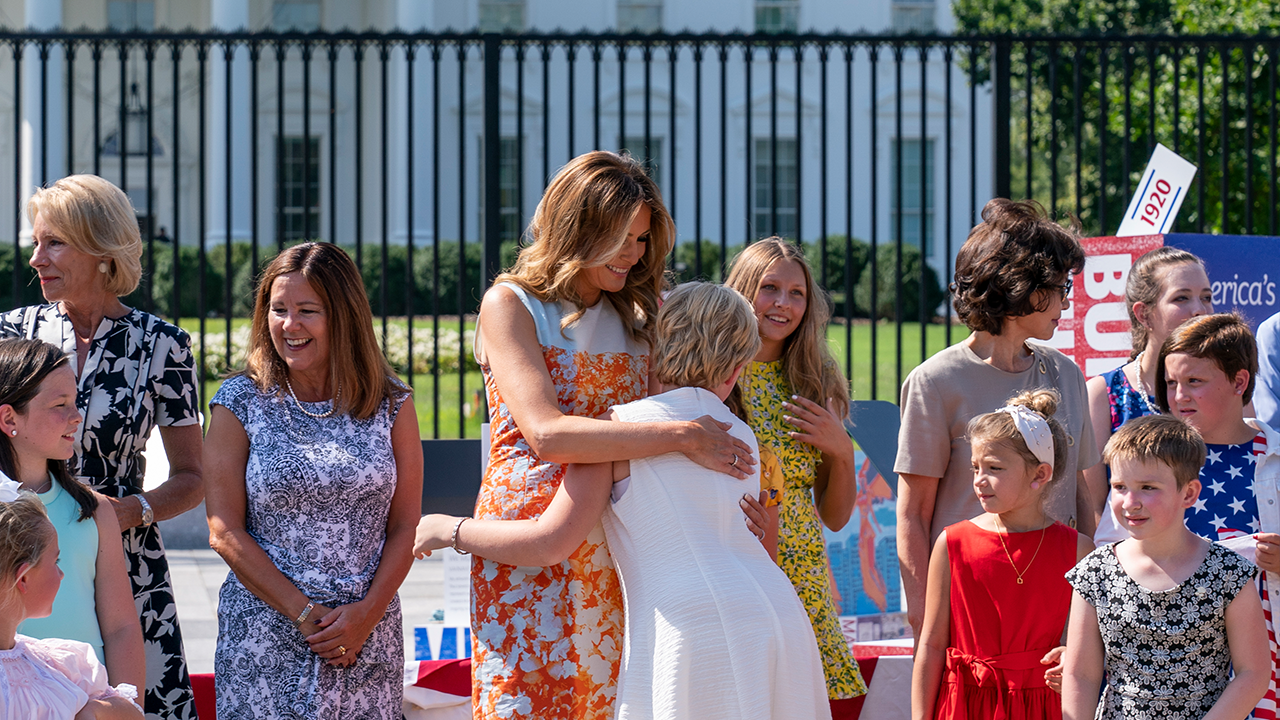 First Lady Melania Trump is hugged by Joy Barnard, a young artist from Michigan, as she visits an exhibit of artwork in celebration of the 100th anniversary of the 19th amendment which afforded the vote to women, at the White House in Washington, Monday, Aug. 24, 2020. She is joined by, from left, Education Secretary Betsy Devos, Second Lady Karen Pence, and Transportation Secretary Elaine Chao.(AP Photo/J. Scott Applewhite)