UPDATE: The district and the City Parks & Recreation department came to an agreement on Thursday, February 11, to allow some pools to re-open starting February 16. Morley Field, which hosts cross country meets, will also open.

Kristin Copeland’s daughter was a Patrick Henry sophomore, ready for a big spring swim season. Then a virus washed away the schedule.

“Last year, after one meet, everything shut down,” Copeland said.

On January 25th, the lift of the stay-at-home order gave a lift to the swimming community – a “purple tier,” low contact sport, would be eligible to start team practice February 1st, and competition as early as the sixth.

Instead, for Patrick Henry and eight other San Diego Unified School District programs, they’ve been waiting and waiting. Not for a delay of safety, but a delay of facilities.

Negotiations between SDUSD and the City of San Diego’s Parks and Rec department have gone on since December, only breaking through recently as complaints and correspondence with parents and students have piled up. Only three of the 13 city pools are currently open, and all three are for recreational swimming only.

“I assumed they’d have to give them access to a pool,” Tara Winter, who has a child in the Patriots program, said. “How could they possibly start a sport like swimming and not give them a place to swim?” 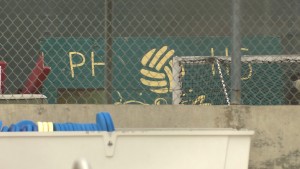 Patrick Henry equipment sits, unused, inside the Allied Gardens pool. While water polo is not cleared to start, the swim team waits to start.

“As soon as CIF issued start dates, then the city was more receptive,” Director of Athletics Scott Giusti said. “When the pools were no longer open, they moved different personnel to other locations. Getting lifeguards, those kind of steps and priorities of the city…they have to take precedent for what they need.”

The city is aiming to re-open the five pools Giusti says are necessary by February 16, but opening the pools now doesn’t change the fact that these teams are behind other schools by two weeks.

“To see the look on my daughter’s face when they got the email…that her high school season could end? Really hard…and frustrating,” Copeland said.

“Finally this year when they get that glimmer of hope…it’s heart-wrenching.”

Not every city school has had to deal with the same circumstances. Schools like La Jolla have a pool on-site, and can rent time easily. Others, like University City, have rented private pools.

“We cannot get the hours to go up to [Coggan Pool],” Peterson said. “We don’t have the funding, and its definitely outside of a safe travel time.”

“I’d like to know why other schools under the mayor’s jurisdiction are somehow allowed to practice safely in the water,” Winter said. “What’s the difference between their pool and this pool? It’s an unfair distribution of the policy.”

"I assumed they'd have to give them access to a pool," Tara Winter, who has a child in the Patriots program, said. "How could they possibly start a sport like swimming and not give them a place to swim?" pic.twitter.com/gSLIOV8jOW