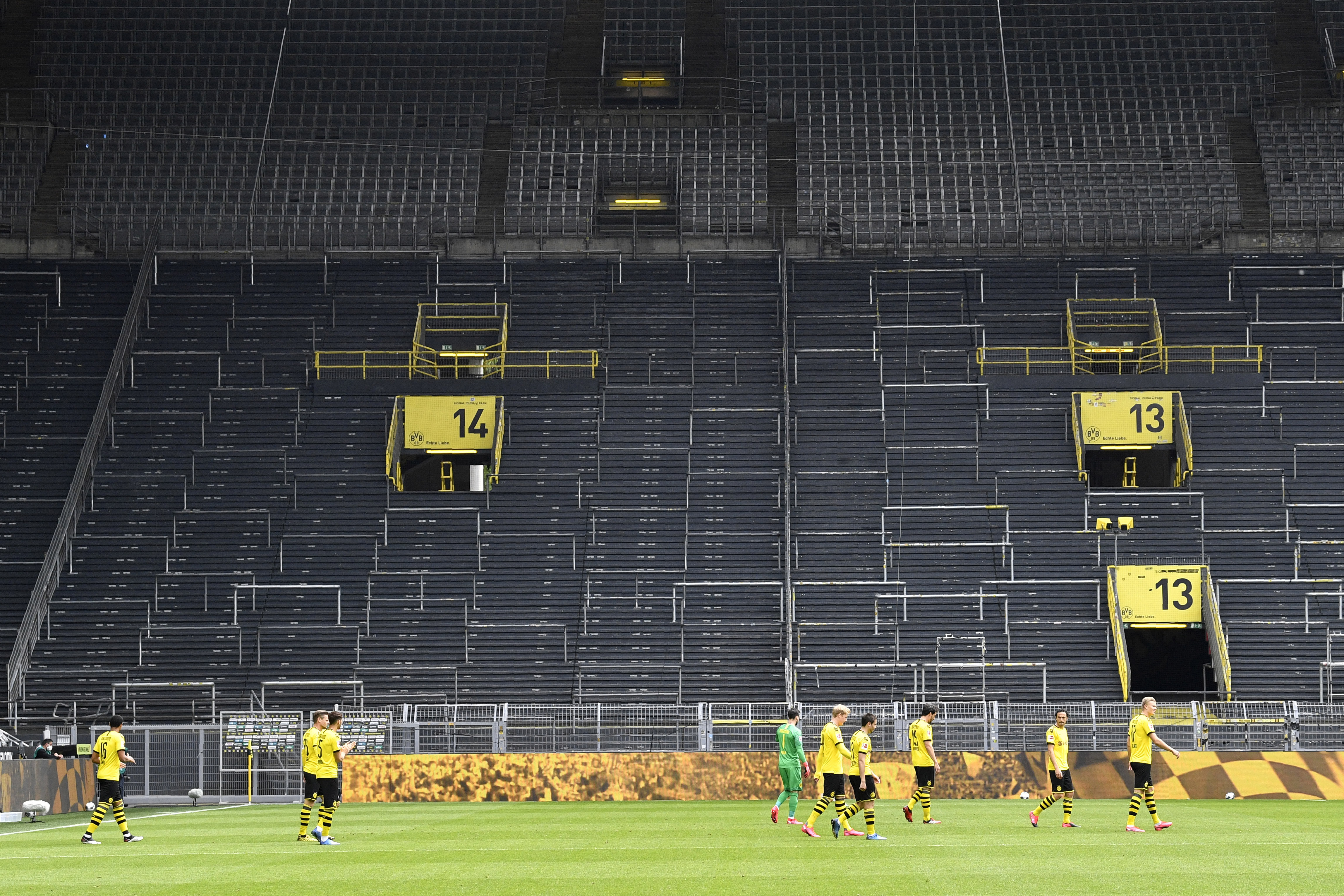 Dortmund players enter the pitch for the German Bundesliga soccer match between Borussia Dortmund and Schalke 04 in Dortmund, Germany, Saturday, May 16, 2020. The German Bundesliga becomes the world’s first major soccer league to resume after a two-month suspension because of the coronavirus pandemic. (AP Photo/Martin Meissner, Pool)

The Ruhr derby between Borussia Dortmund and Schalke kicked off in an empty stadium as all games began amid strict hygiene measures. Calls and shouts from coaching staff and players, and the thud of the ball being kicked, reverberated around the mainly deserted stands.

Team staff, and players who didn’t start, wore masks. Substitutes took their positions in the stands, rather than beside the fields as customary, while balls and seats were disinfected.

“It’s quite surreal,” Dortmund chief executive Hans Joachim Watzke told Sky TV. “I’ve received messages from all over the world in the last couple of hours that everybody is watching and then you go through the city and there’s nothing going on.”

The Ruhr derby was one of five games that were the first to be played in the league since March 11.

South Korea midfielder Lee Jae-sung scored the first goal in the division for Holstein Kiel in a 2-2 draw at Jahn Regensburg. He celebrated by giving teammates fist bumps.

Goal celebrations in other games were also marked by fist bumps and elbow-to-elbow touching. Players had been warned to keep their emotions in check, and to desist from spitting, handshakes and hugging.

The game’s authorities were keen to restart the country’s top two divisions with several clubs, including Schalke, facing severe financial difficulties because of the suspension in play.

Numerous polls showed a growing majority in Germany were against the resumption of the leagues. Fans are also critical of games without supporters present.

“Soccer without fans is nothing,” read a joint statement from several Bayern Munich fan groups after the league decided on May 7 to resume.

Cologne fans accused authorities Saturday of prioritizing money over people’s health. A banner at Augsburg’s game against Wolfsburg said, “Soccer will survive, your business is sick!”.

There was criticism too from players.

Karlsruher SC midfielder Marc Lorenz, a substitute in the second division game against Darmstadt on Saturday, told the Badische Neueste Nachrichten newspaper that the league hadn’t considered the health of the players “at all” in its rush to get back. He also warned of fatigue leading to serious injuries.

Teams in both divisions are allowed five substitutions instead of the usual three to help cope after two months without play.

Players and staff have been subjected to regular testing for COVID-19. There were three cases found at Cologne, while second-division Dynamo Dresden was ordered into 14 days of quarantine after two more cases brought its total to three last Saturday. Dresden’s game against Hannover on Sunday was called off, and the team cannot train during the quarantine period.

Augsburg coach Heiko Herrlich was due to make his debut in charge against Wolfsburg but missed the game after leaving the team hotel in strict quarantine conditions to buy toiletries. He will only return after twice testing negative for the virus.