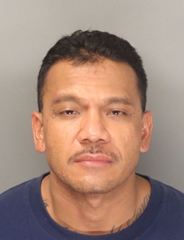 Christopher Marquez, 36, was one of three people in a stolen Honda Civic that patrol personnel spotted in a drive-thru at a Jack in the Box restaurant in the 700 block of Roosevelt Avenue in National City shortly after 2:30 a.m., according to police. 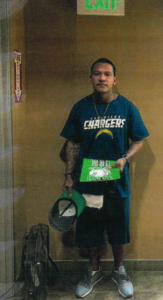 After locking down the restaurant and clearing people out of the adjacent parking lot, officers performed a traffic stop and began directing the occupants of the Honda to surrender for questioning, Lt. David Bavencoff said.

The driver and front-seat passenger complied, but Marquez, a parolee who had been riding in the back of the car, got out and ran off to the north, with two officers giving chase.

After bolting onto a nearby onramp from East Seventh Street to northbound I-5, the fleeing man allegedly turned and fired several shots in the direction of the officers, prompting them to return fire.

The suspect them ran onto the freeway and scrambled across the lanes to the west. It was unclear if he had been struck by the officers’ gunfire, Bavencoff said.

Police fanned out through the area but were unable to locate Marquez, who is the subject of arrest warrants for alleged auto theft, hit-and-run, evading arrest and obstructing police.

Marquez also is wanted for allegedly opening fire on a bounty hunter trying to take him into custody last month, Bavencoff said. The victim of the March 15 firearm assault in Chula Vista was treated for non-life-threatening bullet wounds.

The shooting outside a home on East J Street led to a 10-hour police standoff that ended when SWAT officers stormed the residence and found it unoccupied. Marquez has remained at large since.