Cunningham was sentenced in 2006 to eight years and four months in prison for his guilty pleas to conspiracy and tax evasion for taking $2.4 million in bribes in return for unduly influencing the awarding of Defense Department contracts. He was released in 2013.

After being incarcerated, Cunningham denied accepting bribes and said he regretted his plea. 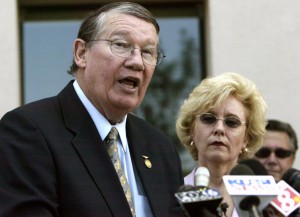 File-This July 2005 file photo shows former Republican U.S. Rep. Randy “Duke” Cunningham, flanked by his wife Nancy, during a news conference in San Marcos, Calif. Cunningham, whose feats as a Navy flying ace during the Vietnam War catapulted him to a U.S House career that ended in disgrace when he was convicted of accepting $2.4 million in bribes from defense contractors, is completing one of the longest prison sentence ever given to a member of Congress. Cunningham, 71, is due to be released Tuesday June 4, 2013. (AP Photo/Lenny Ignelzi,File)

Prior to politics, he flew an F-4 Phantom fighter jet for the U.S Navy during the Vietnam War.

In return, Cunningham worked to influence the awarding of tens of millions of dollars in defense contracts, then-U.S. Attorney Carol Lam said.

— the purchase of Cunningham’s home in Del Mar at an artificially inflated price by a defense contractor;

— the subsequent payoff of the mortgage of his new, multimillion- dollar home in Rancho Santa Fe by another defense contractor;

— a $200,000 down-payment by a third co-conspirator to enable Cunningham to purchase a condominium in Arlington, Virginia;

— the payment of the capital gains tax by the purchaser of Cunningham’s Del Mar home;

— the purchase and maintenance by a defense contractor of a yacht, the “Duke-Stir,” and a Rolls Royce for Cunningham; and

— payments by a defense contractor for a graduation party for Cunningham’s daughter, jewelry, home furnishings and travel and hotel expenses.

As a result of the plea bargain, Cunningham agreed to forfeit more than $1.8 million in cash and real property.

In a statement issued early Wednesday Washington time by the Office of the Press Secretary, the pardon for Cunningham was strongly supported by former House Speaker Newt Gingrich.