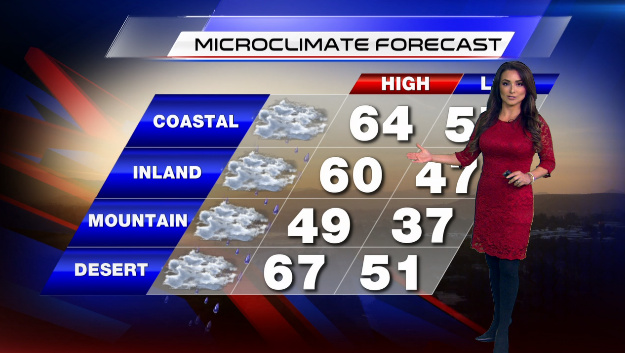 SAN DIEGO (KUSI) – A final round of precipitation, possibly the heaviest of the week, is falling over San Diego County Thursday along with high winds in the mountains and high surf at the beaches.

As of 8 a.m., the wet weather over the past four days had brought the least rain to San Ysidro — at 0.63 of an inch — while Julian received the brunt of the storms — with 2.41 inches of rain, according to the National Weather Service.

Along the coast, Oceanside received 1.38 inches over the four-day span while Brown Field airport in Otay Mesa got 0.65 of an inch, Carlsbad received 0.91 of an inch and the San Diego International Airport was doused by 0.67 of an inch.

Across the inland valleys, Fallbrook — at 1.83 inches — got the most precipitation for the period, followed by Santee with 1.5 inches, while the highest total for the local deserts was 0.87 of an inch, in San Felipe, east of Julian.

The NWS issued a wind advisory for the county mountains that is set to last through 7 a.m. Friday. A high-surf advisory will go into effect at 2 p.m. Thursday and last through 4 a.m. Saturday.

Snow levels will remain above 8,500 feet.

The final storm system is expected to leave the region by Thursday night and dry weather with warmer temperatures will prevail from Friday afternoon through next week, forecasters said.