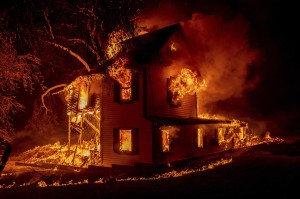 GRIZZLY FLATS, Calif. (AP) — Firefighters are facing dangerously windy weather as they struggle to keep the nation’s largest wildfire from moving toward a Northern California county seat, while a small forest town has been gutted by another inferno.

Forecasters have issued red flag warnings of critical fire conditions for most of Tuesday in the area of the month-old Dixie Fire.

Authorities say the fire is only about 8 miles from Susanville, home to about 18,000 people.

To the south, the Caldor Fire has left few homes standing in the town of Grizzly Flats, which has a population of about 1,200.