Global worries flare over whether US sliding toward Iran war

WASHINGTON (AP) — International worries that the Trump administration is sliding toward war with Iran flared into the open Tuesday amid skepticism about its claims that the Islamic Republic poses a growing threat to the U.S. and its allies in the Persian Gulf and beyond .

The U.S. military rebutted doubts expressed by a British general about such a threat. President Donald Trump denied a report that the administration has updated plans to send more than 100,000 troops to counter Iran if necessary. But Trump then stirred the controversy further by saying: “Would I do that? Absolutely.”

The general’s remarks exposed international skepticism over the American military build-up in the Middle East, a legacy of the 2003 invasion of Iraq that was predicated on false intelligence. U.S. officials have to date not provided any evidence to back up claims of an increased Iranian threat even as an ally general took the extraordinary step of publicly challenging the Trump administration. 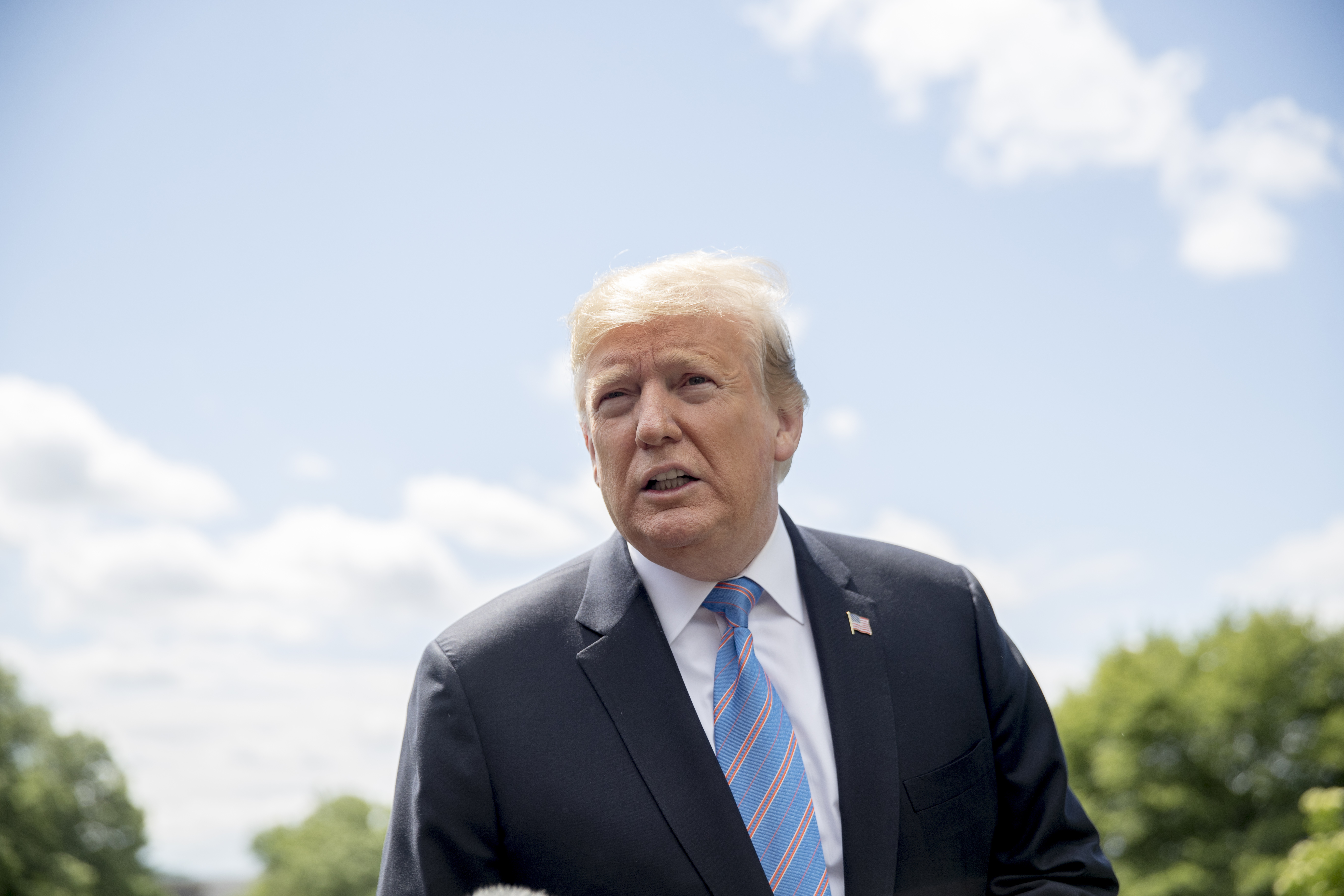 President Donald Trump listens to a question from a member of the media on the South Lawn of the White House in Washington, Tuesday, May 14, 2019, before boarding Marine One for a short trip to Andrews Air Force Base, Md., to travel to Louisiana. (AP Photo/Andrew Harnik)

“No, there’s been no increased threat from Iranian-backed forces in Iraq and Syria,” said Maj. Gen. Chris Ghika, a senior officer in the U.S.-backed coalition fighting the Islamic State group. Ghika, speaking in a video conference from coalition headquarters in Baghdad, told reporters at the Pentagon that the coalition monitors the presence of Iranian-backed forces “along with a whole range of others because that’s the environment we’re in.”

But he added, “There are a substantial number of militia groups in Iraq and Syria, and we don’t see any increased threat from any of them at this stage.”

Late in the day, in a rare public rebuttal of an allied military officer, U.S. Central Command said Ghika’s remarks “run counter to the identified credible threats” from Iranian-backed forces in the Mideast. In a written statement, Central Command said the coalition in Baghdad has increased the alert level for all service members in Iraq and Syria.

“As a result, (the coalition) is now at a high level of alert as we continue to closely monitor credible and possibly imminent threats to U.S. forces in Iraq,” the statement said.

At the White House, Trump, who has repeatedly argued for avoiding long-term conflicts in the Mideast, discounted a New York Times report that the U.S. has updated plans that could send up to 120,000 troops to counter Iran if it attacked American forces.

“Would I do that? Absolutely,” he told reporters. “But we have not planned for that. Hopefully we’re not going to have to plan for that. If we did that, we’d send a hell of a lot more troops than that.”

Reinforcing Trump’s denial, Secretary of State Mike Pompeo said at a joint news conference in Sochi with Russian Foreign Minister Sergei Lavrov, “We fundamentally do not seek war with Iran.”

A Trump administration official said a recent small meeting of national security officials was not focused on a military response to Iran, but instead concentrated on a range of other policy options, including diplomacy and economic sanctions. The official spoke on condition of anonymity to discuss internal deliberations.

Lavrov said Pompeo told him that a potential deployment of 120,000 U.S. troops to the Mideast was only a “rumor.” Lavrov said the international community needs to focus on diplomacy with Iran, including on the potentially explosive issue of Iran’s nuclear program, which is constrained by a U.S.-brokered deal in 2015 that Trump has abandoned.

U.S. Iran envoy Brian Hook told reporters traveling with Pompeo in Brussels that the secretary of state shared intelligence on Iran with allies since “Europe shares our concerns about stability in the Gulf and the Middle East.” What the Europeans do not share, however, is Washington’s more aggressive approach to Iran.

“We are very worried about the risk of a conflict happening by accident, with an escalation that is unintended really on either side but ends with some kind of conflict,” British Foreign Secretary Jeremy Hunt told reporters in Brussels.

“What we need is a period of calm to make sure that everyone understands what the other side is thinking,” Hunt said.

Last week, U.S. officials said they had detected signs of Iranian preparations for potential attacks on U.S. forces and interests in the Mideast, but Washington has not spelled out that threat.

The U.S. has about 5,000 troops in Iraq and about 2,000 in Syria as part of the coalition campaign to defeat the Islamic State group there. It also has long had a variety of air and naval forces stationed in Bahrain, Qatar and elsewhere in the Gulf, partly to support military operations against IS and partly as a counter to Iranian influence.

Gen. Ghika’s comments came amid dramatically heightened tensions in the Middle East. The U.S. in recent days has ordered the USS Abraham Lincoln aircraft carrier strike group to the Gulf region, plus four B-52 bombers. It also is moving a Patriot air-defense missile battery to an undisclosed country in the area. As of Tuesday, the Lincoln and its strike group had passed through the Bab-el-Mandeb Strait in the Red Sea, but officials would not disclose their exact location.

Tensions rose another notch with reports Sunday that four commercial vessels anchored off the United Arab Emirates had been damaged by sabotage.

A U.S. military team was sent to the UAE to investigate, and one U.S. official said the initial assessment is that each ship has a 5- to 10-foot hole in it, near or just below the water line. The official, who was not authorized to publicly discuss details of the investigation, said the early interpretation is that the holes were caused by explosive charges.

The official on Tuesday acknowledged seeing some photographs of the damage to the ships, but those images have not been made public. The official also said that the team is continuing to conduct forensic testing on the ship damage and that U.S. leaders are still awaiting the final report. The team’s initial assessment is that the damage was done by Iranian or Iranian-backed proxies, but they are still going through the evidence and have not yet reached a final conclusion, the official said.

The Latest: Philippines to ease lockdown in Manila next week