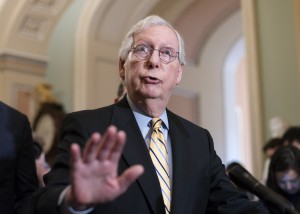 Senate Minority Leader Mitch McConnell, R-Ky., talks with reporters before a key test vote on the For the People Act, a sweeping bill that would overhaul the election system and voting rights, at the Capitol in Washington, Tuesday, June 22, 2021. The bill is a top priority for Democrats seeking to ensure access to the polls and mail in ballots, but it is opposed by Republicans as a federal overreach. (AP Photo/J. Scott Applewhite)

WASHINGTON (AP) — The Democrats’ sweeping attempt to rewrite U.S. election and voting law has stalled in the U.S. Senate.

The bill failed in a key test vote Tuesday, blocked by a wall of united Republican opposition.

The measure would bring the largest overhaul of the electoral system in a generation, striking down hurdles to voting that advocates view as the Civil Rights fight of the era.

But Republican leader Mitch McConnell called the bill a “a solution looking for a problem.”

The rejection forces majority Democrats to reckon with what comes next in the narrowly divided Senate.