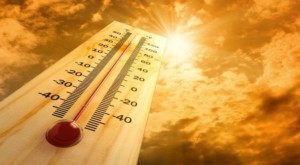 A high-pressure atmospheric system strengthening and expanding over the Southwestern United States kept things toasty across the region, generating thermometer readings up to the mid-90s along the coast and in the mountains, and past the triple-digit mark in the inland valleys and deserts, according to the National Weather Service.

Two local communities experienced record heat amid the regional swelter. The high of 85 degrees in Chula Vista exceeded the prior June 15 milestone of 76, set in 1993, and the maximum thermometer reading of 106 in Campo surpassed the old high for the date of 104, set in 1961, the NWS reported.

An excessive heat warning will be in effect through 9 p.m. Saturday for the deserts — where temperatures could surpass 120 degrees Thursday and Friday — along with coastal areas, the western valleys and the mountains.

The sultry conditions will significantly increase the potential for heat-related illnesses, particularly for those working or participating in outdoor activities, authorities advised. San Diego-area residents are advised to drink plenty of fluids, stay in air-conditioned rooms, seek out shade and check up on relatives and neighbors.

Young children and pets should never be left unattended in vehicles — but particularly during such hot weather, when car interiors can reach lethal temperatures in a matter of minutes, the NWS cautioned.

To help locals beat the heat, the county is offering “Cool Zone” sites in Alpine, Borrego Springs, Fallbrook, Lakeside, Potrero, Ramona, Santa Ysabel, Spring Valley and Valley Center. A full list of the locations can be found at: https://www.sandiegocounty.gov/hhsa/programs/ais/cool_zones/.