SAN DIEGO (KUSI) – A massive homeless camp has been getting a lot of attention for the past couple weeks.

Most people believe the encampment in question is located in the City of El Cajon, but it is actually is located within the county of San Diego.

On Good Evening San Diego, KUSI’s Dan Plante was out at the encampment again to address the absolute cesspool this encampment has become addressing the drug abuse and sex trafficking.

Sidewalk encampments are not allowed in the City of El Cajon, according to Mayor Bill Wells.

Instead of allowing sidewalk encampments, El Cajon spends more money per capita than any city or jurisdiction in the San Diego County region on treatment, as well as strict enforcement, Mayor Wells elaborated. 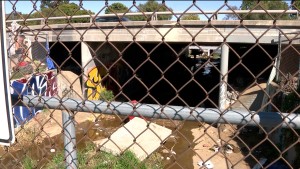 This development arrived one year after reports of missing 16-year-old Tarynn Finn in Santee.

For nearly five days, the entire county and even agencies were aware the teen was missing.

Finn was found five days later in a camper with a 32-year-old man at the homeless encampment along Magnolia Avenue in East County.

The adopted teenager has special needs and given her traumatic experience, has been receiving treatment.

During the year-and-a-half investigation, her mother, Sharie Finn, discovered “the tunnel,” a drain ditch from Parkway Plaza in El Cajon to Lakeside, where many sex crimes have occurred.