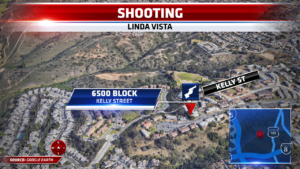 SAN DIEGO (KUSI) – A teen boy was killed late this afternoon in a shooting in the Linda Vista section of San Diego, prompting an investigation by homicide detectives, according to police and reports from the scene.

The shooting was reported about 6:05 p.m. in the 6500 block of Kelly Street, according to the San Diego Police Department.

Investigators say the victim was a 16-year-old boy who was taken by friends to a hospital, where he was pronounced dead.

The suspect, described as an Asian male driving a tan or gold vehicle with a black stripe, remains at large, the station reported.