SAN DIEGO (KUSI) – They are called the greatest generation, the men and woman who fought in World War II. They came back home, went to school, raised families and basically created the Middle Class that we know of today.

Sadly one of the World War II Veterans passed away on the place during the flight home. Three doctors on the plane tried to save the Vet’s life. 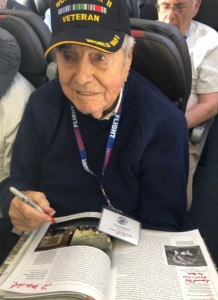 WWII veteran Frank Manchel, 95, collapsed on the flight back. “Frank Manchel was so excited to go on his Honor Flight. This trip was so special because he was able to be with both of his sons as well as his 93-year-old brother who met him in Washington, D.C. My father’s passing was the ending to the most amazing weekend, surrounded by his newest best friends. We thank all of you – Honor Flight San Diego, American Airlines, San Diego International Airport, friends, and supporters for your concern and for allowing the weekend to be so special for all of us to share together. Frank passed quickly and peacefully and the compassion and respect that that was shown to our family will always be treasured. May he rest in peace as he is now with his other beloved son Jimmy,” said his son, Bruce Manchel.

Manchel’s body was draped in an American Flag as it was removed from the plane and medical personnel, firefighters and law enforcement paid respects on the tarmac.