WASHINGTON (AP) — House Democrats announced two articles of impeachment Tuesday against President Donald Trump — abuse of power and obstruction of Congress — pushing toward historic votes over charges he corrupted the U.S. election process and endangered national security in his dealings with Ukraine.

Speaker Nancy Pelosi, flanked by the chairmen of the impeachment inquiry committees, stood at the Capitol for what she called a “solemn act.” Voting is expected in a matter of days in the Judiciary Committee and by Christmas in the full House. Trump insisted he did nothing wrong and his reelection campaign called it “rank partisanship.”

“He endangers our democracy; he endangers our national security,” said Rep. Jerrold Nadler, D-N.Y., the Judiciary chairman announcing the charges before a portrait of George Washington. “Our next election is at risk. … That is why we must act now.” 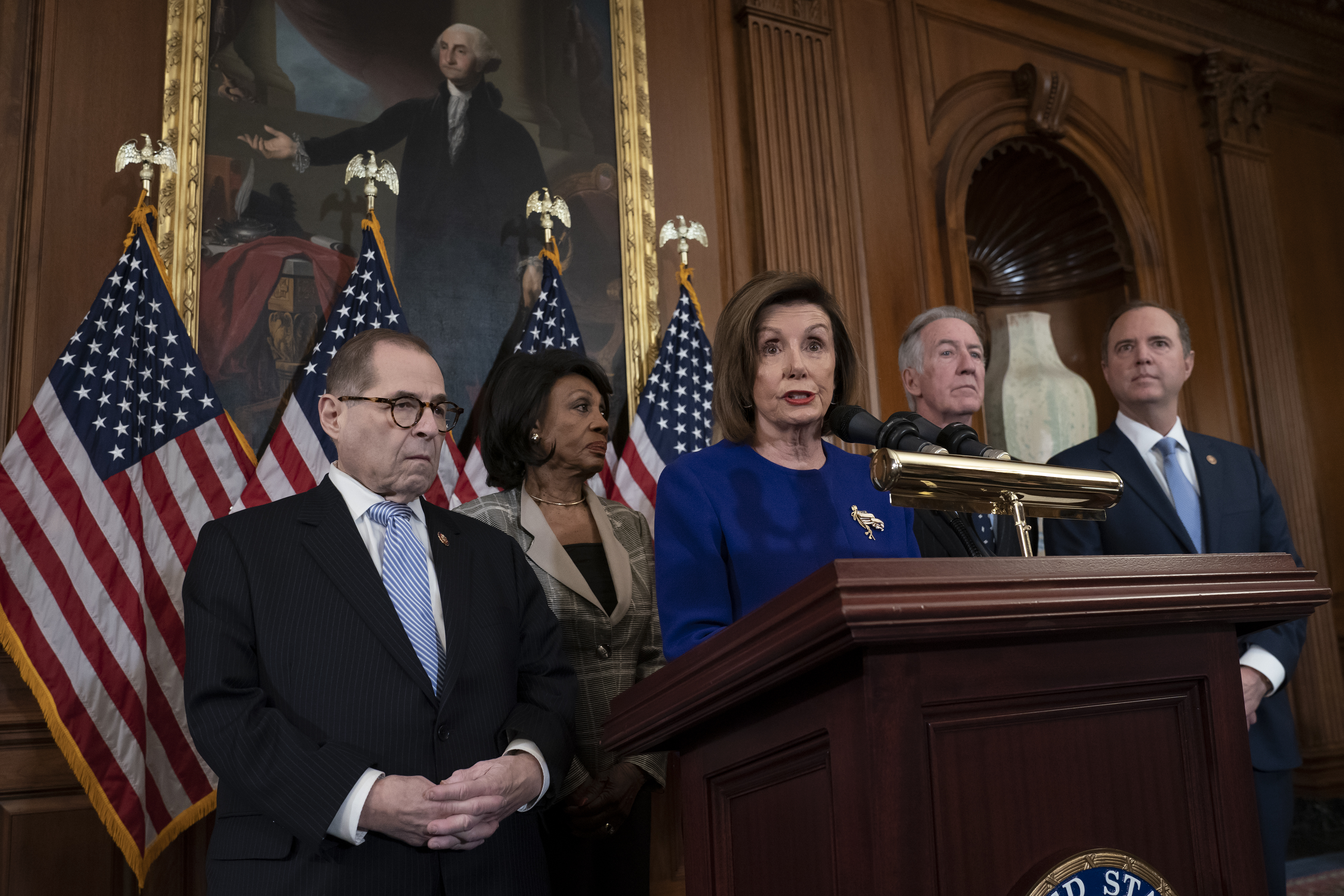 Trump tweeted ahead of the announcement that impeaching a president with a record like his would be “sheer Political Madness!”

The outcome, though, appears increasingly set as the House prepares for voting, as it has only three times in history against a U.S. president. Approval of the charges would send them to the Senate in January, where the Republican majority would be unlikely to convict Trump.

Democratic leaders say Trump put his political interests above those of the nation when he asked Ukraine to investigate corruption in regards to Hunter Biden and Burisma, and then withheld $400 million in military aid as the U.S. ally faced an aggressive Russia. They say he then tried obstructed Congress by stonewalling the House investigation.

In drafting the articles of impeachment, Pelosi faced a legal and political challenge of balancing the views of her majority while hitting the Constitution’s bar of “treason, bribery or other high crimes and misdemeanors.”

When asked during a Monday evening event if she had enough votes to impeach the Republican president, Pelosi said she would let House lawmakers vote their conscience.

“On an issue like this, we don’t count the votes. People will just make their voices known on it,” Pelosi said at The Wall Street Journal CEO Council. “I haven’t counted votes, nor will I.”

Trump, who has declined to mount a defense in the actual House hearings, tweeted Tuesday just as the six Democratic House committee chairmen prepared to make their announcement.

“To Impeach a President who has proven through results, including producing perhaps the strongest economy in our country’s history, to have one of the most successful presidencies ever, and most importantly, who has done NOTHING wrong, is sheer Political Madness! #2020Election,” he wrote on Twitter.

To Impeach a President who has proven through results, including producing perhaps the strongest economy in our country’s history, to have one of the most successful presidencies ever, and most importantly, who has done NOTHING wrong, is sheer Political Madness! #2020Election

The president also spent part of Monday tweeting against the impeachment proceedings. He and his allies have called the process “absurd.”

Nadler just said that I “pressured Ukraine to interfere in our 2020 Election.” Ridiculous, and he knows that is not true. Both the President & Foreign Minister of Ukraine said, many times, that there “WAS NO PRESSURE.” Nadler and the Dems know this, but refuse to acknowledge!

Shifty Schiff, a totally corrupt politician, made up a horrible and fraudulent statement, read it to Congress, and said those words came from me. He got caught, was very embarrassed, yet nothing happened to him for committing this fraud. He’ll eventually have to answer for this!

Read the Transcripts! “us” is a reference to USA, not me!

The next steps emerged in the swiftly moving proceedings as Pelosi convened a meeting of the impeachment committee chairmen at her office in the Capitol late Monday following an acrimonious, nearly 10-hour hearing at the Judiciary Committee, which could vote as soon as this week.

“I think there’s a lot of agreement,” Rep. Eliot Engel of New York, the Democratic chairman of the Foreign Affairs committee, told reporters as he exited Pelosi’s office. “A lot of us believe that what happened with Ukraine especially is not something we can just close our eyes to.”

At the Judiciary hearing, Democrats said Trump’s push to have Ukraine investigate rival Joe Biden while withholding U.S. military aid ran counter to U.S. policy and benefited Russia as well as himself.

“President Trump’s persistent and continuing effort to coerce a foreign country to help him cheat to win an election is a clear and present danger to our free and fair elections and to our national security,” said Dan Goldman, the director of investigations at the House Intelligence Committee, presenting the finding of the panel’s 300-page report of the inquiry.

Republicans rejected not just Goldman’s conclusion of the Ukraine matter; they also questioned his very appearance before the Judiciary panel. In a series of heated exchanges, they said Rep. Adam Schiff, the chairman of the Intelligence Committee, should appear rather than sending his lawyer.

From the White House, Trump tweeted repeatedly, assailing the “Witch Hunt!” and “Do Nothing Democrats.”

In drafting the articles of impeachment, Pelosi is facing a legal and political challenge of balancing the views of her majority while hitting the Constitution’s bar of “treason, bribery or other high crimes and misdemeanors.”

Nadler was blunt as he opened Monday’s hearing, saying, “President Trump put himself before country.”

Trump’s conduct, Nadler said at the end of the daylong hearing, “is clearly impeachable.”

Rep. Doug Collins of Georgia, the top Republican on the committee, said Democrats are racing to jam impeachment through on a “clock and a calendar” ahead of the 2020 presidential election.

“They can’t get over the fact that Donald Trump is the president of the United States, and they don’t have a candidate that can beat him,” Collins said.

In one testy exchange, Republican attorney Stephen Castor dismissed the transcript of Trump’s crucial call with Ukraine as “eight ambiguous lines” that did not amount to the president seeking a personal political favor.

Democrats argued vigorously that Trump’s meaning could not have been clearer in seeking political dirt on Biden, his possible opponent in the 2020 election.

The Republicans tried numerous times to halt or slow the proceedings, and the hearing was briefly interrupted early on by a protester shouting, “We voted for Donald Trump!” The protester was escorted from the House hearing room by Capitol Police.

The White House is refusing to participate in the impeachment process. Trump and and his allies acknowledge he likely will be impeached in the Democratic-controlled House, but they also expect acquittal next year in the Senate, where Republicans have the majority.

The president focused Monday on the long-awaited release of the Justice Department report into the 2016 Russia investigation. The inspector general found that the FBI was justified in opening its investigation into ties between the Trump presidential campaign and Russia and that the FBI did not act with political bias, despite “serious performance failures” up the bureau’s chain of command.

Democrats say Trump abused his power in a July 25 phone call when he asked Ukrainian President Volodymyr Zelenskiy for a favor in investigating Democrats. That was bribery, they say, since Trump was withholding nearly $400 million in military aid that Ukraine depended on to counter Russian aggression.

Pelosi and Democrats point to what they call a pattern of misconduct by Trump in seeking foreign interference in elections from Mueller’s inquiry of the Russia probe to Ukraine.