WASHINGTON (AP) — On the eve of his all-but-certain impeachment, President Donald Trump fired off a furious letter to House Speaker Nancy Pelosi Tuesday denouncing the “crusade” against him but acknowledging that at this point he was unlikely to change any votes.

At the Capitol, meanwhile, Democrats and Republicans sparred over the rules of de+bate for Wednesday’s historic session, setting aside the lofty rhetoric of constitutional duty for the rugged politics of the House action and the Senate trial that is expected to follow.

Trump, who would be just the third U.S. president to be impeached, seemed resigned to the House-then-Senate scenario, aiming his message less at Pelose and House Democrats than the broad audience of citizens — and 2020 voters — closely watching.

In the fiercely accusatory, sometimes rambling six-page letter, Trump defended his “absolutely perfect” phone call with the Ukraine president that sparked the impeachment inquiry. He also tried to justify anew the Ukrainian investigations he wanted into Democratic rival Joe Biden while withholding military aid from the vulnerable U.S. ally and disputed the charges of abuse of power and obstruction of Congres’ investigation in the charges against him.

“Ÿou are the ones bringing pain and suffering to our Republic for your own selfish, personal political and partisan gain,” Trump contended, accusing Democrats of “Trump Derangement Syndrome” while still smarting from their 2016 election losses.

Painting himself as a blameless victim, as he often does, he compared the impeachment inquiry to the ‘’Salem Witch Trials.” When asked later if he bore no responsibility for the proceedings, he said, “ No, I don’t think any. Zero, to put it mildly.”

Pelosi had no immediate response as House Democrats pushed ahead toward Wednesday’s debate and votes. The Democratic-majority Rules Committee met through the day, with lawmakers arguing over the parameters for the debate.

“It’s unfortunate that we have to be here today, but the actions of the president of the United States make that necessary,” said Chairman Jim McGovern, D-Mass. “The evidence is as clear as it is overwhelming.”

He said the president “jeopardized our national security. and he undermined our democracy” and added that “every day we let President Trump act like the law doesn’t apply to him, we move a little closer” to rule by dictators.

The top committee Republican, Rep. Tom Cole of Oklahoma, said the split view among Americans over impeachment should be reason enough not to proceed with the rare action. “When half of Americans are telling you what you are doing is wrong, you should listen,” he said.

No Republicans are expected to vote to impeach Trump. But one by one Democrats are amassing a majority from their ranks as lawmakers, including many freshmen who could risk reelection in districts where Trump is popular, announced they will join in voting for the two articles.

“We must impeach this president,” said a statement from Democratic Rep. Chrissy Houlahan of Pennsylvania, an Air Force veteran who is among a group of newly elected former national security officials calling for impeachment. “I grieve for our nation. But I cannot let history mark the behavior of our President as anything other than an unacceptable violation of his oath of office.”

Pelosi, who warned earlier this year against pursuing a strictly partisan impeachment, nonetheless has the numbers to approve it.

Thus, attentionis shifting to the Senate which, under the Constitution, is required to hold a trial on the charges. IThat trial is expected to begin in January, with the Republican-majority chamber all but sure to acquit Trump.

Hoping to dispatch with lengthy proceedings, Senate Majority Leader Mitch McConnell is rejecting the Democrats’ push for fresh impeachment testimony and making a last-ditch plea for the House to “turn back from the cliff” of Wednesday’s expected vote.

McConnell’s remarks Tuesday effectively slapped the door shut on negotiations for a deal proposed by the Democratic leader, Sen. Chuck Schumer, who wants to call top White House officials for the Senate trial.

“If House Democrats’ case is this deficient, this thin, the answer is not for the judge and jury to cure it here in the Senate,” McConnell said. “The answer is that the House should not impeach on this basis in the first place.”

Schumer’s proposal was the first overture in what were expected to be negotiations between the two leaders over the contours of a weeks-long trial. Trump wants a relatively broad, perhaps showy Senate proceeding to not only acquit but vindicate him of the impeachment charges, though he instructed officials not to appear in the House.

McConnell and most GOP senators prefer a swift trial to move on from impeachment. Many centrist House Democrats also are ready to vote and move on. Still, Schumer wants to hear from John Bolton, Mick Mulvaney and others current and former Trump officials as the proceedings push to his chamber for the trial.

“Why is the leader, why is the president so afraid to have these witnesses come testify?” asked Schumer from the Senate floor. “They certainly ought to be heard.”

The two articles of impeachment brought by the Democrats say Trump abused the power of his office by pressuring Ukraine to investigate Democratic rival Biden ahead of the 2020 election and obstructed Congress by aggressively trying to block the House investigation from its oversight duties as part of the nation’s system of checks and balances.

The president “betrayed the Nation by abusing his high office to enlist a foreign power in corrupting democratic elections,” says the 650-page report from the House Judiciary Committee. He withheld military aid from the ally as leverage, the report says, and “has demonstrated that he will remain a threat to national security and the Constitution if allowed to remain in office.”

The report also includes Republican rebuttals that defend his actions.

In addition to the topline charges, Trump has promoted lawyer Rudy Giuliani’s investigation of Biden and a widely debunked theory that it was actually Ukraine not Russia that interfered in the 2016 election, a conspiracy-laden idea that other most other Republicans have actively avoided.

One freshman Democrat, Rep. Jeff Van Drew of New Jersey, saw several staff members resign Monday after he said he would vote against impeachment and indicated he was switching parties to become a Republican.

McConnell is facing criticism for saying he’s taking his “cues” from the White House for the expected trial. Republicans say Schumer acted much the same two decades ago when the Senate prepared to vote on President Bill Clinton. 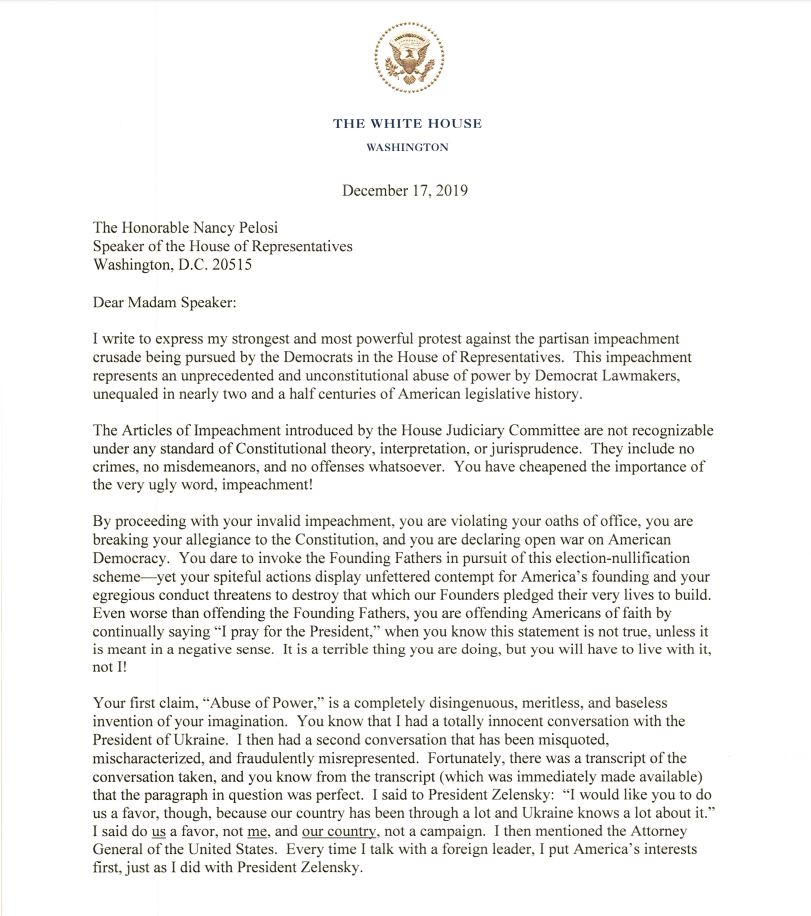 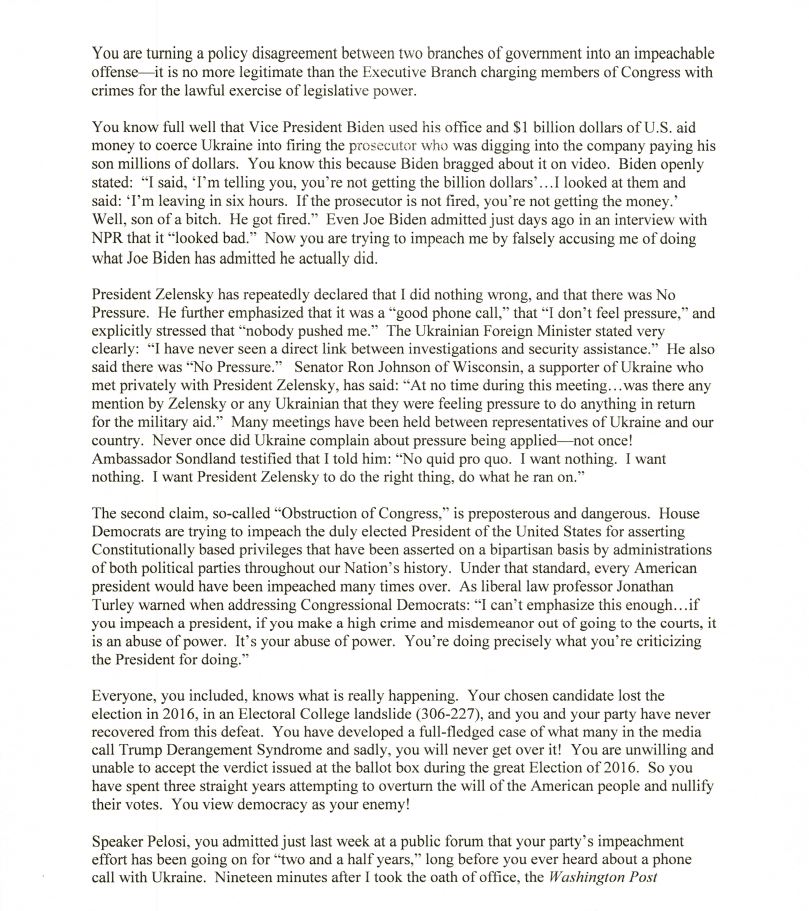 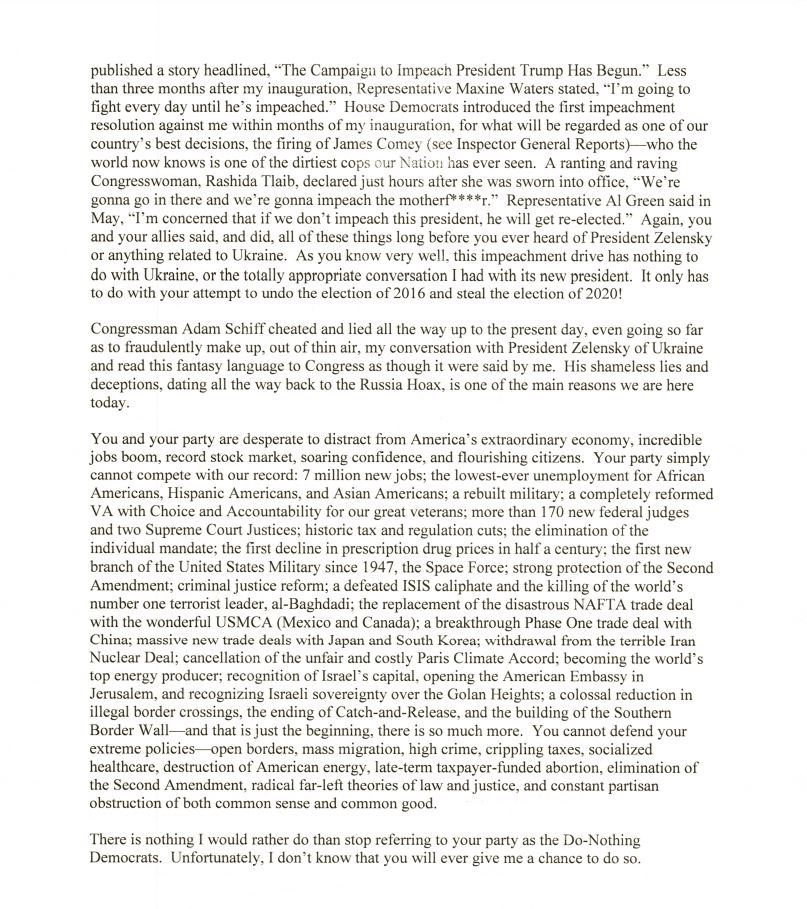 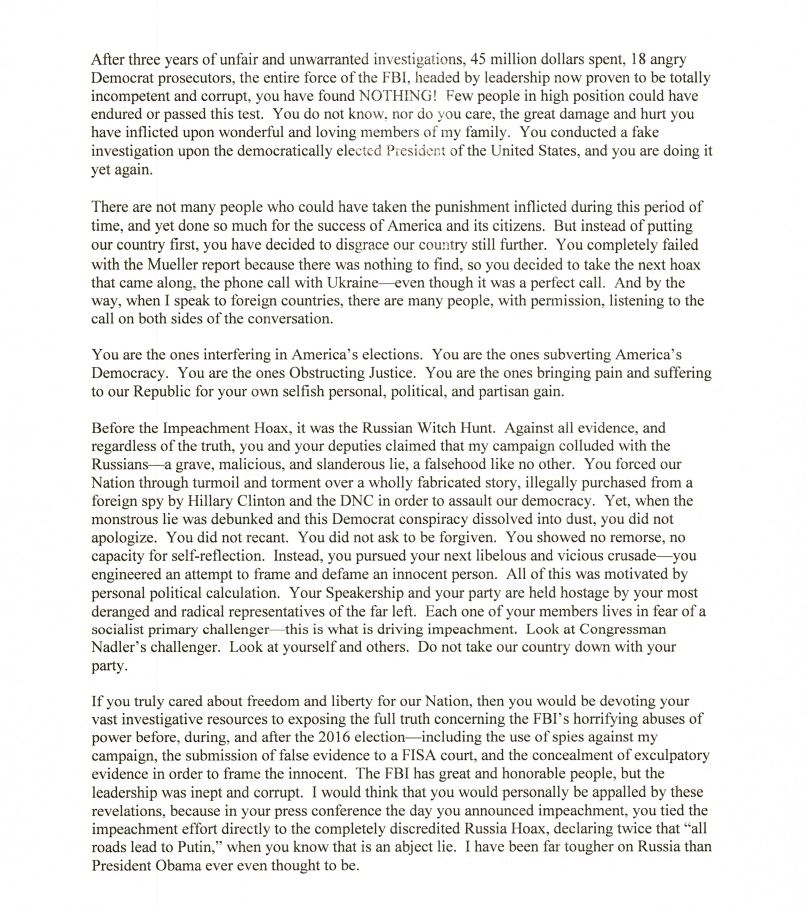 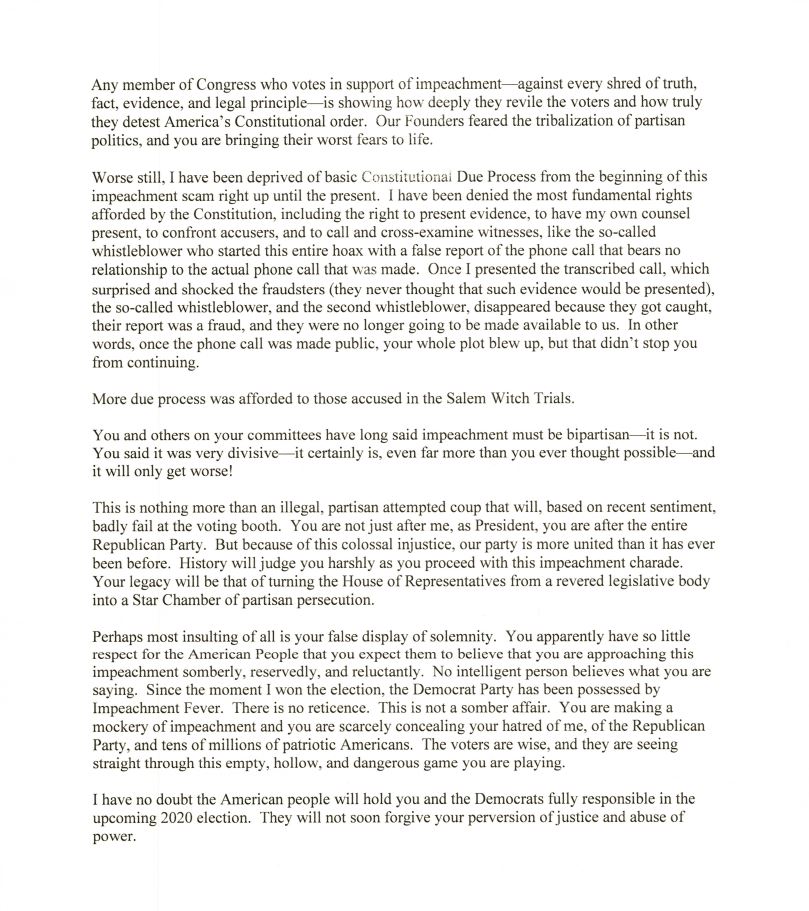 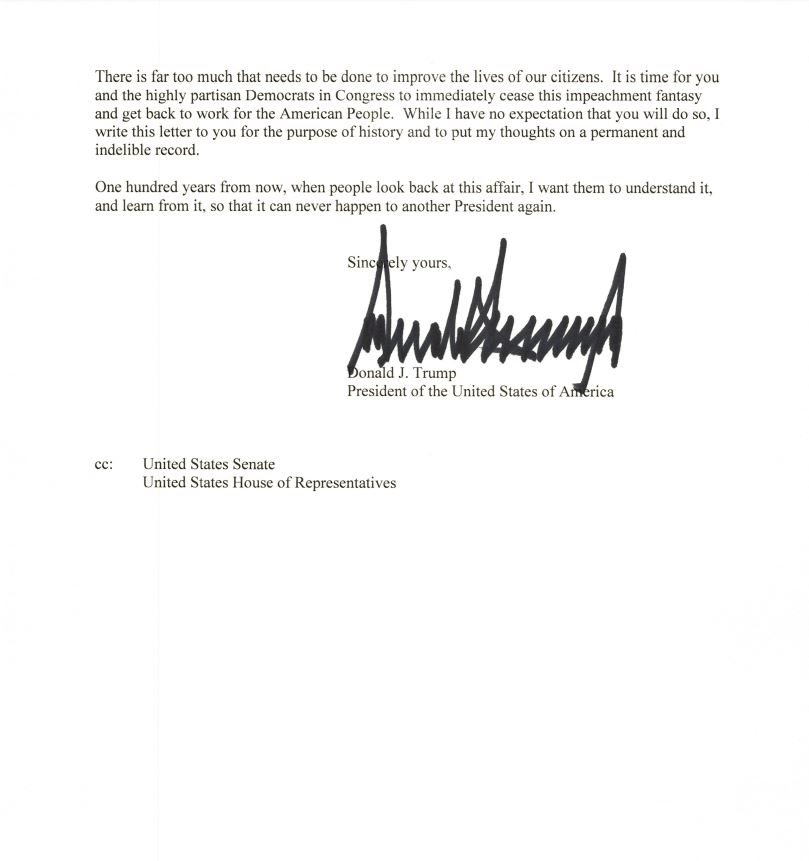