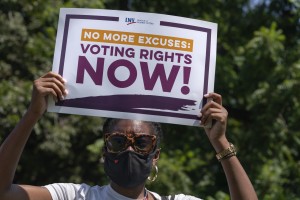 LaQuita Howard of Washington, with the League of Women Voters, attends a rally for voting rights, Tuesday, Aug. 24, 2021, near the White House in Washington. (AP Photo/Jacquelyn Martin)

WASHINGTON (AP) — House Democrats have passed legislation that would strengthen a landmark civil rights-era voting law weakened by the Supreme Court over the past decade.

It’s a step party leaders are touting as progress in their quest to turn back voting restrictions advanced in Republican-led states.

But the bill passed Tuesday on a 219-212 vote faces dim prospects in the Senate, where they do not have enough votes to overcome opposition from Republicans, who have excoriated it as “unnecessary” and a “power grab.”

That puts Democrats right back where they started, with slim chances of passing any voting legislation in time for 2022 midterm elections.