BROOKLYN, Iowa (AP) — A Mexican man charged with killing an Iowa college student worked on a dairy farm for years under a false name just a few miles from where the young woman was allegedly abducted while running last month, his employer said Wednesday.

The employer’s assertion came shortly after an attorney for Cristhian Bahena Rivera challenged the government’s statement that he was living in the country illegally, while also acknowledging that the suspect’s immigration status may be a “matter of interpretation.” The attorney said his conclusion was based on a statement from the employer, who later said it was incorrect.

Rivera was a good employee who showed up to work on time to take care of the cows and got along well with his co-workers, said Dane Lang, manager of Yarrabee Farms in Brooklyn, Iowa.

The 24-year-old kept coming to work after Mollie Tibbetts disappeared July 18, and “nobody saw a difference” in his demeanor, Lang said. His colleagues were stunned Tuesday to learn that he was not only the suspect in Tibbetts’ death, but that he had a different real name than what he went by on the farm, he said.

“Our employee is not who he said he was,” Lang said at a news conference at the farm. “This was shocking to us.” 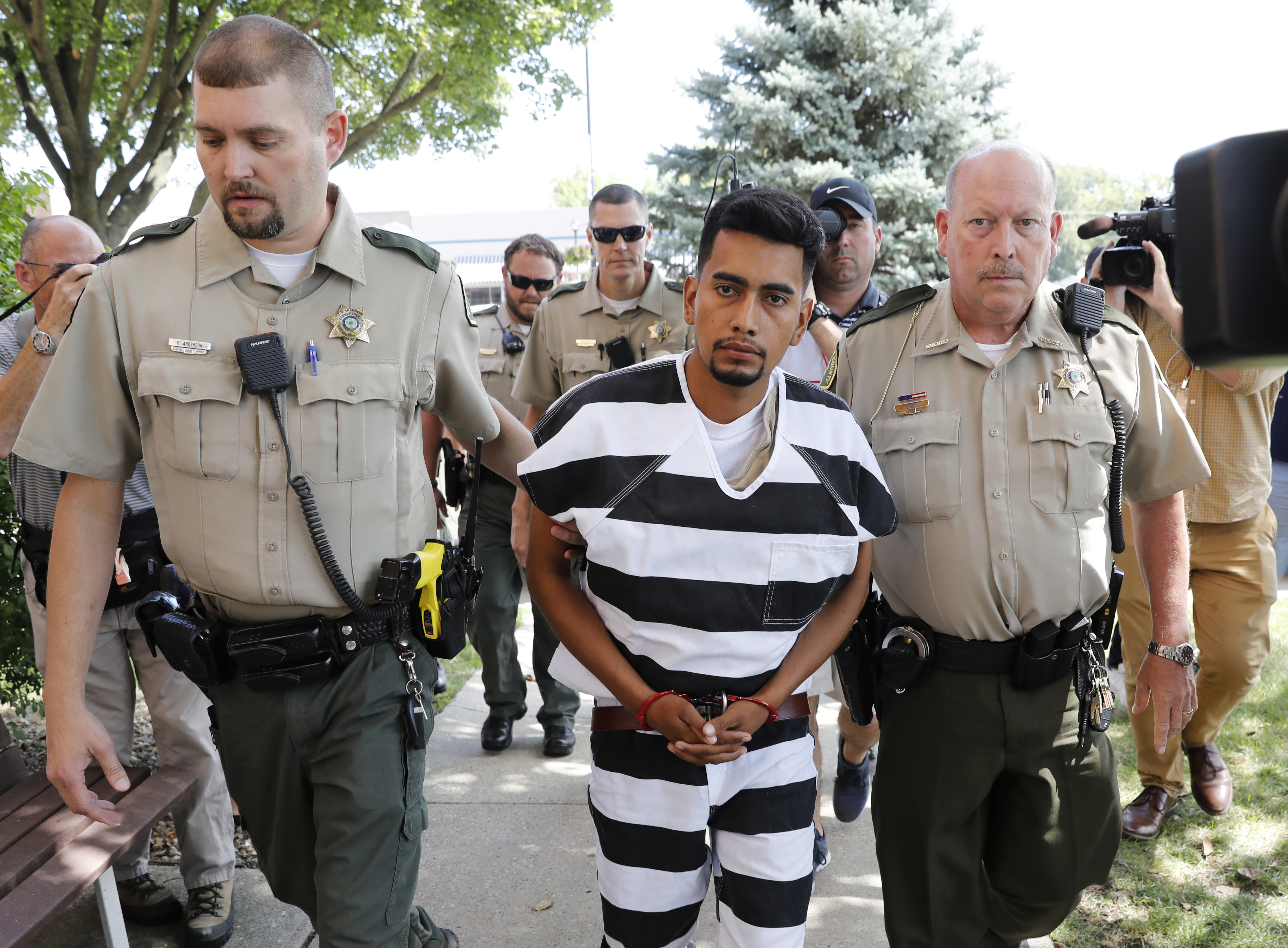 Cristhian Bahena Rivera is escorted into the Poweshiek County Courthouse for his initial court appearance, Wednesday, Aug. 22, 2018, in Montezuma, Iowa. Rivera is charged with first-degree murder in the death of Mollie Tibbetts, who disappeared July 18 from Brooklyn, Iowa. (AP Photo/Charlie Neibergall)

When Rivera was hired in 2014, he presented an out-of-state government-issued photo identification and a matching Social Security card, he said. That information was run through the Social Security Administration’s employment-verification system and checked out, he said.

Lang spoke two hours after Rivera made his initial court appearance on a charge of first-degree murder in the death of Tibbetts, a 20-year-old University of Iowa student. His defense attorney’s claims that Rivera was in the country legally were based on a statement that the farm issued Tuesday night. At Wednesday’s news conference, Lang said that statement was mistaken and apologized.

Defense attorney Allan M. Richards also lashed out at President Donald Trump for publicly declaring his client guilty at a rally Tuesday night in which he called the nation’s immigration system a disgrace. He said his client was a minor when he came to the U.S. with the equivalent of an eighth-grade education and described him as a hard worker with no prior criminal record.

“Sad and Sorry Trump has weighed in on this matter in national media which will poison the entire possible pool of jury members,” Richards wrote in a filing.

Trump noted the arrest at the rally in West Virginia.

“You heard about today with the illegal alien coming in, very sadly, from Mexico and you saw what happened to that incredible, beautiful young woman,” Trump told the crowd in Charleston. “Should’ve never happened. Illegally in our country. We’ve had a huge impact, but the laws are so bad. The immigration laws are such a disgrace. We’re getting them changed, but we have to get more Republicans. We have to get ’em.”

Investigators say they believe Rivera was in the country illegally when he abducted Tibbetts as she went on an evening jog, killed her and dumped her body in a cornfield. A judge on Wednesday agreed to increase his bond to $5 million from $1 million after prosecutor Scott Brown noted he was a potential flight risk.

Rivera sat stone-faced through much of the hearing, wearing a striped jail jumpsuit, handcuffs and speaking only briefly through a Spanish-speaking interpreter.

Immigration and Customs Enforcement officials have lodged an immigration detainer for Rivera, a move that means the agency has probable cause to believe he is subject to deportation.

Richards claimed Rivera had been recruited to work at the farm and paid taxes for years.

Yarrabee Farms is a small family farming operation that dates back to 1860 and has been owned for six generations by the Lang family, which is prominent in the community, farming circles and Republican politics. Dane Lang said the farm had received dozens of disturbing phone calls and messages since the employee’s arrest, including threats to kill his dog and burn down his buildings.

“This is a scary situation,” he said.

His father and farm co-owner Craig Lang, a former president of the Iowa Farm Bureau who ran earlier this year for state agriculture secretary, said the farm was cooperating with investigators and had already turned over Rivera’s hiring records. He said now was not the time to debate immigration but to grieve the loss of Tibbetts, who was studying psychology at the University of Iowa.

Rivera led investigators Tuesday to a body believed to be Tibbetts in a cornfield about 12 miles (19 kilometers) southeast of Brooklyn, where she was last seen, police said.

Rivera allegedly confessed to following her and then panicking when she threatened to call police. He told authorities that he blacked out and then dumped her bloody body in the secluded location.

Investigators have not released the cause and manner of Tibbetts’ death. Authorities released no information following an autopsy conducted Wednesday.

Rivera’s Facebook page described him as being from Guayabillo, a community of less than 500 people in the Mexican state of Guerrero. It’s about a three-hour drive from the resort city of Acapulco.

Investigators said they zeroed in on Rivera after obtaining footage from surveillance cameras in Brooklyn. The footage showed a Chevy Malibu connected to Rivera that was driving back and forth as Tibbetts was running in the area.

A conviction on first-degree murder carries a mandatory sentence of life in prison without parole in Iowa, which does not have the death penalty.