WASHINGTON (AP) — Unleashing unconcealed fury about Democrats and the press, President Donald Trump railed Wednesday against the investigation into his dealings with Ukraine, hours after House Democratic leaders warned the White House to expect a subpoena for documents. Democrats accused the administration of “flagrant disregard” of previous requests and said that refusal could be considered an impeachable offense.

Separately, the Democrats accused Trump of “an incitement to violence” against a national security whistleblower and advised him and his administration not to intimidate potential witnesses in the impeachment inquiry. The whistleblower exposed a July phone call that Trump had with Ukrainian President Volodymyr Zelenskiy in which Trump pressed for an investigation of Democratic political rival Joe Biden and his family. Democrats say the pressure on Zelenskiy, on its own, constitutes an abuse of power worthy of impeachment scrutiny.

In appearances in the Oval Office and a joint press conference with the president of Finland, Trump displayed an unusual show of anger as he defended what he has called his “perfect” phone call with Zelenskiy. He suggested, without evidence, that House intelligence committee Chairman Adam Schiff may have committed treason, and, again without evidence, labeled Biden and his son “stone cold crooked.”

President Trump hosts a news conference with the President of Finland.

At one point, Trump demanded that a reporter pressing him on his dealings with Ukraine move on. 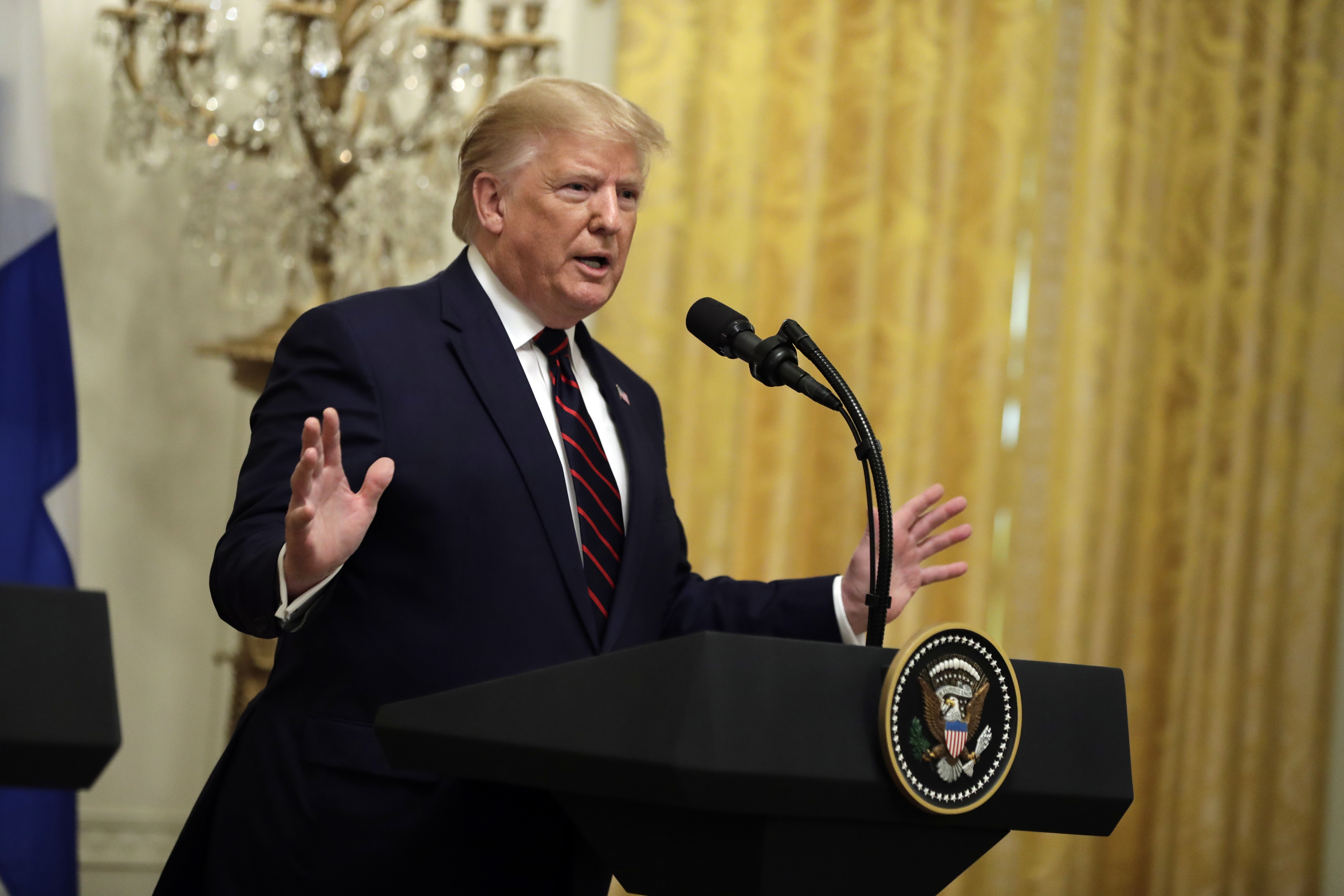 “Ask the president of Finland a question, please,” he said, emphasizing each word, eventually labeling the reporter “corrupt.”

Trump declined to answer yes or no when asked if he would cooperate with the House to produce requested documents on Ukraine.

“Well, I always cooperate,” he said, though his administration has repeatedly stonewalled congressional investigations. “This is a hoax,” he added.

Schiff, accusing Trump of inviting violence against the whistleblower, had said earlier that any effort to interfere with the Democrats’ investigations would be considered evidence of obstruction and could be included in articles of impeachment.

“We’re not fooling around here,” he said.

Trump showed no signs of letting up, tweeting a vulgarity during the House leaders’ news conference and saying “the Do Nothing Democrats should be focused on building up our Country.” Throwing criticism broadly, he assailed Schiff as a “low-life” and said House Speaker Nancy Pelosi’s San Francisco has turned into a “tent city” of homeless.

The Do Nothing Democrats should be focused on building up our Country, not wasting everyone’s time and energy on BULLSHIT, which is what they have been doing ever since I got overwhelmingly elected in 2016, 223-306. Get a better candidate this time, you’ll need it!

Trump has tweeted in recent days that he wants to “find out about” the whistleblower and question him or her, though the person’s identity is protected by the Whistleblower Protection Act.

The Democrats said they would subpoena the White House Friday for documents related to Trump’s dealings with Ukraine. House Oversight and Reform Chairman Elijah Cummings wrote in a memo to committee members that the action is necessary because the White House has ignored multiple requests.

Referring to a report on the whistleblower’s complaint, Cummings said that given the “stark and urgent warnings” the inspector general for the intelligence community has delivered to Congress, the panel has “no choice but to issue this subpoena.”

The subpoena will be directed toward acting chief of staff Mick Mulvaney and request 13 separate batches of documents related to the July call and related matters. The call unfolded against the backdrop of a $250 million foreign aid package for Ukraine that was being readied by Congress but stalled by Trump.

White House Press Secretary Stephanie Grisham said the subpoena is “nothing but more document requests, wasted time and taxpayer dollars that will ultimately show the president did nothing wrong.”

The subpoena announcement came as House and Senate staff prepared to meet with the State Department’s inspector general Wednesday afternoon.

Meanwhile, Secretary of State Mike Pompeo acknowledged Wednesday he was on the phone call between Trump and Zelenskiy that is at the center of the impeachment inquiry. He also continued to push back against what he said was Democrats’ “bullying and intimidation.”

Democrats have scheduled closed-door depositions Thursday with former special envoy to Ukraine Kurt Volker and next week with ousted U.S. Ambassador Marie Yovanovitch and three other State Department officials. Pompeo told the committees on Tuesday that the dates they had set were “not feasible,” but at least some of the officials are still coming.

The Democrats said that Pompeo’s resistance amounted to his own intimidation.

“Any effort to intimidate witnesses or prevent them from talking with Congress — including State Department employees — is illegal and will constitute evidence of obstruction of the impeachment inquiry,” said Schiff, Cummings and House Foreign Affairs Committee Chairman Eliot Engel in a Tuesday notice to Pompeo.

They said that if he was on Trump’s call, “Secretary Pompeo is now a fact witness in the House impeachment inquiry.” And they warned, “He should immediately cease intimidating department witnesses in order to protect himself and the president.”

Democrats often note that obstruction was one of the impeachment articles against Richard Nixon, who resigned the presidency in 1974 in the face of almost certain impeachment.

The committees are seeking voluntary testimony from the current and former officials as the House digs into State Department actions and Trump’s other calls with foreign leaders that have been shielded from scrutiny. They have also subpoenaed Pompeo for documents.

Volker played a direct role in trying to arrange meetings between Rudy Giuliani, who is Trump’s personal lawyer, and Zelenskiy, the chairmen said. The State Department said that Volker has confirmed that he put a Zelenskiy adviser in contact with Giuliani, at the Ukraine adviser’s request.

The former envoy, who has since resigned his position and so is not necessarily bound by Pompeo’s directions, is eager to appear as scheduled on Thursday, said one person familiar with the situation, but unauthorized to discuss it and granted anonymity. The career professional believes he acted appropriately and wants to tell his side of the situation, the person said.

Yovanovitch, the career diplomat whose abrupt recall from Ukraine earlier this year raised questions, is set to appear next week. The Democrats also want to hear from T. Ulrich Brechbuhl, a counselor at the State Department, who also listened in on the Trump-Zelenskiy call, they said.

A whistleblower alleged in an August letter to the inspector general for the intelligence community, Michael Atkinson, that the White House tried to “lock down” Trump’s July 25 phone call with the new Ukrainian president because it was worried about the contents being leaked to the public. The complaint was eventually made public after acting Director of Intelligence Joseph Maguire withheld it from Congress for several weeks.

In recent days, it has been disclosed that the administration similarly tried to restrict information about Trump’s calls with other foreign leaders, including Russia’s Vladimir Putin and Saudi Arabia’s Mohammed bin Salman, by moving memos onto a highly classified computer system.

Ukraine’s president told reporters Tuesday he has never met or spoken with Giuliani. Zelenskiy insisted that “it is impossible to put pressure on me.” He said he stressed the importance of the military aid repeatedly in discussions with Trump, but “it wasn’t explained to me” why the money didn’t come through until September.

In Russia, Putin said scrutiny over the phone call showed that Trump’s adversaries are using “every excuse” to attack him.

Wednesday evening, the New York Times published a report saying the Democratic head of the House Intelligence Committe, Rep. Adam Schiff, “learned about the outlines of a C.I.A. officer’s concerns that President Trump had abused his power days before the officer filed a whistle-blower complaint…” The full NYT report can be read here.

The @NYTimes reports that @RepAdamSchiff got an early account of the accusations made in the whistleblower's report of the Ukraine phone call.

Trump was quick to criticize the Congressman for lying to Americans on the floor of Congress.