WASHINGTON (AP) — House Speaker Nancy Pelosi had only been in office for a few hours when a handful of Democrats defied her persistent calls not to begin the new Congress by talking about impeachment.

Just after Pelosi was sworn in Thursday, longtime Democratic Reps. Brad Sherman of California and Al Green of Texas introduced articles of impeachment against President Donald Trump. That evening, newly elected Rep. Rashida Tlaib of Michigan riled up a supportive crowd by calling the president a profanity and predicting that he will be removed from office. 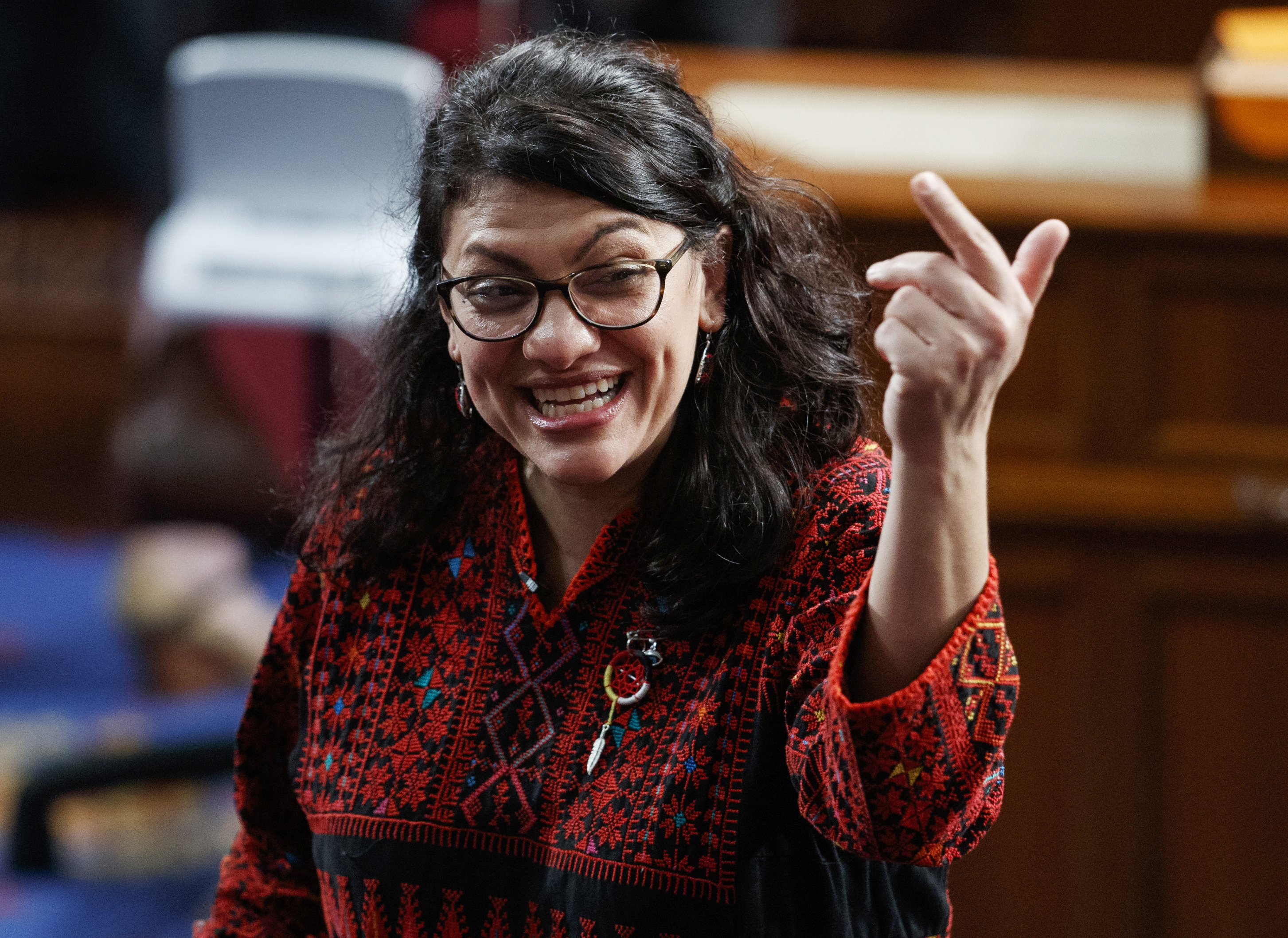 In this Thursday, Jan. 3, 2019 photo, then Rep.-elect Rashida Tlaib of Michigan, is shown on the house floor before being sworn into the 116th Congress at the U.S. Capitol in Washington. Tlaib exclaimed at an event late Thursday that Democrats were going to “impeach the mother——.” According to video and comments on Twitter, she apparently made the comments during a party hosted by the liberal activist group MoveOn. (AP Photo/Carolyn Kaster)

Tension over impeachment is likely to be a persistent thorn for Pelosi, who will have to balance between a small, vocal group of the most liberal members of her caucus, who want to see Trump removed immediately, and the majority of her members who want to wait for special counsel Robert Mueller’s Russia investigation to finish. Pelosi purposely avoided — and encouraged most fellow Democrats to avoid — any talk of impeachment during the election, believing there could be backlash from voters.

While eager to paint impeachment as the Democrats’ only agenda, Trump has also expressed some worry both publicly and privately at the prospect. He has told confidants that he finds the impeachment talk somewhat unnerving, according to an outside adviser who spoke to him in recent days.

The president, who has long fashioned himself as the ultimate winner, told the confidant that he worried that impeachment, even if he retained office, would be a stain on his legacy. And while he thought the impeachment would rally his own base in the 2020 election it could hurt his standing with foreign leaders as he negotiates trade deals, according to the adviser.

While many Democrats might favor impeachment, those calling for it now are largely outliers. Most Democratic lawmakers listened to Pelosi and campaigned on kitchen table issues such as health care and jobs and prefer to keep them at the forefront of the party’s focus.

Still, it will be hard for Pelosi to quiet some on her left flank who see their new majority as a direct challenge to Trump.

“Impeachment is on the table,” Sherman said. “You can’t take it off the table.”

Tlaib, who represents a liberal district in Detroit, exclaimed at an event late Thursday that Democrats were going to “impeach the mother——.” She didn’t back down Friday, tweeting that “I will always speak truth to power.” She added the hashtag, “#unapologeticallyMe.”

Her spokesman, Denzel McCampbell, said in a statement that Tlaib, one of only two Muslim women in Congress, “was elected to shake up Washington” and will not stay silent.

“The congresswoman absolutely believes he needs to be impeached. She ran and won by making this very clear to the voters in her district,” McCampbell said.

Pelosi said Friday at an MSNBC town hall said she wouldn’t censor her colleagues, and that Tlaib’s language was no worse than things Trump has said.

Still, Pelosi said she didn’t like the language and wouldn’t use it. She said, as she has many times before, that the House shouldn’t move to impeach Trump without more facts and that she believes impeachment is divisive.

The prospect of that division delights Republicans, who have used impeachment calls to fire up their base of voters. Trump immediately seized on the topic, asking in a tweet Friday, “How do you impeach a president who has won perhaps the greatest election of all time, done nothing wrong.”

Speaking later Friday to reporters in the Rose Garden, Trump said he thought Tlaib’s comments were “disgraceful” and she “dishonored herself.”

At a meeting at the White House Friday on the government shutdown, Trump opened his remarks with his concerns about impeachment, according to a White House official and a tweet from Pelosi’s spokesman Drew Hammill.

Trump said that Pelosi assured him during the meeting that “we’re not looking to impeach you,” and that he replied “that’s good, Nancy, that’s good.”

Hammill later tweeted a slightly different recap: “Speaker Pelosi made clear that today’s meeting was about re-opening government, not impeachment.”

There has been some discussion in Trump’s orbit about how to deal with a possible impeachment effort. Former House Speaker Newt Gingrich, who led impeachment efforts against President Bill Clinton two decades ago, encouraged conservatives to foster what he believes would be counter-productive impeachment talk among Democrats. The 1998 battle backfired on Republicans, who were seen as overreaching while Clinton’s poll numbers rose.

“Make it the speaker’s problem, make her deal with the nutty wing of her party,” Gingrich said in a recent interview with The Associated Press.

Top Democrats have so far supported Pelosi’s cautious approach to impeachment, with House Judiciary Chairman Jerrold Nadler also saying that it is a divisive, even traumatic, process that should only be done with Republican support. Both Nadler and Pelosi were in Congress during Clinton’s impeachment.

Sherman and Green forced votes to impeach Trump in 2017 and 2018, but the Republican House blocked those resolutions twice, with the help of many Democrats who said the effort was premature.

Even if the House should approve articles of impeachment — very unlikely at present — a two-thirds-majority vote to convict Trump in the Republican-led Senate and remove him from office would seem out of the question, barring new revelations or a dramatic decline in the president’s political support.

Other Democrats were more forgiving, even if they disagreed.

“I think some of our new members probably don’t realize that you are always on, that when you are a member of Congress, there’s always someone listening,” said Rep. Jan Schakowsky, D-Ill.

“I think it’s a forgivable sin, an outburst of exuberance with her and her supporters, and I think we all need to move on,” he said. “It doesn’t reflect the caucus, and I’m sure upon reflection, she might choose other words to describe her feelings.”