In devotion to Trump, House GOP taps Stefanik for a top post 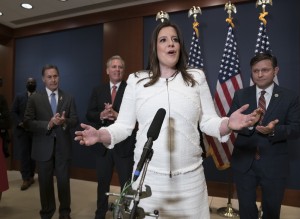 The New Yorker’s elevation highlights how a party whose lodestar has long been conservative policies increasingly views devotion to the former president as indispensable to electoral success.

Stefanik is a Trump stalwart, and on Friday she was elected to the No. 3 leadership job that until this week belonged to Rep. Liz Cheney.

ur the violent Jan. 6 Capitol insurrection and relentlessly pushing his false claims that voting fraud caused his November reelection defeat.

OMBAC awaiting permit, but confident Over The Line will happen in 2021

'Over-the-Line' is coming back