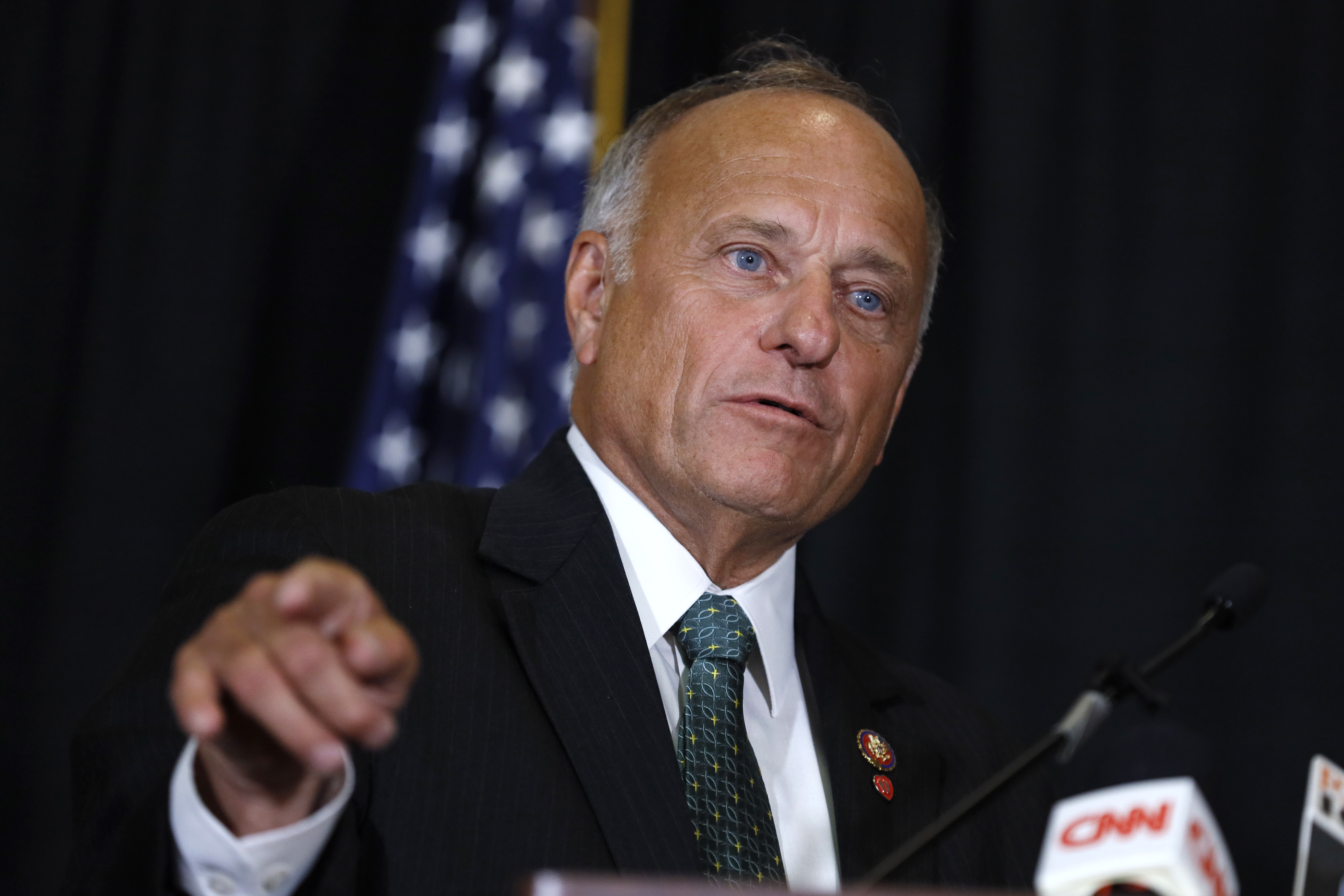 FILE – In this Aug. 23, 2019, file photo, Rep. Steve King, R-Iowa, speaks during a news conference in Des Moines, Iowa. King is on the outs with a significant bloc of his long-reliable conservative base, but not for almost two decades of incendiary utterances about abortion, immigrants and Islam. (AP Photo/Charlie Neibergall, File)

The nine-term congressman, shunned by his party leadership in Washington and many of his longtime supporters at home, lost to well-funded state Sen. Randy Feenstra in a five-way GOP primary. The challengers argued that King’s loss of clout, even more than his continuous string of provocative and racially-charged statements, was reason enough for turning on him.

Iowa Democrats also chose a challenger for Republican freshman Sen. Joni Ernst in a race earlier thought to heavily favor Ernst until her approval shrank over the past year. Des Moines businesswoman Theresa Greenfield, who raised the most money and garnered the widest cross-section of the Iowa Democratic coalition of elected officials and labor unions, won the nomination over three others.

But the focus was on the 4th District primary featuring King, the lone Republican in Iowa’s U.S. House delegation.

King was stripped of his committee assignments in 2019 for comments appearing to question the criticism of white nationalism in an era of increased sensitivity among Republicans nationally about the alt-right and white supremacists. He wondered aloud in a New York Times story about when the term “white supremacist” became offensive. King said the remarks were taken out of context.

The 71-year-old had piled up provocative statements throughout the years, comparing immigrants to livestock and appeared to make light of rape and incest in defending his anti-abortion views.

Critics in both parties charged that King was no longer an effective representative for Iowa’s 4th Congressional District on agriculture and other local issues.

Establishment Republicans suggested King’s ouster would easily keep the seat in the party’s hands, warning a King primary victory would jeopardize it. Feenstra faces Democrat J.D. Schoulten, who lost by 2 percentage points to King in 2018.

King was vastly outspent by Feenstra and conservative groups backing him, including onetime King backer National Right to Life, and the U.S. Chamber of Commerce, the nation’s largest business lobbying group.

“I called Randy Feestra a little bit ago and conceded the race to him, and I pointed out that there’s some powerful elements in the swamp and he’s going to have an awfully hard time pushing back against them,” King said, referring to outside groups that spent to support Feenstra and attack King. “He assured me that’s what he would do, and I’m thinking of those super PACs that came into this race and how powerful they are.”

Several of King’s former supporters shrugged at the litany of comments that fueled the congressman’s love-hate relationship with national media. However, they drew the line not with the comments published in the Times story but the reaction by House GOP leadership.

King was tossed from the Judiciary Committee, which would have given him a high profile role defending President Donald Trump during the 2019 impeachment hearings. He also lost his seat on the agriculture panel, a blow to the representative whose district produced more agricultural products in raw dollars than any district but Nebraska’s massive 3rd District, according to the most recent federal data.

“I personally feel very let down about some of the things that have happened because we need someone who is strong in agriculture from this area,” said former King supporter, state Sen. Annette Sweeney, who backed Feenstra.

King said during the campaign he had been assured privately by House Minority Leader Kevin McCarthy that he’d support King’s reinstatement on the committees, a claim McCarthy dismissed publicly to reporters last month.

Democrats chose from four relative unknowns to take on Ernst in what has has shaped up to be a more competitive Senate race than expected.

Ernst’s job approval and overall favorable ratings have dropped in the past year as she has sought to balance support for President Donald Trump, who is popular with Republicans but far less so among others in the state.

Greenfield had the edge, in part because of her compelling story of being widowed as a young mother and owing her rebound to Democratic priorities, Social Security and union benefits.

Perhaps most notably, the 55-year-old Greenfield impressed with her fundraising, bringing in more than $7 million since entering the race last year. That’s at least $5 million more than any of her Democratic opponents and reflects the endorsement of the Democrats’ national Senate campaign arm.

While Ernst has lost some of her footing, it’s difficult to say how the Senate race proceeds in light of the continuing pandemic, the uncertain economy and now protests over over police treatment of African Americans, including in Iowa where Trump won by more than 9 percentage points in 2016.

“Anybody who can predict what the state of the economy will be, any sense of community people have, where the partisan tendencies go between now and November, it’s just really hard to say,” said senior Ernst adviser David Kochel.

One recent data point, lost on many except Iowa Democratic leaders amid the ongoing crises: Registered Democrats in Iowa edged registered Republicans in March for the first time in more than six years.

The Latest: Doctor's referral not needed for NCarolina tests

US notifies UN of withdrawal from World Health Organization