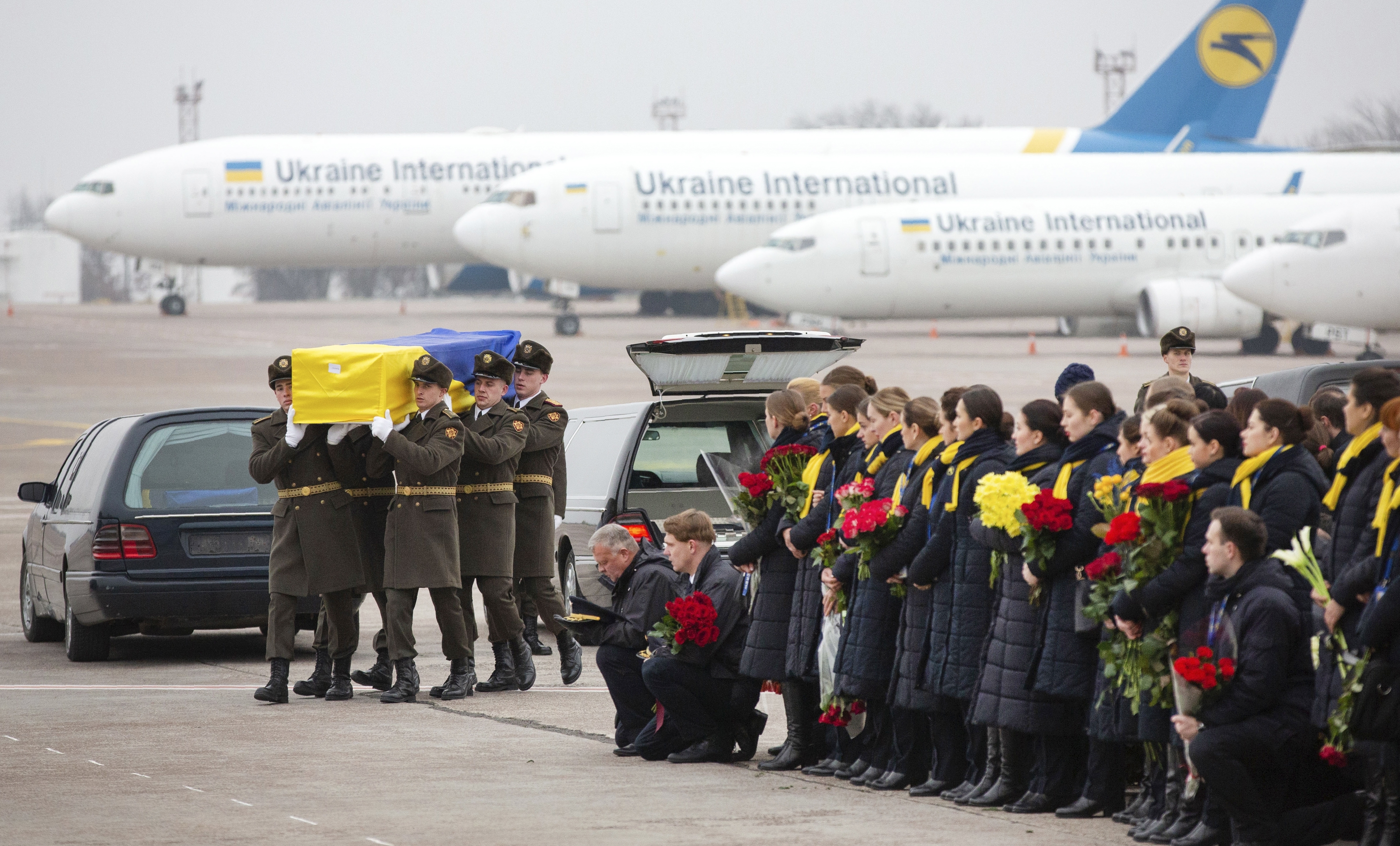 In this photo provided by the Ukrainian Presidential Press Office, honor guard carry a coffin of the one of the eleven Ukrainian victims of the Ukrainian 737-800 plane that crashed on the outskirts of Tehran, at Borispil international airport outside Kyiv, Ukraine, Sunday, Jan. 19, 2020. An Ukrainian passenger jet carrying 176 people has crashed just minutes after taking off from the Iranian capital’s main airport on Jan. 8, 2020. (Ukrainian Presidential Press Office via AP)

DUBAI, United Arab Emirates (AP) — Iran acknowledged on Tuesday that its armed forces fired two Russian anti-aircraft missiles at a Ukrainian jetliner that crashed after taking off from Tehran’s main airport earlier this month, killing all 176 people on board.

The new preliminary report by Iran’s Civil Aviation Organization however stopped short of blaming the TOR-M1 for the crash of the Boeing 737-800, flown by Ukraine International Airways.

For days after the Jan. 8 shootdown, Iran denied that it fired missiles at the plane, initially blaming a technical malfunction and engine fire for the crash.

However, after the U.S. and Canada blamed missile fire for the crash, Iran’s armed forces said anti-aircraft fire from the country’s paramilitary Revolutionary Guard had downed the flight.

The new report identified the missiles fired at the aircraft as coming from the TOR-M1. In 2017, Iran received the delivery of 29 TOR-M1 units from Russia under a contract worth an estimated $700 million.

However, the report said “the impact of these missiles on the accident and the analysis of this action is under investigation.”

Surveillance footage earlier obtained by The Associated Press showed two missiles were fired at the plane. The two minutes of black-and-white footage purportedly shows one missile streaking across the sky and exploding near the plane. Ten seconds later, another missile is fired. Some 20 seconds after the first explosion, another strikes near the plane. A ball of flames then falls from the sky out of frame.

The footage corresponded with AP reporting, appeared genuine and matched geographic features of the area. It also explained how so many people filmed the shoot down: the first explosion drew their attention so they turned their mobile phone cameras to the predawn sky.

The fire from the explosion, however, appears not to have reached inside the cabin, the report said, citing the condition of debris later recovered from the crash.

The Tor short-range air defense system, code-named the SA-15 by NATO, was designed during Soviet times to shoot down aircraft and precision guided weapons.

It is mounted on a tracked vehicle and carries a radar and a pack of eight missiles. Each vehicle can operate independently. Tor has a range of up to 12 kilometers (7.5 miles) and can hit aerial targets at altitudes of up to 6 kilometers (about 19,700 feet).

Tor missiles explode near their target, taking it down with shrapnel that devastates engines, fuel tanks and other vital components.

Iranian officials have offered contradictory remarks on whether they’ll send the plane’s flight data and cockpit voice recorders abroad to be analyzed. The preliminary report by the Civil Aviation Organization said Iranian officials had asked French and American authorities to send them “up-to-date equipment” to pull the data in Iran.

In other developments on Tuesday, South Korea Defense Ministry announced its anti-piracy unit operating in the Gulf of Aden was temporarily expanding its mission to the Strait of Hormuz. A ministry statement said the decision was meant to help ensure the safe passage of South Korean vessels and nationals through the waterway. It said the unit’s expanded operation will include the Gulf of Oman and the Persian Gulf.

The ministry said the unit will conduct an independent operation but will cooperate with a U.S.-led coalition if necessary. Already, a U.S.-led operation is surveilling the strait, the narrow mouth of the Persian Gulf through which 20% of all the world’s oil passes. A French-led naval coalition is also being created.

The missions began after mysterious explosions last summer targeted oil tankers near the strait, attacks the U.S. blamed on Iran. Tehran denied being involved, though it did seize tankers amid wider tensions with the West over its unraveling nuclear deal with world powers.

Meanwhile, a little-known Iranian lawmaker was quoted as offering a “$3 million cash prize for anybody that would kill (President Donald) Trump.” It’s not clear where Ahmad Hamzeh, a lawmaker for the town of Kahnouj in Kerman province, believed the money would come from, though he implied the province would offer the cash.

Related: University to celebrate life of student killed in airliner shot down in Iran