A community organizer, Vazquez was born and raised in City Heights. During the coronavirus pandemic, he has advocated for housing rights and worked with the San Diego-area nonprofit Border Angels. He is the executive director of Organizing For Progress.

“(Vazquez) is eager to bring a new approach to local politics, with experience, a voice of conscience, and empathy to get the necessary resources for working families to bounce back from the global pandemic through legislation that helps them retake control of their lives,” a campaign news release said.

Vazquez goes up against Congressman Juan Vargas, who has already served for five terms and will be seeking reelection for the 52nd Congressional District.

Rep. Scott Peters, D-San Diego, has represented the 52nd Congressional District for nearly a decade, but now falls within the new 50th District, which comprises much of central San Diego along with San Marcos and south Escondido in North County.

Candidates for the June primary election can file nomination papers with the Registrar of Voters starting Feb. 14 and must complete election paperwork by March 11. 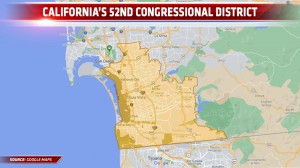