NEW YORK (AP) — Joe Biden’s first presidential news conference was notable for what was missing after predecessor Donald Trump: no contentious exchanges with reporters, no questions about COVID-19.

The last omission was probably the least expected, considering the pandemic has killed more than half a million Americans and kept much of the country home for the past year. 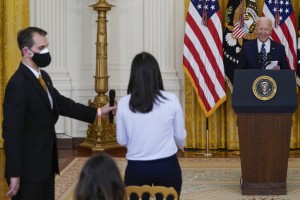 President Joe Biden listens to a question during a news conference in the East Room of the White House, Thursday, March 25, 2021, in Washington. (AP Photo/Evan Vucci)

Many in the news media had been impatient since Biden had not submitted to a formal question-and-answer session with reporters until his 65th day in the office. When he finally did Thursday, it was carried live on the major broadcast and cable news networks.

Before taking a question, Biden announced he was setting a new goal of having 200 million vaccine doses for the coronavirus administered during his first 100 days in office.

And that was it. None of the 10 reporters who questioned him, some on multiple topics, brought the topic up. Noting that in a tweet, Sheryl Gay Stolberg of The New York Times said the questions “suggest that coronavirus is no longer Topic A.”

“Pretty sure it is for the American people and the Biden White House,” White House Chief of Staff Ron Klain tweeted in response.

Four questioners brought up immigration and the Mexican border, while three asked about the filibuster, the arcane Senate rule that will be key to getting legislation passed. Not quite three months into office, Biden was asked whether he would run for reelection and if Vice President Kamala Harris would be on his ticket.

Biden was occasionally direct, occasionally windy and occasionally cagey in response to questions. When a Bloomberg reporter asked specific questions about economic policy and China, Biden instead embarked on a lengthy verbal treatise on relations between the two countries.

A question about gun control devolved into a long discussion of the president’s infrastructure plans.