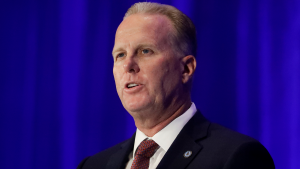 Earlier this week, Faulconer’s campaign announced it planned to sue the Secretary of State’s Office regarding his ballot designation, alleging that no regulations prohibit the use of the word “retired.”

Secretary of State Shirley Weber’s court filings argue that Faulconer was termed out as San Diego’s mayor and thus did not voluntarily retire from the office.

Faulconer argued in court papers that he took the mayor’s job knowing he would eventually have to depart the office due to term limits, meaning he “voluntarily undertook a job that would, as a matter of law, force his early retirement from that job.”

The written ruling issued by Sacramento Superior Court Judge Shelleyanne Chang does not list her reasons for denying Faulconer’s request other than “for the reasons stated fully in the record” in open court.

“The California Democrat Party put their fist on the scales of justice and injected partisanship into this proceeding,” campaign spokesman John Burke said following the ruling. “Voters have a right to transparent and accurate information about Mayor Faulconer’s record and this decision defies common sense. This is a clear sign that Gavin Newsom’s allies are desperate to save his failing governorship. Change is coming for California and retirement is coming for Gavin Newsom, today’s decision does not change that. He cannot stop this recall.”

Faulconer, a Republican, is one of dozens of candidates seeking to replace Gov. Gavin Newsom if voters choose to recall him in the Sept. 14 election.