NEW YORK (AP) — A federal judge has ruled that Qualcomm unlawfully squeezed out cellphone chip rivals and charged excessive royalties to manufacturers such as Apple in a decision that undercuts a key part of its business.

The decision vindicates the U.S. Federal Trade Commission two years after it filed its antitrust lawsuit against the San Diego chipmaker. It’s a potentially costly setback for Qualcomm, as the decision could slash its ability to extract big royalties from phone makers.

Qualcomm said Wednesday that it would appeal, suggesting the case could still take a few years to resolve.

“We strongly disagree with the judge’s conclusions, her interpretation of the facts and her application of the law,” Qualcomm General Counsel Don Rosenberg said in a statement.

The outcome seems likely to reduce the licensing fees paid to Qualcomm, but it’s unclear if device makers will pass on any of their savings and lower their prices. The royalties represent a relatively small portion of smartphone prices that now top $1,000 for some premium models. 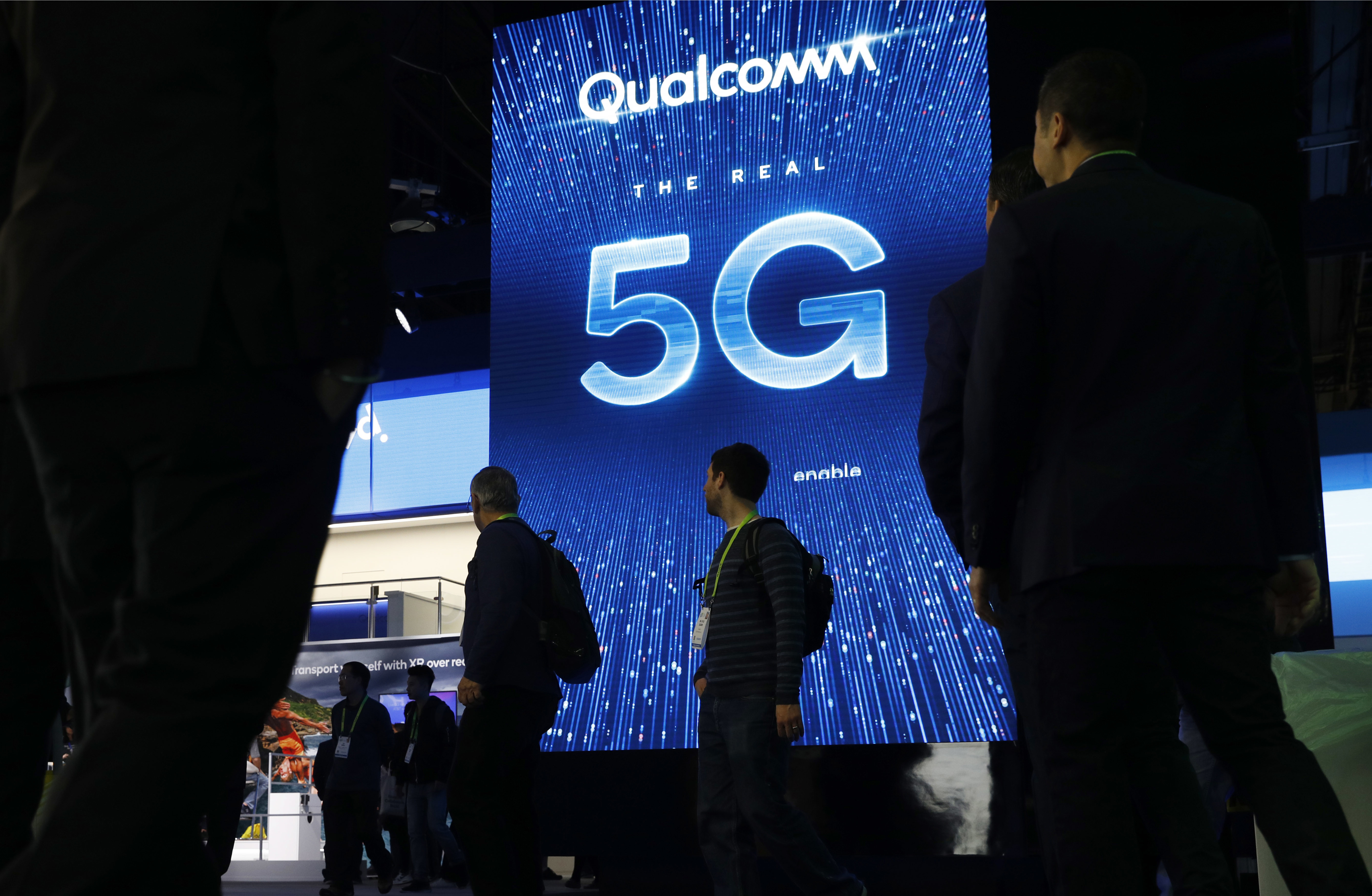 In this Jan. 9, 2019, file photo a sign advertises 5G at the Qualcomm booth at CES International in Las Vegas. Apple and mobile chip maker Qualcomm have settled a bitter financial dispute centered on some of the technology that enables iPhones to connect to the internet. The surprise truce announced Tuesday, April 16, came just as the former allies turned antagonists were facing off in a federal court trial that was supposed to unfold over the next month in San Diego. The resolution abruptly ended that trial. (AP Photo/John Locher, File)

The case has geopolitical ramifications. If Qualcomm suffered a big hit to its profitability, that could mean less spending on research and development — a knock to an American tech icon as the U.S. embarks on a politically sensitive race with China to update to 5G, a new wireless technology.

“The Trump administration views Qualcomm as almost the crown jewel for the U.S. in terms of U.S. technology development. Similar to the way China views Huawei,” said Angelo Zine, CFRA analyst. “It will be interesting to see if this gets revisited.”

Qualcomm’s rivals are mostly Asian companies, including Huawei, Zine said. The Trump administration has set bruising sanctions against Huawei and pushed European allies not to use the Chinese company’s technology due to national-security concerns of China spying. The U.S. government is also in a spiraling trade war with China.

The Trump administration’s attitude to Qualcomm can be seen in a case from last year, when it blocked a Singapore company, Broadcom, from buying Qualcomm over concerns about national security and who would dominate 5G technology.

Qualcomm has justified its “no license, no chips” system as a repayment system for the $40 billion it has spent through several decades working on wireless technology essential to smartphones.

Last month Apple and Qualcomm settled a bitter financial dispute centered on some of the technology that enables iPhones to connect to the internet. The deal requires Apple to pay Qualcomm an undisclosed amount. It also includes a six-year licensing agreement that likely involves recurring payments to the mobile chipmaker.

Apple had already lost an earlier battle with Qualcomm in March when a federal court jury in San Diego decided the iPhone maker owed Qualcomm $31 million for infringing on three of its patents.