BOSTON (AP) – The Latest on the sentencing of actress Felicity Huffman in the nationwide college admissions bribery scam (all times local):

Actress Felicity Huffman has been sentenced to 14 days in prison for her role in the sweeping college admissions scandal .

The “Desperate Housewives” star was sentenced in Boston’s federal court Friday after pleading guilty in May to a single count of conspiracy and fraud.

She was also given a $30,000 fine, 250 hours of community service and a year of supervised release.

She has admitted to paying an admissions consultant $15,000 to have a proctor correct her daughter’s SAT exam answers in 2017.

Huffman said before sentencing that “I am deeply ashamed of what I have done. I have inflicted more damage than I could ever imagine.”

She’s the first parent to be sentenced among 34 charged in the scheme.

The “Desperate Housewives” star is scheduled to appear in Boston’s federal court Friday after pleading guilty to a single count of conspiracy and fraud in May. She’s the first parent to be sentenced among 34 charged in the scheme.

Huffman has admitted to paying $15,000 to boost her older daughter’s SAT scores in 2017 with the help of William “Rick” Singer, an admission consultant at the center of the scheme. Prosecutors say Huffman’s daughter was unaware of the arrangement. 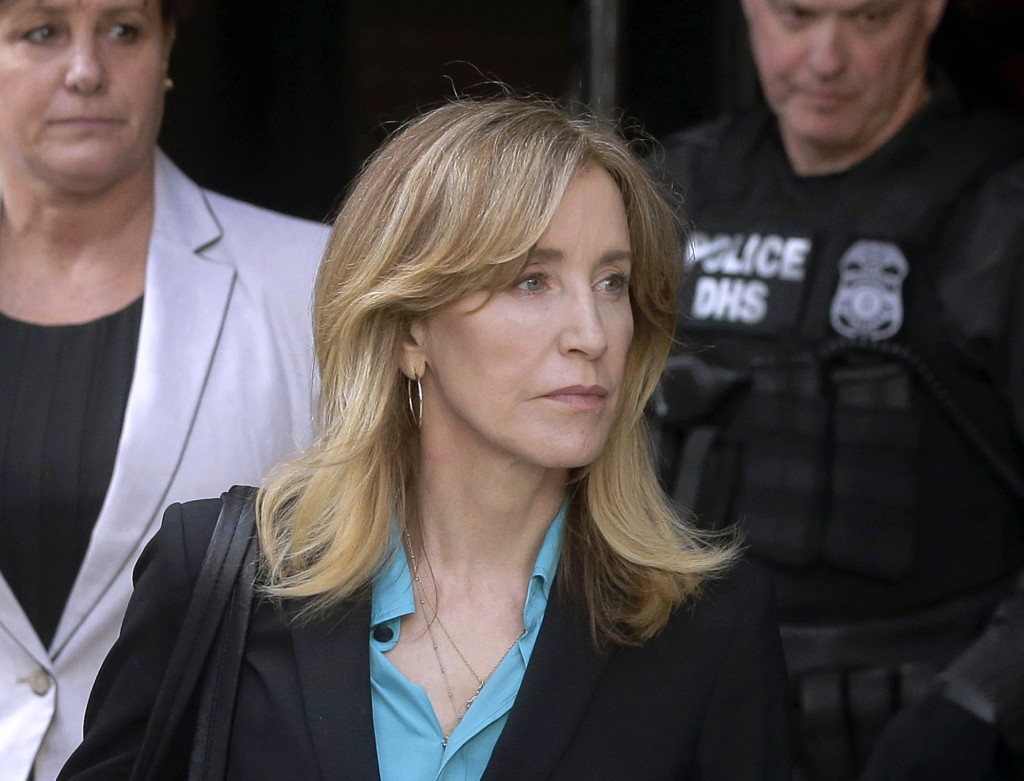 The case is seen as an indicator of what’s to come for others charged in the case. Over the next two months, nearly a dozen other parents are scheduled to be sentenced after pleading guilty. A total of 15 parents have pleaded guilty, while 19 are fighting the charges.

Huffman’s legal team argues that she was only a “customer” in a broader scheme orchestrated by others. In past cases of academic fraud, they said, only the ringleaders have gone to prison.

In a Sept. 4 letter asking for leniency, Huffman said she turned to the scheme because her daughter’s low math scores jeopardized her dream of going to college and pursuing a career in acting. She now carries “a deep and abiding shame,” she said.

Prosecutors countered that Huffman knew the scheme was wrong but chose to participate anyway. They said she wasn’t driven by need or desperation, “but by a sense of entitlement, or at least moral cluelessness.”

The amount Huffman paid is relatively low compared to other bribes alleged in the scheme. Some parents are accused of paying up to $500,000 to get their children into elite schools by having them labeled as recruited athletes for sports they didn’t even play.

Among those fighting the charges are actress Lori Loughlin and her fashion designer husband, Mossimo Giannulli, who are accused of paying to get their two daughters admitted to the University of Southern California as fake athletes.

Authorities say it’s the biggest college admissions case ever prosecuted by the Justice Department, with a total of 51 people charged.

4th of July planning and PEARL loan program in Poway

The Latest: Alaska to require virus tests for air travelers

NASA astronauts blast off into space on a SpaceX rocket, heralding a new era in human spaceflight.

4th of July planning and PEARL loan program in Poway